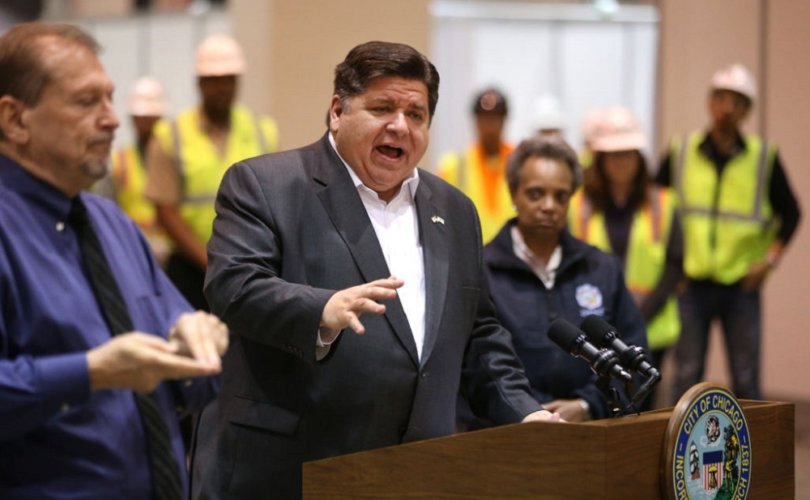 (LifeSiteNews) — Democrat Gov. J.B. Pritzker of Illinois called for a constitutional amendment to ensure abortion access throughout the state.

Pritzker was sworn into office for his second term as governor on Monday. The declaration that his state needs a constitutional “right” to abortion was made during his inaugural address.

“The right to privacy and bodily autonomy demand that we establish a constitutional protection for reproductive rights in Illinois,” the governor said. “The extremists still want to take away a woman’s right to choose and I don’t intend to let them. That’s why, yet again, on women’s rights, Illinois will lead.”

Pritzker added, “If given the chance, a bunch of right-wing judges and legislators will take away women’s rights,” as many critics of the Dobbs decision said about overturning Roe, which ensured a federal “right” to abortion on demand.

“Illinois spoke loudly and decisively in 2022 and declared that in the land of Lincoln, we trust women,” the governor said.

Additionally, Pritzker emphasized the need to “fight against [a] rising tide of hate,” including intolerance and opposition to the LGBT agenda.

“The Illinois Constitution explicitly states that ‘no person shall be deprived of life without due process of law,’” executive director of Illinois Right to Life Mary Kate Zander said in a press release. “Abortion is inherently unconstitutional, as it does exactly this.”

“The Governor’s refusal to acknowledge this fact is politically driven and has no basis in truth whatsoever. His pro-abortion legacy is, in practice, harming women and depriving unborn children of an opportunity at life. This may be politically expedient for Governor Pritzker today, but it won’t age well.”

The pro-life organization added that it “estimates that abortion was a nearly $60M industry in the state in 2020.” According to the release, 46,243 abortions were committed in 2020, with 1,180 committed on girls under age 18. The number of abortions in Illinois also showed “a 16 percent increase since 2015.”

Abortion is currently legal on demand up to viability in Illinois, as well as up to birth for certain “health” reasons. Additionally, minor girls are allowed to obtain abortions without parental consent, a rule that took effect in June 2022.

Pritzker also has a history of promoting pro-abortion and pro-LGBT legislation. In 2021, he signed a bill aimed at “modernizing our sex education standards” and included teaching students how to access abortion, cross-sex hormones, and HIV drugs.

The following year, Pritzker’s family contributed over $20 million to support a children’s hospital in Chicago that actively promotes the teaching of radical gender ideology to minors in the public school system.

Chicago declares itself a ‘sanctuary city’ for abortion, transgender surgeries