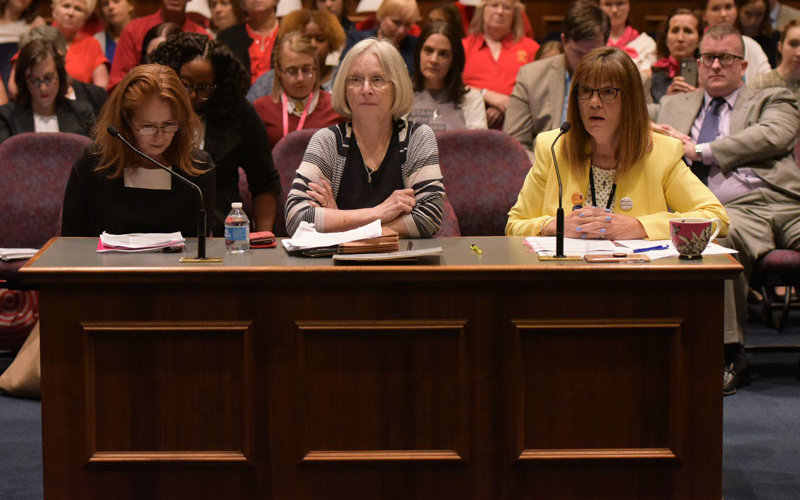 In Illinois, the legislature sent Senate Bill 25, called the Reproductive Health Act, to the governor for approval. The bill seeks to protect the “fundamental rights of individuals to make autonomous decisions about one's own reproductive health.” It passed in the Senate late Friday by a 34-20 vote. Democrat Gov. J.B. Pritzker has vowed to sign the bill, which asserts that the “fertilized egg, embryo, or fetus does not have independent rights.” It would go into effect immediately upon signature.

Democrat state Sen. Melinda Bush released a statement saying, “As states across the country pass dangerous laws restricting access to abortion, we in Illinois are standing with women and guaranteeing access to reproductive health care.”

Bush declared that in view of the “real possibility” the the U.S. Supreme Court may overturn the 1973 Roe v. Wade decision that allowed abortion nationwide, the Reproductive Health Act “guarantees that women in Illinois have the right to make decisions about their bodies, regardless of what happens at the federal level.”

According to the Thomas More Society, a national public interest law firm, the Illinois Reproductive Health Act would:

— Allow abortions for any reason throughout all nine months of pregnancy

— Eliminate any restrictions on where abortions may be performed

— Allow non-physicians, including nurses and physician assistants, to perform abortions, both surgical and medical

— Undermine and threaten institutional and individual rights of conscience

— Require private health insurance policies to include coverage for all abortions, with no exemptions, even for churches and other religious organizations

— Repeal the Parental Notice of Abortion Act of 1995, which has been responsible for a reduction of more than 55 percent in abortions among Illinois minors since 2012.

Under provisions of the bill, parents would be required to pay for a daughter’s abortion even over their objections. According to current state law, “No parent shall be liable for any expense incurred by his or her minor child when an abortion is performed on such minor child without the consent of both parents of such child.”

Republican Rep. Avery Bourne said, “It takes out measures that we have legislated over the years, because we think it’s important to stand up for the people who are impacted.” Bourne is assistant Republican leader in the state House and an expectant mother.

The Thomas More Society described the bill as “the most radical piece of abortion legislation that has ever been introduced in Illinois.” It would establish a “fundamental right” to abortion and prevent the state from interfering in any way in the killing of unborn babies. It would erase criminal penalties for performing abortions and allow non-doctors to do them. The legislation also would repeal the partial-birth abortion ban, abortion clinic regulations and conscience protections for medical workers.

“This bill remains the most radically pro-abortion measure of its kind and would make Illinois an abortion destination for the country,” said Peter Breen, a former Illinois representative and Thomas More Society vice president and senior counsel.

“This bill creates a ‘fundamental right’ for abortion, with the strongest protections in law, above even the First Amendment right to free speech,” he said. “Abortion would become the primary and principal right in Illinois, above all others.”

Today I signed signed 2 important bills that not only will make a difference in the lives of countless Nevada women and men, but also send a message to the rest of the country that Nevada will NOT go backwards when it comes to reproductive rights and health. (1/3) pic.twitter.com/cHCjeGOYQP

At the signing ceremony, Sisolak said, “Nevada has a long history of trusting the women of our state to make their own reproductive health care decisions and protecting the right to reproductive freedom.”

“In light of increasing attacks at the federal level and in other states such as Georgia, Alabama, Missouri, and Louisiana, SB179 reaffirms Nevada's commitment to protecting reproductive freedom and access to reproductive health care,” Sisolak said.

He continued, “I have been disappointed by the recent uptick in efforts in other states to restrict women's right to choose, and I am especially proud today to be a Nevadan, where we protect a woman's right to make her own decisions about her own body.”

The new law allows abortion for nearly any reason and eliminates state laws that required physicians to notify a pregnant mother about the “emotional implications” of an abortion, thereby limiting abortionists’ requirement to “describe the nature and consequences of the procedure.” Also, abortionists would no longer be required to certify in writing a pregnant mother’s marital status and age before performing an abortion.