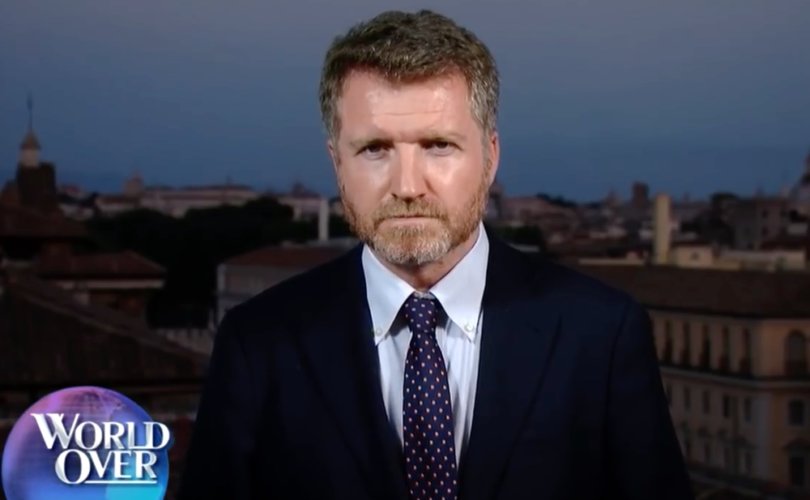 WASHINGTON, D.C., August 31, 2018 (LifeSiteNews) – A Rome-based reporter who helped break the news last weekend of the detailed testimony of Archbishop Viganó about abuse cover up in the Vatican is defending his reporting.

“There are a lot of people who are very upset and very concerned. There’s a lot of corruption there in the Church, and they want it sorted out. And unless it’s exposed, that’s not going to happen. So I’m just really trying to do my job,” Edward Pentin told Raymond Arroyo of “The World Over” Thursday night.

Pentin, the Vatican correspondent for the National Catholic Register (NCR), was one of the reporters to whom Archbishop Carlo Maria Viganò entrusted his explosive testimony alleging coverup and cronyism among several high-ranking prelates, including Cardinal Donald Wuerl, Cardinal Oscar Maradiaga, and even Pope Francis.

Pentin chuckled when Arroyo mentioned Honduran Cardinal Maradiaga’s recent remark that the NCR reporter is a “hitman” and asked him if he were an “enemy of reform.”

“Not at all, no,” Pentin replied. “My job as a journalist is really to draw attention to the truth so that things can be made better.”

“I’m really just trying to expose the truth, so that they can actually tackle these things and reform because there’s a lot of injustice–especially in Honduras,” he said.

According to Viganò, Francis lifted sanctions Benedict XVI had placed on McCarrick and took his advice in filling key episcopal posts in the USA, even though he knew of his sexual predation against priests and seminarians.

“This is certainly a very, very good source who told me that,” said Pentin.

“And it seems very clear that Pope Benedict did impose sanctions. He instructed Cardinal Bertone, who then instructed the Congregation for Bishops, who then told Archbishop Sambi, the then-Nuncio. And then this apparently was passed onto then-Cardinal McCarrick.”

At the start of Thursday’s show, Arroyo described the impact Viganò’s allegation have had on Catholics in no uncertain terms.

“This is surely one of the most traumatic and critical moments in the Catholic Church since the resignation of Pope Benedict XVI,” he told viewers.

Arroyo quizzed Pentin on a statement made by the secretary to both the Pope and the Pope Emeritus. In response to a story in The New York Times, Archbishop Georg Gänswein told a German magazine that Pope Benedict had not “commented on the memorandum of Archbishop Vigano and will not do it.” Gänswein called any assertion that Benedict had done so “fake news.”

However, neither Vigano nor Pentin had claimed that the Pope Emeritus had commented on the document.

“[Archbishop  Gänswein] is exactly right,” Pentin said. “Archbishop Viganò never actually said that Benedict had seen his testimony, and so there was no way that [Benedict] could affirm it….”

“What he didn’t say, and what he didn’t deny,” the reporter added, “is that there were sanctions imposed on Cardinal McCarrick. And that is what I understand to be true. He never denied that, so we stand by our report on that.”

Pentin had discovered that Benedict had placed sanctions on Cardinal McCarrick before Viganò released his testimony. Having been told in advance of the story Viganò was going to make public, the journalist began to look for evidence.

“I wanted to find out before then [the release] just what Pope Benedict knew…. and if there were any sanctions imposed—because if they were and they were lifted, then we need to know really what they were and to what extent they were imposed,” Pentin explained.

“But I found out that Benedict couldn’t really remember what they were.”

The NCR reporter told Arroyo that Viganò is known in Rome for integrity and trustworthiness.

“He is seen as very much a man of great integrity, and someone who’s very reliable and trusted,” Pentin said. “He certainly was seen as that as the Nuncio, and also here [in Rome] beforehand in the Governatorate, which is responsible for a lot of the finances for the running of Vatican City state.”

But Vigano’s very integrity got him into trouble, Pentin explained.

“He stood up against the corruption there, and that’s what led to him being sent to the Nunciature, because [he] was touching on too many truths, which people didn’t like, and so he was forced out…”

Another person of interest in the unfolding story of Pope Francis relationship with Cardinal McCarrick is Monsignor Jean-François Lantheaume, Viganò’s former secretary at the Vatican’s Embassy in Washington, DC. Arroyo remarked that the monsignor had made a short statement attesting to the truth of Vigano’s testimony but seems to be fearing for his life.

“[Lantheaume] said that he had never worked with anyone better than Archbishop Viganò and saw him as a great man of integrity,” Pentin replied. “But he also said on his Facebook page that he’s also afraid for his life if he were to make any revelations, and that’s the same with Archbishop Viganò.”

Pentin thinks that both Viganò and Lantheaume are afraid of the “vindictiveness” of people they had worked with.

“They’re very concerned that scores will be settled by those they have crossed,” he said. “… They see the threat as very real.”

Pentin thinks the Pope is taking his time to react to the scandal, and that his remarks on the plane were a method of stalling for time. He thinks, however, the Pope will take “some kind of action in the coming days.”

Whether or not there will be any kind of action or structural change in the Vatican in response to anger sparked by Vigano’s claims is an open question. Rome is, after all, rather far from the United States.

“People [here] don’t really understand… the anger and the frustration as you would in the United States,” Pentin said, “but they do understand the level of anger, at least.”

However, there have been a lot of scandals and a lot of anger in the past without effecting change, he noted.

“The precedent isn’t all that good,” the journalist concluded.