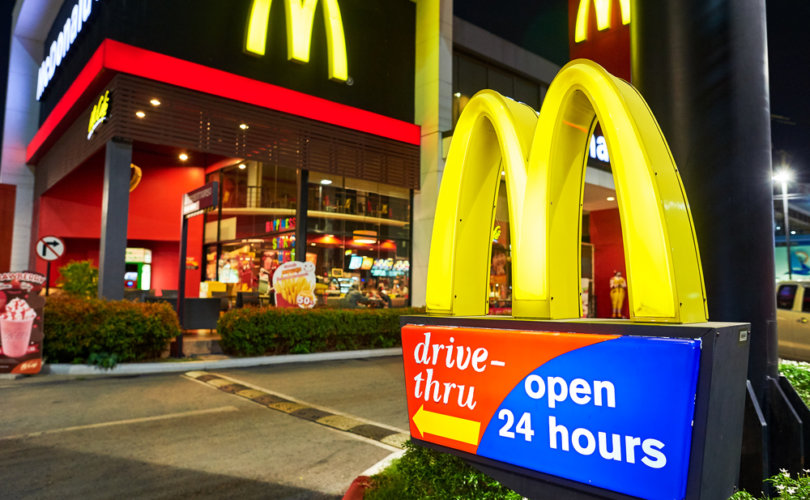 July 18, 2016 (LifeSiteNews) – Customers across the nation learned this year that, when they go to the world's most popular fast food chain, pornography is no longer part of the combo.

McDonald's announced that it is filtering its free Wi-Fi to prevent patrons from exposing children to pornography inside its restaurants.

“I'm lovin' it!” said Donna Rice Hughes, president of Enough is Enough, a nonprofit founded in 1994 dedicated to children's online safety, upon hearing the news. “Parents can have peace of mind that, when they or their children go to McDonald's, they will have a safer and more friendly Wi-Fi experience, filtered from pornography” and “from potential sexual exploitation and predation.”

She called the move an “act of corporate responsibility and commitment to children and family safety.”

McDonald's responded by blocking pornographic websites from Wi-Fi at its corporate-owned stores, which account for about 10 percent of the fast food giant's 14,000 stores in the United States, early this year.

The company, which reported $25.4 billion in revenue in 2015, then offered the safer Wi-Fi to its franchisees, and the majority of its stores now use it, according to a company spokesman.

“I want to publicly thank McDonald’s for making its WiFi safer for its patrons,” said Dawn Hawkins, executive director of the National Center on Sexual Exploitation (NCOSE), “McDonald’s now joins the ranks of other corporations such as Chick-fil-A and Panera Bread, which are all doing their part to address the public health crisis of pornography by proactively filtering pornography on its Wi-Fi.”

“We are in the process of evaluating a global protocol to address this in all of our company owned stores, and are in active discussions with organizations on implementing the right, broad-based solution that would remove any illegal and other egregious content,” a Starbucks spokesperson said in a statement released last Friday. “Once we determine that our customers can access our free Wi-Fi in a way that also doesn't involuntarily block unintended content, we will implement this in our stores.”

Customers, especially those with young children, will thank – and patronize – stores that value the well-being of their customers.