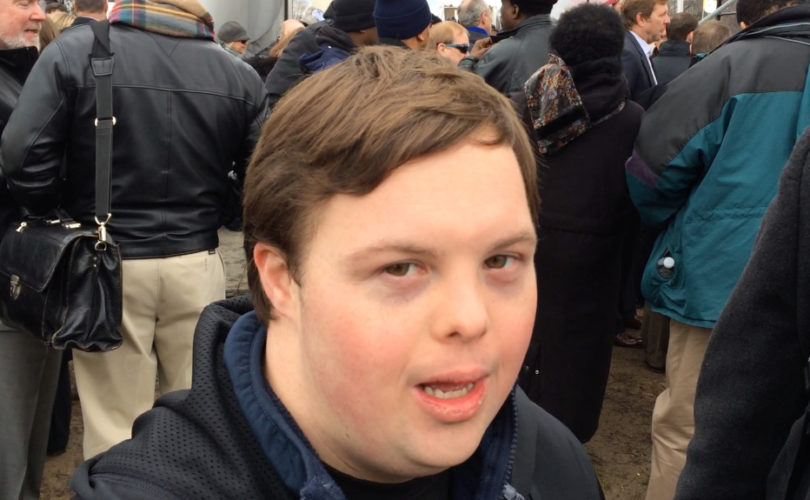 Knowing that up to 90 percent of pre-born babies diagnosed with Down syndrome are aborted, actor David DeSanctis is grateful to be alive.Pete Baklinski / LifeSiteNews

WASHINGTON, D.C., January 29, 2015 (LifeSiteNews.com) — David DeSanctis, born with Down syndrome, will tell anyone that no chromosome abnormality is going to hold him back from living his Hollywood dream.

The 23-year-old recently starred in the independent feature film Where Hope Grows, set to be released this May.

“The movie is about a down and out former baseball player who chokes at the plate, gets sent home, has issues with his teenage daughter, and drinking issues,” DeSanctis told LifeSiteNews in a video interview at the D.C. March for Life last week.

DeSanctis acts in character as a Down syndrome young adult who works in the produce section of a grocery store. His friendship helps lift the down-and-out baseball player out of despair and into a discovery of what life’s really all about.

Knowing that up to 90 percent of pre-born babies diagnosed with Down syndrome are aborted, DeSanctis is grateful to be alive. He attended the March for Life last week in Washington, D.C., as a voice for the defenseless and discarded.

“I’m one of the 10 percent that was not given away at all to abortion. I made it through it,” he told LifeSiteNews.

For more of LifeSiteNews' in-depth, original coverage of the 2015 March for Life in Washington, D.C., click here.