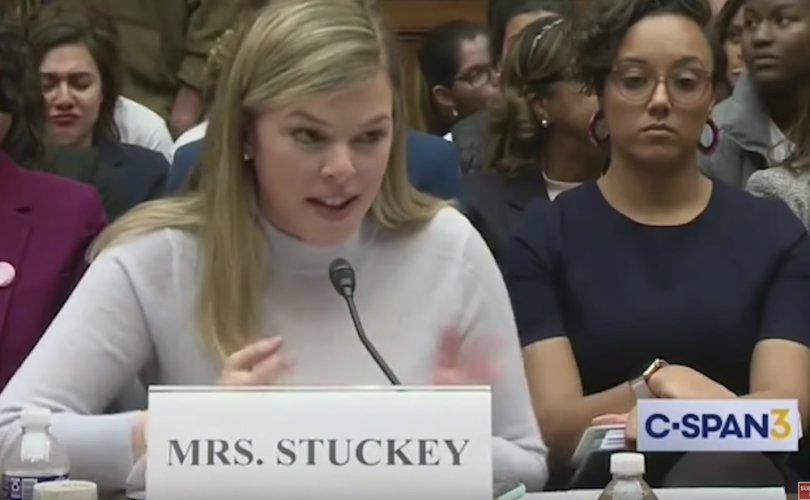 WASHINGTON, D.C., November 14, 2019 (LifeSiteNews) – Blaze TV host Allie Beth Stuckey was the lone pro-life voice during a Thursday hearing at the House of Representatives on state pro-life laws, making the case against abortion amid a panel of industry insiders and apologists.

The Democrat-controlled House Committee on Oversight & Reform held the hearing for the stated purpose of exploring “how state policies — like those in Missouri — are impacting access to comprehensive reproductive health care services, including abortion,” as well as the “federal government’s role in preserving access to reproductive health care services for patients across the United States.”

To support their side, Democrats invited Jennifer Box, a St. Louis woman who has testified at the state level about aborting a wanted baby who had been diagnosed with a “lethal” genetic defect; National Women’s Law Center president and CEO Fatima Goss Graves; Planned Parenthood of the St. Louis Region and Southwest Missouri chief medical officer Dr. Colleen McNicholas; and Marcela Howell, founder and CEO of the black pro-abortion group In Our Own Voice.

Stuckey, whose own daughter was born in July of this year, was the only witness for the pro-life position and the GOP minority.

During the hearing, she called abortion a process that consisted of “tearing a child apart limb by limb.”

Most of the questions and answers cycled through standard pro-life and pro-choice arguments, with Democrats and their witnesses agreeing that even mild abortion restrictions such as waiting periods were burdensome and “medically unnecessary.”

Box justified aborting her daughter rather than delivering her only to experience certain misery and death by claiming that the “greatest act of love would be for us to suffer instead” of her, yet also claimed her story “does not give anyone the right to judge good reasons and bad reasons for abortion.”

At one point, Box expressed indignation at Stuckey for supposedly calling her a murderer, declaring, “I don’t need your approval, Mrs. Stuckey, but I would ask for your respect.” Stuckey responded that she had not done so, and expressed sympathy for Box’s experiences while calling for both parties to an abortion – mother and child – to be recognized.

Most of the pro-abortion testimony came from McNicholas, who represents a scandal-plagued abortion facility currently fighting to keep its license. She dismissed all concerns about the facility as stemming from a politically-motivated “obsession,” and accused health director Dr. Randall Williams of neglecting the “medical ethics he was taught” for his actions, including an invocation of the misleading pro-abortion claim that the state was tracking women’s periods.

Among her responses were claims that mandating basic medical care for infants who survive abortions would “harm” the “environment” for abortionists by creating the impression is a “real thing” (which it is); that Planned Parenthood did not sell (Planned Parenthood officials have been caught on video admitting otherwise, though one claims she was joking); and that abortion is safer than childbirth (a claim based on a controversial and disputed study).

Notably, McNicholas simultaneously claimed that there is no medical consensus on the point of fetal viability, and that viability is the cutoff point for her own abortion practice (the Encyclopedia of Forensic and Legal Medicine says it’s “generally accepted that a 28-week-old fetus that doesn't need resuscitation is viable,” while admitting newborns have been known to survive much earlier). She also refused to rule out aborting post-viability, and answered “I have no idea” to a hypothetical asking whether separate DNA from a mother and child found at a crime scene would be interpreted as belonging to two separate people.

Stuckey, meanwhile, used her testimony to raise awareness of preborn personhood, citing the power of ultrasound images and the way medical advances keep redrawing the “viability” line earlier in pregnancy, as well as arguing that Planned Parenthood is an unnecessary and untrustworthy source of legitimate women’s healthcare.

“I am here as a woman, who believes that female empowerment, equality and freedom are not defined by her ability to terminate the life of her child.”

“It is incomprehensible to me that we are having a debate about whether it was acceptable” to kill a baby after birth,” she said, adding that abortion defenders generally speak in euphemisms because “accurate terminology” doesn’t “make for good PR.”

Stuckey faced some instances of hostility from Democrat committee members, from Rep. Robin Kelly, D-Illinois, accusing pro-lifers of lacking compassion after birth to Rep. Debbie Wasserman Schultz, D-Florida, suggesting she was unqualified to debate the issue:

Dem Rep. Robin Kelly accuses the GOP of not having compassion for people after they're born.

She repeatedly interrupts @conservmillen when she tries to respond to the ridiculous claim, erupts, and then moves on like nothing ever happened.

Rather than contend with my verifiable points, Wasserman Schultz tried to invalidate me personally. Why? Because neither she nor any Dems nor the panelists actually have any kind of logical argument for abortion. That was abundantly proven today. https://t.co/prgWSb34sk

“The pro-abortion argument doesn’t deal with fact, it deals with feeling,” Stuckey said of the pro-abortion witnesses’ testimony, which she surmised was the reason they were so evasive about viability and the details of abortion procedures. “Apparently I’m the only one willing to talk about specifics.”