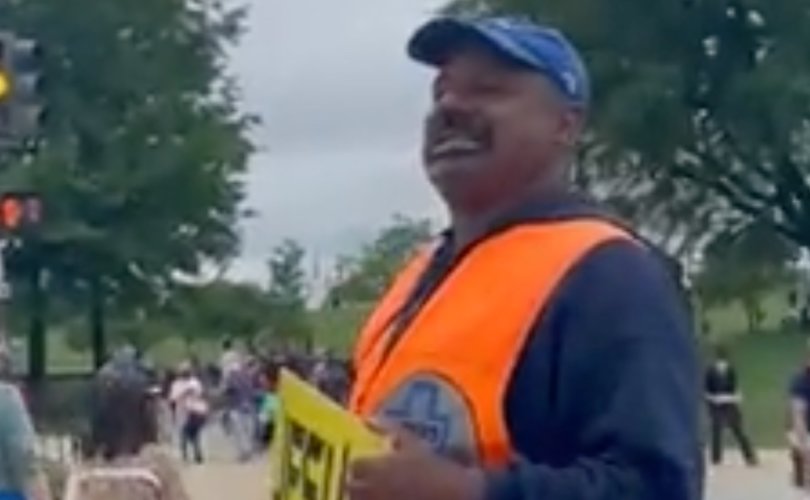 WASHINGTON, D.C. (LifeSiteNews) – A Christian man faced pro-abortion activists offering them love as they swore and told him they hated him.

The black American, who has not yet been identified, greeted the pro-abortion “Bans Off Our Body” protesters outside the Supreme Court in Washington, D.C. on March 14 with a sign reading “Jesus Saves.”

“I’m so glad your mother didn’t abort you,” he said and reminded them that Jesus loves them, as they screamed vulgarities at him.

This man cheerfully spent his day yesterday telling pro-abortion protesters, “I’m so glad your mother didn’t abort you” and reminding them that Jesus loves them. He received a whole lot of vitriol and vulgarity with unmatched cheerfulness. pic.twitter.com/5CuZNmFzFC

Jesus was similarly “pro-choice”, he suggested.

“Jesus said, ‘I put before you life or death. He said, ‘Choose life and live.'”

In response, a white male abortion advocate asked him how he could love Jesus when Jesus was white.

“Why are you making Jesus white or black?” the Christian responded. “Because you’re a racist!”

“Go home!” the crowds screamed as he continued to remind them that “Jesus saves.”

The pro-abortion protest was organized by Planned Parenthood, the Women’s March, and other groups. Rachel Carmona, executive director for the Women’s March, greeted the protesters and promised them that this will be a “summer of rage.”

“We will be ungovernable until this government starts working for us, ungovernable,” Carmona said.

“That’s why we are taking to the streets today in cities all across the country,” she continued.

“It’s why today isn’t just one day of action. It is simply day one of an invigorated movement aligned behind one simple demand, and you all heard it, keep your bans off our bodies!”

“Abortion costs money and is unaffordable for so many who cannot travel hundreds or thousands of miles away for abortion care,” she said.

Abortion significantly targets the black American population; 38.4% of U.S. abortions in 2019 killed unborn black babies even though black Americans are only around 14% of the population.

Saturday’s “Bans Off Our Bodies” protests took place across the country. Since the leaked draft opinion which could overturn Roe. v. Wade, America has seen a surge in pro-abortion demonstrations and vandalism.