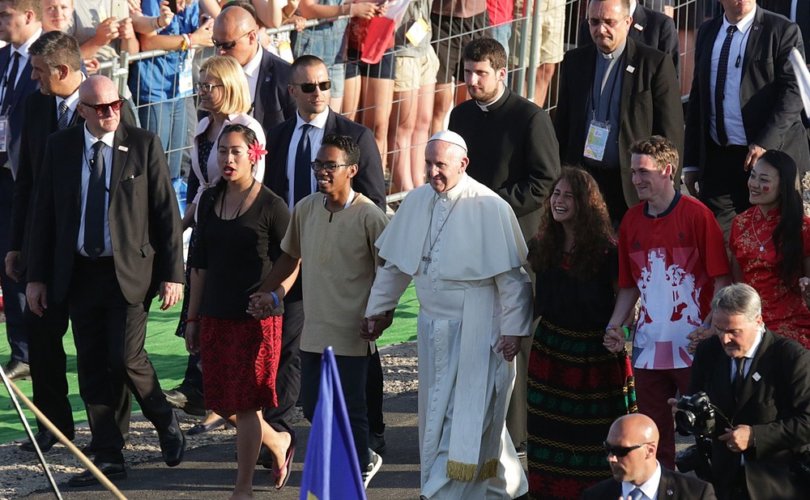 ROME, Italy, December 14, 2018 (LifeSiteNews) – World Youth Day (WYD) 2019 will have immigration, the environment, and the role of women in the Church as its “central themes,” organizers have said.

The event scheduled for January in Panama will be a first test for the principles put forth at the recent Youth Synod, Crux reports.

The issue of women’s roles in the Church was promoted by some at the Synod in conjunction with feminist ideals, suggestive of the ongoing movement for women’s “ordination.”

Archbishop José Domingo Ulloa of Panama said at a Rome press conference that the migration issue would be central at WYD. And besides focusing on young people, the archbishop said the event would put particular emphasis on Pope Francis’s environmental encyclical Laudato Si and Church doctrine.

Ulloa said the issue of the role of women in the Church would also be significant at WYD, because “one cannot conceive a church, surely the one in Latin America and especially the one in Central America, that is not kept together by women.”

“For us the emphasis will be on the role of women,” he said of the forthcoming international gathering for Catholic young people, which will be a “great opportunity to bring forward all the good that women have done through history.”

As a special symbol representing the role of women in the Church, the Crux report said, the first Pilgrim Statue of Our Lady of Fatima, normally enthroned in the Basilica of Our Lady of the Rosary in Fatima, Portugal, will be displayed at WYD January 22 to 27, the first time the statue will leave the country.

World Youth Day Panama follows by some three months the controversial “Synod on Young People, the Faith and Vocational Discernment” in Rome.

The Youth Synod, called with the expressed purpose of addressing challenges faced by young people and assisting in their vocational discernment, ended after some dubious processes, with Catholic principles on sexuality and the Church’s governance and apostolic nature potentially at risk for questionable reinterpretation.

Sections in the final Synod document on sexuality, “synodality,” and the role of women in the Church, along with the document’s deference to its working document (Instrumentum laboris) met with pushback from some Synod fathers but still passed with the required two-thirds majority.

Language in the final document calling for the “presence of women in ecclesial bodies at all levels” – and that their participation be included in “ecclesial decision-making processes” – raised a red flag pertaining to the ongoing campaign by some for women “priests.”

World Youth Day was created in 1985 by Pope John Paul II as a commitment to youth and young adults by the Church, and for young people to gather for prayer, Mass, and to celebrate the Catholic faith. Being a significant gathering of youth has made it the target at times for promulgation of problematic beliefs and principles in regard to sexuality.

This year’s event focusing on the role of women in the Church amid the outcome of the controversial Youth Synod raises again signals of a possible female diaconate.

The push for women deacons is largely regarded as a Trojan horse or side-door opening for women’s “ordination” to the priesthood – not possible as the Church’s divine constitution as given by Christ holds that the Church can confer priestly ordination only on men.

The pope agreed in 2016 to establish a commission to study the role of deaconesses in the early Church after a group of women religious questioned what prevents the Catholic Church from allowing women as permanent deacons.

Pope St. John Paul II, in his apostolic letter Ordinatio Sacerdotalis, wrote that “the Church has no authority whatsoever to confer priestly ordination on women and that this judgment is to be definitively held by all the Church's faithful.”

Because, as the Catechism of the Catholic Church states (CCC 1577), “Only a baptized man validly receives sacred ordination.” The diaconate is included in the sacrament of holy orders, so only men can be ordained deacons. Debate continues over whether deaconesses in the early Church were in any fashion “ordained.”

Austrian Cardinal Christoph Schönborn, a close associate of Pope Francis, has added to speculation about the female diaconate, having expressed hope he might one day “also ordain women to the diaconate.”

More than 47,000 young people from 155 countries have registered to attend WYD, according to organizers, with another 168,000 in the application process.