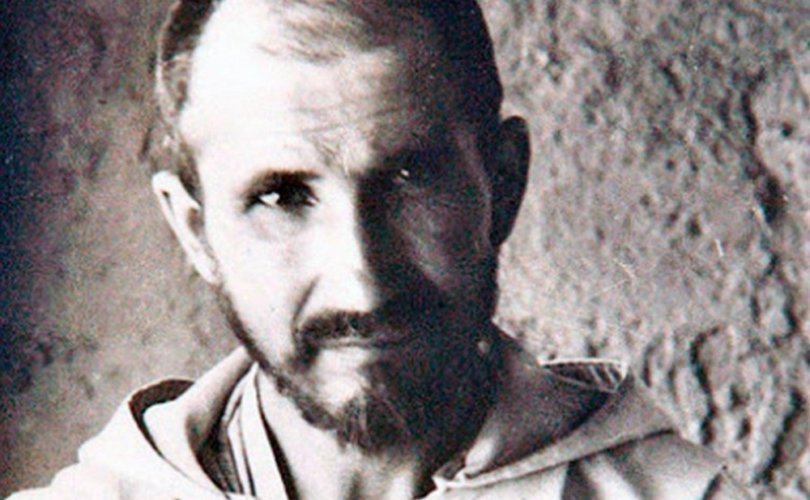 VATICAN CITY (LifeSiteNews) — Impaled by a piece of wood after falling 50 feet, a carpenter returned to work perfectly healthy only eight weeks later due to the intercession of Saint Charles de Foucauld, the French Trappist missionary who was martyred in Algeria in 1916.

On November 30, 2016, a young carpenter named Charle (no –S) fell 50 feet from the scaffolding of a ceiling vault in the chapel of St. Louis high school in Saumur, France, landing on the armrest of a pew below. “This piece of wood went through his abdomen and under his heart and out the back,” his supervisor François Asselin told EWTN in an interview in Paris. “He impaled himself on the wood.”

Although extremely injured, Charle remained conscious after his fall. He got up and walked to find help. He was rushed to the hospital for an immediate operation, but according to Asselin, the doctors found that “no vital organ had been touched, [there were] no after-effects, either of the brain or physical.”

The doctors attested that the fall and impaling should have killed the carpenter, and ordinarily would have caused the organs of the body to burst. However, not only did Charle survive, he recovered in a matter of days.

“Three days later, I tell you,” Asselin declared. “I was in his hospital room, [and] he was talking to me like I am talking to you. The following week, eight days later, he was released from the hospital, and two months later, he was back to work as a carpenter in the company as if nothing had happened.”

After first hearing of Charle’s fall, Asselin’s wife Marie-Claire began praying to Blessed Charles de Foucauld, asking her parish priest at Charles de Foucauld Parish and the Fraternity of Mary, Immaculate Queen for prayers of intercession for the injured man. The accident coincided with the 100th anniversary of the beatus’ death.

Hundreds of parishioners and members of the Fraternity of Mary prayed for Charle’s healing through De Foucauld’s intercession. Later, the carpenter recounted his experience of his fall to Asselin, saying that he “lay flat, put my head in my hands, and abandoned myself.”

To his supervisor, Charle’s words were strikingly similar to a celebrated prayer of St. Charles de Foucauld, which begins “I surrender myself to you.”

“If we look up the Prayer of Abandonment of Charles de Foucauld, you will find these key words,” Asselin said, adding that it was especially remarkable given that “Charle was not baptized; Charle did not know Charles de Foucauld at all.”

The miracle of the carpenter’s survival and perfect recovery was recognized by Rome and led to the canonization of St. Charles de Foucauld on May 15, 2022.

The following is St. Charles’ Prayer of Abandonment:

Father, I abandon myself into your hands; do with me what you will. Whatever you may do, I thank you: I am ready for all, I accept all. Let only your will be done in me, and in all your creatures. I wish no more than this, O Lord. Into your hands I commend my soul: I offer it to you with all the love of my heart, for I love you, Lord, and so need to give myself, to surrender myself into your hands without reserve, and with boundless confidence, for you are my Father.