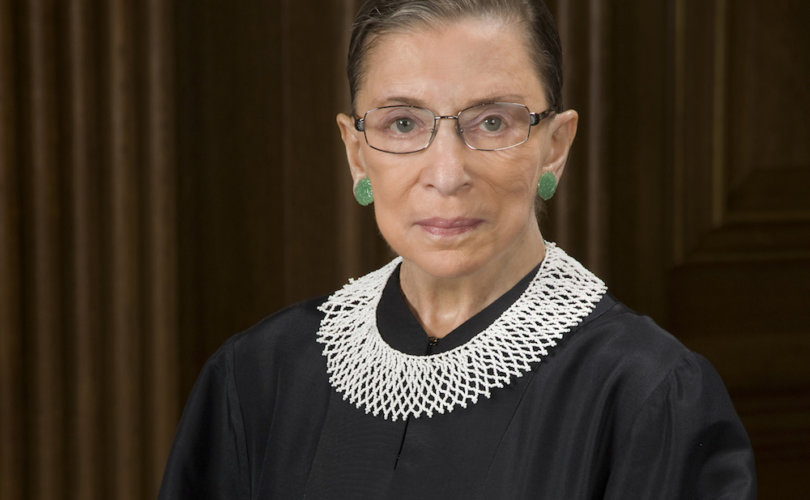 WASHINGTON, D.C., May 19, 2015 (LifeSiteNews.com) – In just a few weeks, the U.S. Supreme Court will decide on the constitutionality of same-sex “marriage.” One justice, however, is continuing to make her opinion known outside the Court.

Last weekend, Supreme Court Justice Ruth Bader Ginsburg presided over a same-sex “wedding” between two men. The ceremony, at least the fourth that Ginsburg has overseen, came just weeks after Ginsburg and her eight colleagues heard arguments for and against the constitutionality of same-sex “marriage.”

It also comes a few weeks before the Court is expected to issue a decision, and is yet another sign that Ginsburg will support redefining marriage.

The justice publicly stated in 2013 that her participation in a gay “wedding” ceremony was “one more statement that people who love each other and want to live together should be able to enjoy the blessings and the strife in the marriage relationship.”

That led a diverse coalition of Americans – including black pastors, jurists, and an organization of 850 rabbis – to demand that Ginsburg and Elena Kagan recuse themselves from the case. Kagan, too, has also conducted same-sex “wedding” ceremonies.

In the most recent ceremony, Ginsburg is reported to have put “special emphasis,” according to The New York Times, on the word “Constitution.” Ginsburg's officiating of the “marriage” described her powers to “wed” the men as coming from the U.S. Constitution.

The calls for Ginsburg's recusal echo what social conservatives urged of Justice Elena Kagan. Last year, the president of the Foundation for Moral Law, Kayla Moore, pointed to the Code of Conduct for United States Judges, Canon 3(A)(6), which states, “A judge should not make public comment on the merits of a matter pending or impending in any court.”

Moore said at the time that Kagan should recuse herself from the then-pending marriage hearings.

However, attorney and blogger Doug Mataconis told LifeSiteNews that the Code of Conduct “technically does not apply to Supreme Court Justices,” though Mataconis also said that justices “seem to typically use” the Canon as “guidelines.”

The libertarian atheist, who supports redefining marriage, also told LifeSiteNews that “judges ought to recuse themselves from a case where they have some interest that would call their impartiality into account, such as a financial interest in a party involved in the case, or a spouse or family member involved in the case in some direct capacity.”

“That's not the case here,” said Mataconis, “because all Ginsburg has really done is perform the function of a judge in presiding over a marriage that is legal under the laws of the District of Columbia.”

Ethics & Public Policy Center president Ed Whelan, however, told LifeSiteNews that “Justice Ginsburg has long recognized her ethical duty not to give any hints or forecasts about how she will rule. But in recent months she has made repeated public statements clearly signaling both how she will vote and how she expects the Court to rule. Her violation of her ethical duty requires her recusal.”

“Her duty to recuse continues throughout the course of the case. It can’t be undone,” said Whelan.

He wrote in February that Ginsburg should follow what the justice said in 1993 as a Court nominee: “A judge sworn to decide impartially can offer no forecasts, no hints, for that would show not only disregard for the specifics of the particular case, it would display disdain for the entire judicial process.”

Whelan's February analysis noted while “it’s not easy for a justice to recuse in a closely divided case that she obviously cares passionately about…this is exactly the situation Justice Scalia faced a dozen years ago in the wake of his public comments criticizing a Ninth Circuit ruling against the Pledge of Allegiance.”

“As Slate’s Dahlia Lithwick wrote at the time, Scalia was 'intellectually honest enough to know that he slipped,' and he thus 'recused himself from what would have been one of the most important church–state cases of his career.'”

Whelan noted that by sitting out the case, Scalia was allowing the possibility of a 4-4 split, in which case the Ninth Circuit's decision would stand. According to Whelan, Ginsburg should have followed Scalia's lead with the marriage case heard by the Court.

Justice Ginsburg: Pro-life laws are a ‘crying shame’ because they make it harder for poor women to get abortions