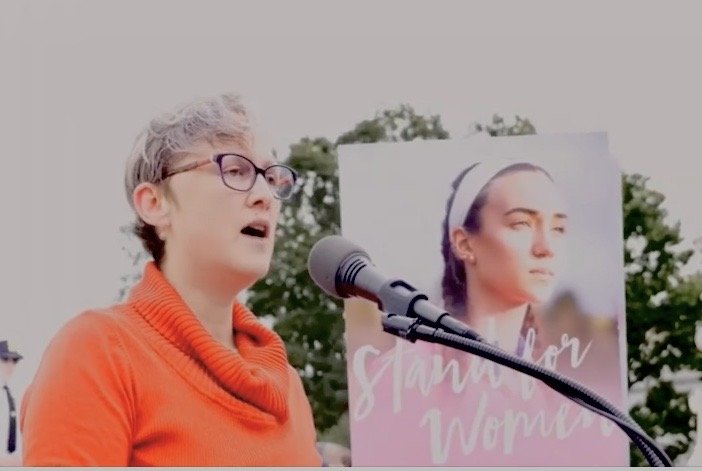 Natasha Chart is the executive director of the Women’s Liberation Front.Screenshot

June 9, 2020 (LifeSiteNews) – An about-to-be-released video documentary challenges the widely-accepted notion that children should be free to choose their gender, often with the help of government ‘protective’ agencies, their schools, and medical practitioners and against the will of their loving parents.

“There are doctors in the U.S. who will go to work today and oversee the chemical castration of little boys, who will put 14-year-old girls into menopause, and give troubled young girls cosmetic mastectomies,” says Natasha Chart, executive director of the Women’s Liberation Front, at the outset of the short trailer for Trans Mission: What’s the Rush to Reassign Gender?

The trailer points out that parents of children expressing gender dysphoria to any degree are often issued dire warnings such as “Your child is going to commit suicide unless you let us put them on puberty blockers,” or asked intimidating, leading questions like “Do you want a LIVE son or a DEAD daughter?”

One mother in the trailer recounts a troubling exchange with a pediatrician: “She said that if I didn’t affirm my daughter’s identity and I didn’t get her the help that she needed – and she killed herself – I was going to feel awfully guilty.”

“The reason I’m being difficult in this is not because I don’t love her,” continues the mother.  “It’s because I love her so much that I am willing to take on this whole ideology just to protect her from potentially making an irreversible decision.”

“I have two children who are currently trans-identified,” Lynn Meagher, another mom featured in the documentary, told LifeSiteNews. “They have been taught by trans-influencers that because I can’t be a cheerleader for (their gender-transitioning) then I’m a ‘toxic bigot.’” As a result, her children have walked out of her life. “We’re currently estranged, and I’m very concerned for their lives, for their health, and for their safety.”

“There’s a lot of fear among a lot of parents that our kids are ultimately going to be harmed by this, not helped,” said Meagher, who started a support group for parents. “I found there are many, many parents all over the world who are really struggling with this, and can’t find a safe place to even talk about it.”

“There’s no other area of medicine where we just charge ahead on an ideological basis without investigating the safety and efficacy of treatments,” noted Meagher, a retired registered nurse.  “That conversation has been shut down because when we try to have it, we’re just screamed at.”

Despite the silencing of many concerned medical practitioners, there are doctors willing to speak out against gender affirmation treatments for kids.

“There is no long-term evidence showing gender affirmation therapy reduces suicide,” explains Dr. Andre Van Mol, a family physician and co-chair of the American College of Pediatrician’s Committee on Adolescent Sexuality, in the video.

“It’s not there,” he emphasized.

“The reality is, we don’t have any long-term studies on children,” cautions another doctor, “and there’s very good reason to be concerned about the outcome.”

BigPharma luring children into a lifetime of pharmaceutical dependence

The documentary is produced by the Center for Bioethics and Culture Network (CBC), which up until now has focused primarily on issues surrounding the often troubling practices found in the fertility industry, surrogacy and women’s rights, and maternal bonding.

“Our reasons for entering into this particular debate are numerous but all equally important,” explained CBC founder Jennifer Lahl in a published statement. “Underscoring all of them are the pharmaceutical industry that continually capitalizes off peoples’ desperation without regard for long-term consequences and the corruption of ‘do no harm’ medicine.

“First, ‘men’ started having babies. Then ‘trans women’ started wanting uterine transplants,” said Lahl. “Then BigPharma started luring children into a lifetime of pharmaceutical dependence via puberty blockers and cross-sex hormones that will render these children permanently sterile before they are even old enough to pierce their ears without parental consent. Doctors will go to work today to perform elective double mastectomies on 15-year-old girls.”

“Did you know that when these children medically and surgically ‘transition,’ they are offered ‘fertility preservation’ so if they want, they can freeze their eggs and sperm to use after they’ve been rendered infertile?” she asked. “If these young girls freeze their eggs before they opt for hysterectomies, who will carry their embryos for their surrogate pregnancies later? Whose sperm will fertilize them? If these males freeze their sperm during transition, whose eggs will they fertilize? Who will gestate these embryos? I hope you can see the connections between the work we have been doing and now this expansion of #BigFertility.”

“We focus on science, technology, medicine, law and a lot around assisted reproduction,” said Lahl. “Our position is never about partisan politics; it’s about the ethical implications people tend to gloss over en route to their desired ends. Bad ideas create victims. Our job at the CBC is to question and challenge bad ideas before people get hurt.”

Beginning June 17, the full documentary, Trans Mission: What’s the Rush to Reassign Gender?, can be viewed via free streaming on CBC’s YouTube channel and Vimeo page.