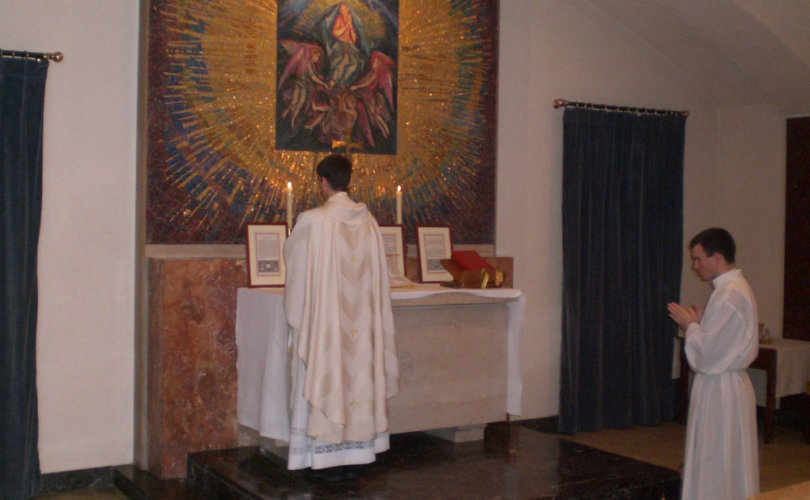 A Traditional Latin Mass is celebrated in the crypt of the North American College in Rome in 2008.John Sonnen/Orbis Catholicus

ROME (LifeSiteNews) – In a moved dubbed as undermining the Catholic Church’s credibility, the rector of the Pontifical North American College cancelled all instructions and celebrations of the traditional Latin Mass in light of the Pope’s recent motu proprio Traditionis Custodes.

Tradition-friendly website Rorate Caeli posted a picture of the memo, dated August 31, and signed by the “Rector,” Father Peter Harman, of the U.S. Catholic seminary in Rome.

Harman noted first how the North American College, or the NAC as it is commonly known, had responded to Pope Benedict XVI’s 2007 document Summorum Pontificum, which described the Novus Ordo as the “ordinary expression” of the lex orandi and stated the rite of 1962 (Latin Mass) was “never abrogated” and was “an extraordinary form.” As a result, the seminary “began official training in the ‘Extraordinary Form’” and made celebrations of the traditional Mass part of the “regular rotation of special Masses on Saturdays.”

In addition, the NAC provided “liturgical supplies” for priests to celebrate the ancient liturgy of the Church.

However, such a practice will now change in light of Pope Francis’s recent motu proprio Traditionis Custodes, which was described as a “severe and revolutionary action” by Cardinal Raymond Burke.

Francis described the Novus Ordo as the “unique” and only expression of the lex orandi, prompting Fr. Harman to write that “the College remains consistent with what the Holy Father has asked of us.”

In place of the traditional Mass usually held on Saturdays at 12:30 p.m., Harman stipulated that the Novus Ordo would be celebrated in Latin.

Fr. Harman’s directive generated a firm response from Rorate Caeli: “This is a very important piece of the puzzle of the systemic cultural genocide Francis is imposing on Traditional Catholics. Our only options are to resist or to die and disappear.”

Popular online blogger and writer Fr. John Zuhlsdorf, known as “Father Z,” also weighed in on the decision, describing the matter: “The craven faculty of the North American College (U.S. seminary in Rome), perhaps under the pressure of their board, has snuffed out the Traditional Latin Mass, which was a regularly scheduled Mass on Saturdays.”

Fr. Zuhlsdorf suggested that the directive would “simply drive learning the TLM underground, as before in the times before Summorum.”

‘A statement of rupture’

LifeSiteNews contacted Fr. Harman and NAC media officer Father David Schunk seeking further comment but did not receive an answer to the questions before  publication.

LifeSite also contacted theologian and columnist Dr. Peter Kwasnieswki, who questioned the “canonical counsel” the College had received. “There have already been many canon lawyers who have come forward explaining the possibilities that the motu proprio allows for keeping the usus antiquior in place,” Kwasniewski noted.

“The step to suppress the ancient Roman rite at the most prestigious seminary for American candidates for the priesthood signifies rather that the administration agrees with Pope Francis that the traditional worship of the Church and the theology it embodies are no longer compatible with modern ecclesiastical life and liturgy. In other words, a gesture and a statement of rupture between the Church’s past and present, which is inadmissible and only serves to undermine the credibility of the Church in the future.”

Echoing Fr. Zuhlsdorf’s words, Kwasniewski suggested that the “policy will backfire, since the seminarians today are by no means naive about what is going on in Church politics; the TLM is already fascinating to them, and this will make it only more so.”

The ban on the Latin Mass will represent a significant change in the College’s weekly custom since the promulgation of Summorum Pontificum in 2007. In 2008, Catholic writer and Rome tour guide John Sonnen described the celebration of a Latin Mass in the College, which was attended by “over 60 seminarians … including the Rector and some staff.”

Sonnen noted how before the Mass began, there was an “instructional time” so the seminarians and attending clerics could become better acquainted with the rite.

Fr. Harman’s suppression of the traditional liturgy is not without precedent. Just days after the Pope issued Traditionis Custodes, some bishops already moved to prohibit or curtail the Latin Mass. One of the first to do so was Bishop Declan Lang of the Diocese of Clifton, England, along with Bishop Anthony B. Taylor of the Diocese of Little Rock, Arkansas.

‘Undermine’ the Church with liturgical ‘rupture’ and scandal

The prohibition on the Church’s traditional liturgy is the latest headline in a year that has seen the NAC make numerous headlines.

Earlier this year, Anthony Georgia, a former seminarian, sued Cardinal Timothy Dolan and the Archdiocese of New York for $125 million, alleging that he was prevented from returning to his studies at an American seminary in Rome because he witnessed the vice rector inappropriately touching another seminarian. In addition to naming Cardinal Dolan, the suit named Fr. Adam Park, then vice rector of North American College (NAC); Fr. Peter Harman, rector of NAC; Fr. John G. McDonald, a lecturer at NAC; and several John Does.

The former seminarian claimed that Park, who was ordained by the disgraced former Cardinal Theodore McCarrick – who now faces charges of sexual assault against a teenager – and Harman were both known by seminarians to have engaged in homosexual activities.

After some months, Fr. Park stepped down as vice rector and Fr. Harman announced that Park would not return for the 2021 academic year.

Contrasting the two news items, Rorate Caeli wrote on Twitter: “So, basically, buggery is fine — the TLM is the problem…”