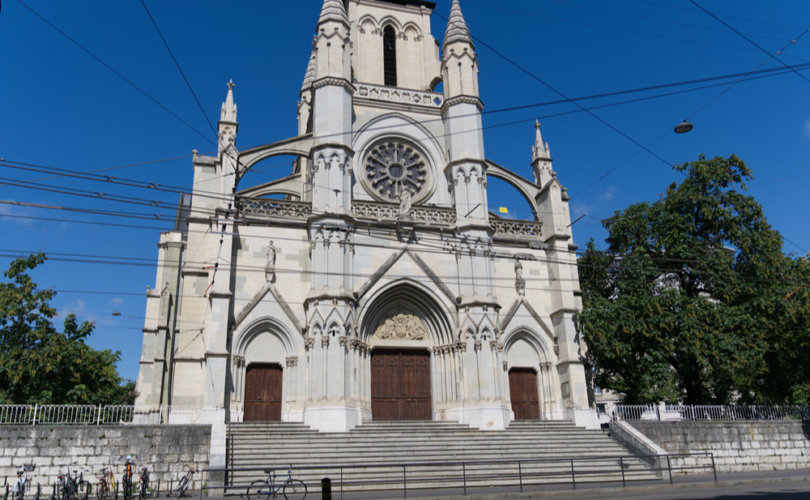 BERN, Switzerland (LifeSiteNews) – Churchgoers in Switzerland are now obliged to use COVID-19 vaccine passports in order to gain entrance to any religious ceremonies with more than 50 people present.

The restrictions on indoor events came into effect September 13.  They order all those aged over 16 to use a vaccine passport in churches, restaurants, and general “culture and leisure facilities,” in order to “prevent hospitals from being overburdened.” Such restrictions are in place until January 24, 2022, but the promise of an early lifting if pressure on hospitals eases has been made.

The measures will divide religious ceremonies into two categories: those without vaccine passports, limited to 50 people wearing mandated masks, and those with the passports.

Reacting to the government’s announcement of such a significant curtailing of civil liberties, thousands of Swiss nationals took to the streets in the de facto capital city of Bern to protest the move.

However, the measures were supported by both the Catholic bishops of Switzerland and the Evangelical Reformed Church of Switzerland, who stated that they welcomed the mandated use of vaccine passports applying only to congregations greater than 50.

In contrast, Chur’s emeritus auxiliary Bishop Marian Eleganti told LifeSiteNews that the measures, and acceptance of them, are a “great injustice” which “contradict the constitutionally guaranteed fundamental rights of citizens.” (See full statement below.)

Many people across Europe have resisted taking the novel medical products called COVID-19 vaccines because thousands of deaths and millions of other injuries following their use have been reported to the European Union’s vaccine injury database. Others object to taking the injections because they were developed or tested with the use of cell-lines derived from aborted babies.

Documents provided by the Swiss Catholic bishops outline the latest restrictions which are being placed upon, and carried out, in all churches across the nation.

Any “religious or church events” which have 51 people or more inside are now required to limit access only to people with vaccine passports. Such “red zones” are areas where vaccine passports are mandatory.

Should an individual attempt to ignore the ruling, he could be fined 100 Swiss francs (around $108) while “[e]stablishments and event organizers who do not comply with the certificate requirement may be fined or even closed down. The cantons are responsible for monitoring compliance.”

The passports are not restricted to those who have been injected, but can also designate those who “have had the disease and have recovered, [and those who] have recently tested negative.” The tests, while currently free, will no longer be free this October, in an incentive to push COVID-19 vaccination.

In contrast, a “green area,” where passports are not required, allows churches and other venues to hold ceremonies attended by no more than 50 people, including the priest, servers, and choir members. At such events without passports, attendees are required to wear masks, and strict requirements are laid out as to what constitutes an acceptable face covering.

Children under the age of 12 are exempt from masks, as are certain other people upon presentation of a medical exemption certificate, or if they are performing key roles in the ceremony.

The group must also keep to no more than two-thirds of the church’s capacity and maintain a physical distance of 1.5 meters between households. The limit of 50 attendees without passports at religious events, or other similar meetings, is to “protect fundamental rights,” writes the Swiss Federal Council.

Regardless of the use of vaccine passports, worshippers will have to provide their name and contact details.

The effect which such restrictions will have upon churches is significant. LifeSiteNews spoke to one Catholic in Switzerland, who voiced concerns about the number of Catholics in the country who did not wish to take the injection, which has significant moral and safety concerns. These Catholics “won’t be able to participate in the celebrations that they used to attend, and they will have to find a church where they don’t require the certificate,” attested LifeSiteNews’s source.

Local news outlets report that churches will take a staggered approach, with some holding weekday Masses and ceremonies without vaccine passports, at the sub-50 capacity limit, while using vaccine passports at the weekends. This was confirmed by LifeSite’s source, who explained that the local priest would offer two Masses per month on different Sundays, for the people without a vaccine certificate, but the remainder of the Sunday Masses would take place with passports being used.

The use of vaccine passports is not limited to churches and other public buildings, but extends even to individuals’ homes, where groups of no more than 30 people will be allowed to gather without showing a passport.

Ecclesial acceptance of measures ‘a captivity to political authority’

Despite the severe restrictions being imposed upon churches, the Swiss Conference of Bishops (SCB) issued a joint statement with the Evangelical Reformed Church of Switzerland (ERCS) in support of the measures. They welcomed the increased number of permitted attendees at a religious ceremony which did not use vaccine passports, claiming it as a victory due to their intervention.

“The national churches are grateful to the Federal Council for considering access to church services and other religious events to be important and for requiring a certificate only for 50 or more people,” read the statement. The SCB and ERCS added that they “consider it their duty to be able to continue to hold safe church services that are open to all people. They will do their utmost to avoid contamination of participants in these services.”

The bishops did, however, criticize the government for not excluding funerals from the new measures, saying that the “possibility of mourning and saying goodbye together is an essential element in dealing with personal and social crises.”

Their general acceptance of the measures by the SCB was not shared by Bishop Marian Eleganti, auxiliary bishop of the Diocese of Chur from 2009-2021, who described the measures as “a kind of captivity to political authority.”

Speaking to LifeSiteNews, Eleganti stated: “The actions of governments are a great injustice in many countries worldwide and contradict the constitutionally guaranteed fundamental rights of citizens, which, as we know, are protective rights against state encroachment.”

“Anyone who looks at the figures of this pandemic and takes a close look at how these figures are collected and presented will recognise the unscientific and interest-driven approach of the actors and their professional PR machinery,” he added.

“The real viral events and their extent are not presented because of the manipulations. Nobody knows it.”

The emeritus bishop called for “appropriate measures” instead, saying that the “data would have to be collected in a different way, namely clinically, and not only through mostly unsuitable laboratory tests that have been subjected to strong manipulations. Then appropriate measures could also be taken, but these would have to respect freedom of religion and worship.”

Continuing, he criticized the submission of the Church to the dictates of the government, saying:

The Church has placed itself in a kind of captivity to political authority in order to seemingly submit to its health policy in a bourgeois way. In so doing, the Church itself relativises the meaning and power of the sacraments by subjecting their administration to arbitrary and contradictory state measures with the result that many believers are deprived of the sacraments and common sense often falls by the wayside. The same applies to the power of faith, which sees in the sacraments the present Christ, the only one who can save us. One waits in vain for this witness of the Church, in my view a fall from grace.

LifeSiteNews contacted the SCB seeking further comment on the matter, but was unable to reach a spokesperson.