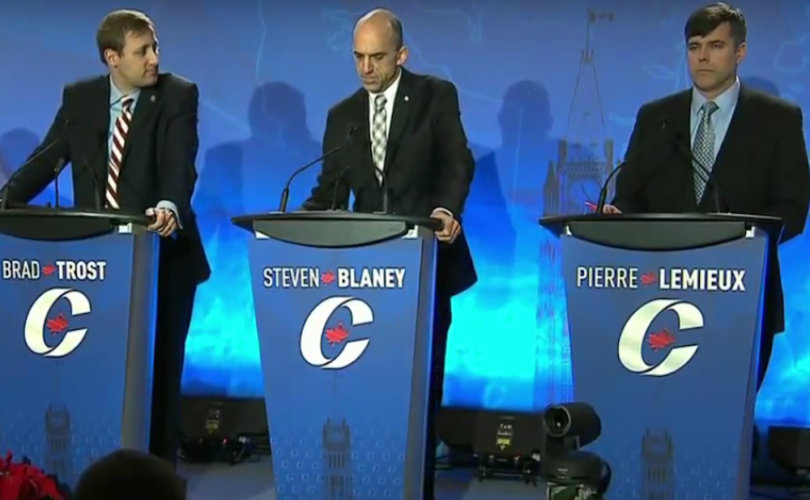 And just how welcoming the party will be to social conservatives under a new leader came up when the candidates — who now number 14 — were asked how they would promote unity in a party that “historically” has “suffered from ideological splits and infighting.”

That’s code for the rift between social and fiscal conservatives, which notably erupted at the Tory convention in May when delegates nixed a longstanding policy supporting the definition of marriage as between one man and one woman, to the delight of the LGBTory contingent.

Endorsed by Campaign Life Coalition (CLC) for his pro-life, pro-family policies, Trost said he heard from many “social conservatives like me” after that convention who said they “wanted to leave the Conservative Party because they felt their views were being disrespected.”

“I encouraged them to stay, and one of the reasons I’m running today is because all branches of Conservatives need to be part of this party,” stated the 42-year-old former geophysicist and father of one, adding that he was both a fiscal conservative — low taxes, cutting regulations, strong on national defence — as well as a social conservative and “supportive of traditional conservative cultural values.”

Also endorsed by Campaign Life, Lemieux echoed a number of candidates when he declared that “we want all views in our party.”

But Lemieux, who lost in the 2015 Liberal sweep after three terms as a staunchly pro-life MP for an Ottawa-area rural riding, took it further.

“It is undemocratic to say that a debate is over, that it is closed, that it will not be reopened under any circumstances,” he said.

That could have been a shot over the bow at Saskatchewan MP Andrew Scheer, who has stated he will not reopen the debate on abortion or homosexual “marriage,” because the caucus and the party had agreed these issues were settled.

CLC consequently declined to classify Scheer, a 37-year-old Catholic father of five with an untarnished pro-life voting record during his 12 years as MP, including five as Speaker of the House, as a supportable candidate.

Lemieux, 53, stated during the debate that he would fund palliative care “so that Canadians will never find themselves in a situation where they are considering assisted suicide.”

He also supports conscience rights for healthcare practitioners, who “should have the freedom to provide excellent healthcare for Canadians without being required to act against their deeply held convictions.”

Also, like Scheer, a Catholic father of five, Lemieux came out strongly in support of parental rights.

“Parents are the first educators of their children,” he asserted. “I would ensure government never places itself between parents and their children.”

For his part, Scheer, who at last count was endorsed by 18 MPs, asserted the party needs to “keep every single kind of conservative not only in the tent but excited about working in the next election.”

“I can keep every kind of conservative united on the things that bring us together,” he said. “Conservatives like to talk a lot and fight a lot about all the things we disagree on, but there’s so much more we do agree on … and that’s how we win. We always lose when we're divided.”

Quebec MP Stephen Blaney similarly emphasized that the Conservatives were united against a common enemy: “We hate deficit, we hate Liberal shenanigans, and we hate wasteful spending. We all agree on that.”

Moreover, “there’s something that makes us different from all other parties in this country — we respect independence on moral issues, and this is very important to me,” Blaney said.

Indeed, pro-life convictions are a disqualifying factor for aspiring Liberal candidates, and the NDP has long been officially pro-abortion.

A fiscal conservative, Chong said he “believes in the right of social conservatives to express their views on matters of conscience and vote accordingly, and my record demonstrates that I’m willing to stand up for those rights.”

However, Chong, who has been red-lighted by Campaign Life for a consistently anti-life voting record, also invoked former Prime Minister Stephen Harper.

“I believe that the way forward for our party is not to focus on divisive social issues but to come forward with a robust economic agenda to create jobs and economic growth across this country,” Chong said.

The Harper PMO pressured backbench MPs and his cabinet to vote against Stephen Woodworth’s 2012 motion to study when life begins, for example, Fonseca said.

The “superior candidates by far are Trost and Lemieux, who are openly pro-life; they respect life and they both say they would like to see respect for life enshrined in law and in our culture,” he told LifeSiteNews.

Fonseca urged pro-life and pro-family advocates to join the CPC, noting that the deadline to buy a members is March 2017 in order to take part in the May 27, 2017, leadership election.

“This is a rare and golden opportunity as we’ve never seen before in Canada’s history to elect a pro-life, pro-family leader of the Conservative Party, and hopefully, prime minister,” he said. “Seize it. Seize it.”

For information on signing up to support Trost or Lemieux, go here.