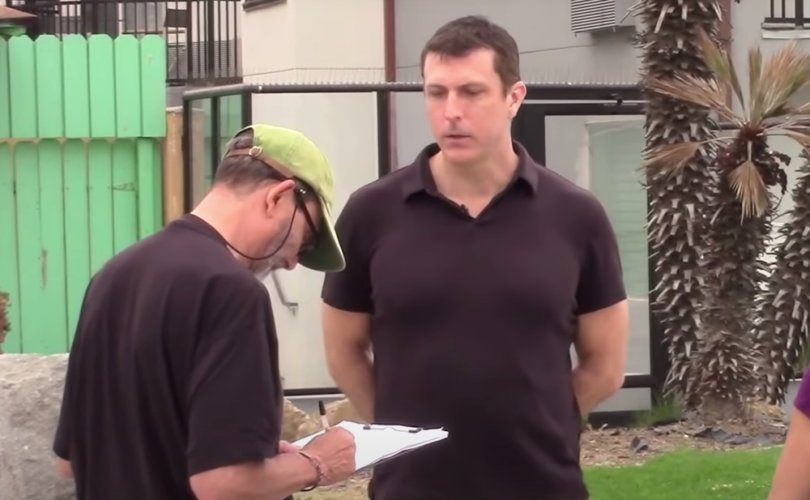 YouTuber Mark Dice showed that at least 14 passersby appeared to have no qualms about signing a petition to arrest all unvaccinated adults.Mark Dice / YouTube

While a few scorned the petition, Dice showed that at least 14 passersby appeared to have no qualms about signing. Some even enthusiastically praised the “effort” to arrest those who haven’t received a COVID-19 jab.

As he asked beachgoers to sign, Dice advocated for the arrest of “anti-vaxxers” with a deadpan delivery, and most of the passersby shown didn’t question the petition’s authenticity.

“Drastic measures need to be taken. These people can think about what they’ve done when they’re sitting in jail,” said Dice as one young man signed the petition.

“So we’re going to put them in jail if they continue to refuse,” Dice said to one woman. “There will be a 30-day window where they can go get vaccinated before they’re arrested. But until then, we’re going to take care of them.”

Dice said to a young man, “I don’t want to hear any of this ‘My body, my choice’ stuff in today’s new world order. We’re going to put things right.”

“I feel you; we don’t need that,” the man replied.

A few women refused to sign, but it was men who were the most outspoken in objecting to the petition.

“Are you kidding me? That’s fascism, man,” said one.

“You’re a scumbag, dude,” exclaimed a young man with a surfboard.

Another man said, “This is a joke, right?”

“Oh, it is a joke, actually. Oh, you’d be surprised at how many people – all these people signed and agreed,” said Dice, showing him the petition.

“They’re all idiots,” said the man.

“They are all idiots,” agreed Dice. “Thank you for not being one.”