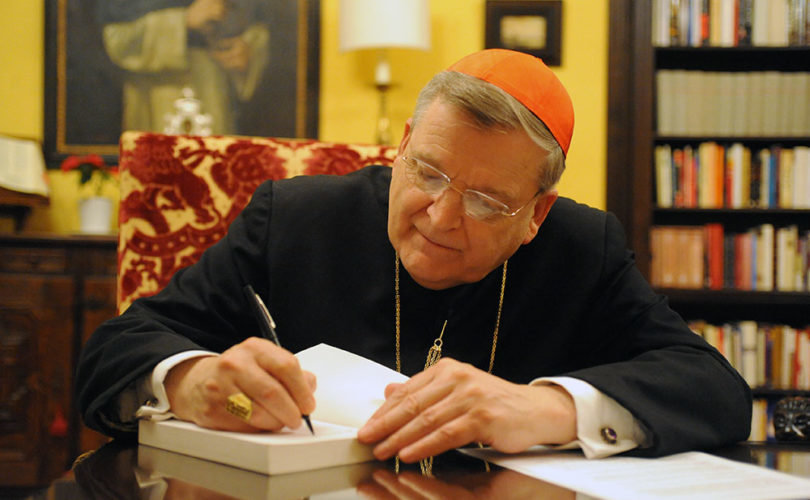 Note: Sign the petition to Pope Francis on the Synod and the future of the family, also signed by Cardinal Burke, here.

ROME, March 24, 2015 (LifeSiteNews.com) — In an interview with LifeSiteNews Paris correspondent Jeanne Smits, Cardinal Raymond Burke warns that confusion is spreading among Catholics regarding divorce and homosexuality.

In a wide-ranging interview published today in full on LifeSiteNews, the cardinal, who until recently was the head of the Vatican’s highest court, spoke of the “manipulation” that took place at the Synod of Bishops in October and also addressed contraception.

Smits simultaneously published a French version of the interview on her blog.

Pointing to bishops whose statements in favor of homosexuality have gone “undisciplined,” Cardinal Burke said it was evident that “confusion is spreading, really, in an alarming way,” in the Church.  And the confusion is having adverse effects. “I hear it myself: I hear it from Catholics, I hear it from bishops,” he said. “People are claiming now, for instance, that the Church has changed her teaching with regard to sexual relations outside of marriage, with regard to the intrinsic evil of homosexual acts.”

Cardinal Burke noted that while previously the “authority of the Church prohibited certain discussions,” now Catholics feel free to dispute even settled Catholic teaching such as that forbidding contraception.

Speaking of manipulation at October’s Extraordinary Synod of Bishops, Cardinal Burke said, “It's clear to me that there were individuals who obviously had a very strong influence on the synod process who were pushing an agenda which has nothing to do with the truth about marriage as Our Lord Himself teaches it to us, as it is handed down to us in the Church.” He explained further, “That agenda had to do with trying to justify extra-marital sexual relations and sexual acts between persons of the same sex and, in a way, clearly to relativize and even to obscure the beauty of the Church's teaching on marriage as a faithful, indissoluble, procreative union of one man and one woman.”

One of the frequent lines at the Synod from those who were suggesting change was that the change was merely pastoral and never doctrinal. For Cardinal Burke however, that “simply is a false distinction.” “There cannot be anything that's truly pastorally sound which is not doctrinally sound,” he added. “And so to say that we're just making pastoral changes that have nothing to do with doctrine is false.”

The cardinal encouraged married couples to be generous in having children, dismissing false notions of the ecological need for population control. “The truth is that if God has called a couple to marriage, then He is calling them also to be generous in receiving the gift of new human life,” he said. “And so we need many larger families today, and thanks be to God I see among some young couples today a remarkable generosity with regard to children.”

Burke said he was “very concerned” that “people are being led in a false way to think that they should practice some form of birth control in order to be responsible stewards of the earth.” Rather, “the fact of the matter is that the birthrate in most countries is far below what it needs to be to replace the present population.”