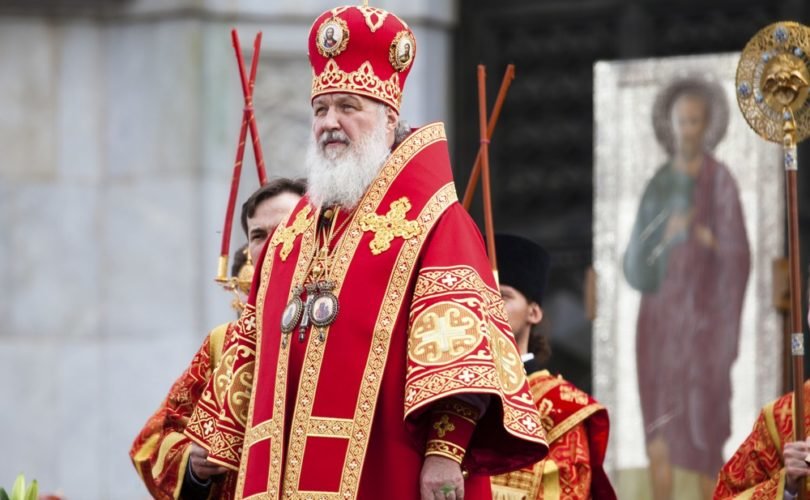 Russian Patriarch Kirill holds a vigil "in defense of the faith" in Moscow on April 22, 2012.Nickolay Vinokurov / Shutterstock.com

MOSCOW, January 26, 2015 (LifeSiteNews.com) – In the first-ever speech by a leader of the Russian Orthodox Church to the Duma, Patriarch Kirill has called on the Russian government to build on its support for the family and traditional marriage by defunding abortion in the country, with the objective of eliminating the killing of pre-born children altogether.

“If we manage to cut the number of abortions by 50 percent we would have stable and powerful population growth,” said the patriarch of Moscow and All Russia.

“The argument that a ban would cause an increase in the number of underground abortions is pure nonsense. People have to pay money for these operations and our task is to make the price of a legal infanticide the same as of the illegal one. Taxpayers must not pay for this,” the Orthodox Church leader told the MPs.

Patriarch Kirill said that while the solution to Russia's impending demographic disaster is complex, the most pressing need is, apart from banning or at least restricting abortion, for the state to help young couples regain the confidence they need to want to have children by providing material support, and by giving doctors additional incentive to care about the life of “conceived children” by introducing pro-life ethical norms in the medical professions.

The Russian patriarch also condemned the practice of surrogacy in his parliamentary address, urging lawmakers to take steps to completely replace it with adoption.

Momentum to eliminate abortion in Russia has been building for several years, with both religious and political leaders calling for legislative changes to defend life from conception.

Last August, the abbot of Vatopedi Monastery, Archimandrite Ephraim, said Orthodox Christians should actively strive for a ban on abortions.

“It is unacceptable that such terrible crimes as abortions are committed in Orthodox countries, moreover, in such large quantities! This phenomenon must make us think seriously about it; I would say, we must be shocked and distressed, we need to raise the alarm,” the Archimandrite wrote in an address to participants of the international pro-life conference with the title “Large Families and the Future of Humanity” that took place in Moscow last year.

In 2013, the Russian Federation enacted a law banning abortion advertising in an effort to stem the country's decline in population.

The head of the State Duma Committee for Family and Children, MP Elena Mizulina, said the Russian people must stop tolerating abortion and the recent rise in surrogacy because they threaten to “wipe out the population of Russia.”

“The problems of abortion prevention and the shift in public opinion towards abortion are currently very urgent. Although the number of abortions in Russia is falling, it still exceeds 5 million every year,” Mizulina said.

She added that though the practice of surrogacy was relatively new in Russia, the societal implications are of great concern to her.

“We still can stop the consequences of this practice from happening. It can and must be used only in exceptional cases,” Mizulina explained.

“Humanity will probably understand one day that as we ban nuclear weapons to prevent the death of Mother Earth, so should we ban the technology destroying the natural environment and natural childbirth, the natural way of human reproduction,” the MP said.

On the website of the Moscow Patriarchate, Patriarch Kirill has proposed a series of measures, including asking that the Ministry of Health and Social Development make “preservation of pregnancy a priority task for the doctor” and ban “medical initiatives on its interruption.”

He urges the state to end health insurance coverage of abortion except in cases of direct threat to mother’s life, and to institute a compulsory two-week waiting period after an “informed consent” form is signed by the mother, before an abortion can be performed. The Patriarch observed that, “this period exists in developed countries.”

Kirill also suggested the establishment of crisis pregnancy centers in every maternity hospital, with trained professionals on hand to help “lonely mothers in difficult life situations.”

From Russia the anti-family poison spread, and now from Russia comes the antidote
Russia bans ads for abortion
Put a crisis pregnancy center in every hospital says Head of Russian Orthodox Church