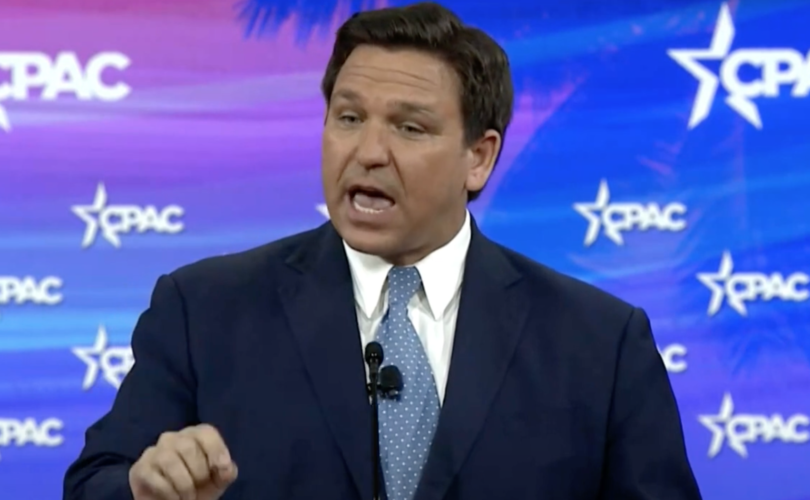 ORLANDO, Florida (LifeSiteNews) — “Let me welcome you to the freest state in these United States,” began Gov. Ron DeSantis at the outset of his address to CPAC on Thursday. “We refused to let this state descend into some type of Faucian dystopia where people’s freedoms are curtailed and their livelihoods are destroyed.”

“We protected people’s rights, we protected people’s jobs, we protected small businesses, and we made sure that every kid in the State of Florida had an opportunity to go to school in-person five days a week,” explained the Florida governor. “In Florida, we reject the biomedical security state which erodes liberty, harms livelihoods, and divides our society.”

DeSantis said that his state has banned vaccine passports and mandates “because it’s unacceptable to subcontract out Fauci-ism to big companies.”

“Florida has defeated Fauci-ism,” declared DeSantis to the cheers of the crowd. “Freedom has prevailed in the sunshine state.”

Recounting President Dwight D. Eisenhower’s warnings about the military-industrial complex, DeSantis said “there’s a danger that public policy can be held captive by the scientific elite.”

DeSantis explained that over the last two years, many of the nation’s governors deferred to health bureaucrats because it was a “safe” thing to do politically.

“I really believe that if Florida had not led the way, this country could look like Canada or Australia,” said DeSantis.

“As Biden flounders, Florida is leading on issue after issue,” he said. “We have the largest budget surplus and the lowest per capita tax burden in the entire United States.”

He noted that the state was one of the first to protect women’s athletics. “We’re not going to let our young girls and our women athletes have opportunities denied to them because of [gender] ideology and political correctness.”

“We were the first big state to legislate against Big Tech censorship, because they want to silence us, they want to de-platform us, and we cannot have a free society if most of the speech in this country is controlled by a handful of leftwing oligarchs in Silicon Valley,” DeSantis said.

“We have banned ‘Zucker bucks’ in the State of Florida. We’re not going to let a Tech titan commandeer the machinery of our elections by pouring hundreds of millions of dollars in for partisan purposes.”

Wokeism is the new religion of the left, a form of cultural Marxism. Proponents of this ideology want to “erase history, delegitimize our founding institutions” and replace them with their leftwing ideology as the founding principles of our modern-day society. “Wokeism is not just about raising taxes or bad economic policy; it’s about tearing at the fabric of our society and trying to replace it with something that will be much, much more sinister.”

“Put on the full armor of God. Stand firm against the left’s schemes,” he urged.