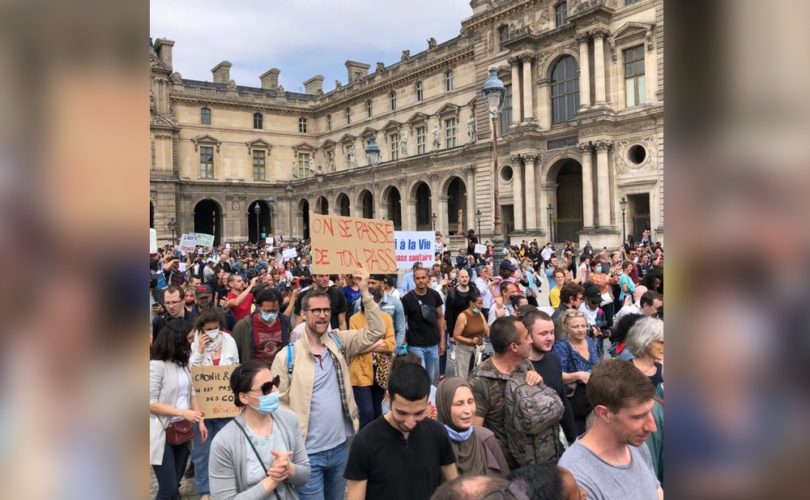 FRANCE, July 20, 2021 (LifeSiteNews) – Hundreds of thousands of people took to the streets in several hundred locations in France on Saturday afternoon to demonstrate against the government’s intention to set up compulsory COVID-19 “vaccination” and COVID-19 status rules obliging all citizens to show a QR-code sanitary pass every time they go to a large shopping center, a restaurant, a café, a bar, a cinema, a theater, a hospital, cultural and leisure venues receiving more than 50 visitors, or want to use long-distance public transport.

The turnout was remarkable, given that on a Saturday in the middle of July, vacations are in full swing and many families are on the road, on their way to their yearly holiday in the country, the mountains, or at the beach.

Chanting “Liberté, Liberté!” from Nice in the far south to Lille way up north in just about all the provincial and departmental capitals all over France – and other towns besides – crowds of people of all social categories rubbed shoulders in full agreement over the iniquity of a law they want to see struck down. The vaccinated were welcome; the idea was not so much, at this point, to underscore the dangers of the experimental “vaccine,” as to fight the setting up of a fractured society with discrimination on an unprecedented scale, where people are being “blackmailed” to receive an experimental injection whose medium- and long-term effects are totally unknown.

All this in the name of the so-called “Delta” variant of SARS-CoV-2 which is more contagious, but much less severe than the already not-so-deadly original form of the disease.

According to official Interior ministry numbers quoted without question by the mainstream media, only about 110,000 people joined the peaceful marches throughout the country. State TV even said “several thousand people.” This is nonsense. Photos of just one of the three demonstrations that took place in Paris show that the one organized by Florian Philippot, leader of Les Patriotes, and joined by Fabrice Di Vizio, who is set to initiate proceedings this Tuesday to prove that the sanitary pass is illegal, showed a crowd larger than that.

Only a handful of political leaders took part, such as Martine Wonner, member of the National Assembly and a former representative of Macron’s “La République en Marche” party. She is one of the most outspoken anti-COVID tyranny voices in the French Parliament.

There were protests in major towns such as Marseille, Nice, Lyon, and Strtasbourg.

In Bordeaux, where the rally had been banned by the local authorities, 1,200 people (according to the police who notoriously underestimate the numbers) still turned out to decry Macron’s “dictatorship.” In every town turn-outs were impressive, with dense crowds of thousands even in the smaller venues.

I joined the demonstration in Vannes, a medium-sized town (to French standards) of some 53,000 inhabitants on the south coast of Brittany, where the local mainstream press, impressed by the density of the march, spoke of a crowd of “3,500.” My personal count would be closer to 5,000: an assembly of rich and poor, old and young, traditional families and libertarian Bretons, but mostly “ordinary” folk from all political horizons – even the “Gilet jaunes” or yellow vest movement that rose in October 2018 in protest against the rise of the cost of energy and the growing poverty of the lower and middle classes.

The very diversity of the march should be food for thought for the government that has managed to arm an opposition where natural opposites march together with a single aim. And the mobilization of the “Gilets jaunes” is a sign that the movement has every chance of becoming a fixture with recurrent demonstrations. The only question now is whether the police forces will deal with them as violently and aggressively as they did with the original manifestations three years ago.

In a particularly aggressive move against those who want their bodily integrity and their freedom of movement and other fundamental liberties to be upheld, the government’s spokesman Gabriel Attal stated on BFMTV, a groveling pro-Macron news station:

There is a hard-working and proactive France, which wants to put the virus to one side and work. It is in the majority. And then there is a capricious and defeatist fringe, very much in the minority, which would be satisfied with remaining in chaos and inactivity.

Such a statement is a slap in the face of the 30 million French citizens who to date, are continuing to refuse the COVID “vaccine” and who are afraid for their health, their livelihoods, and the very future of society.

Among the slogans that flourished on Saturday in so many French towns, “Macron, step down!” was a major hit. Home-made placards talked about tyranny, the “Nazitary pass” and the defense of “our rights.” A placard in English read: “International community, please help us to stop Macron’s dictatorship.” Yet another said: “Bravo Macron, Xi Jinping would have done no better.” “Macron, you’re the virus.” “No apartheid,” said others.

Le Salon beige, a Catholic conservative news site, chose a picture showing a placard with the words: “‘My body, my choice. Does that only work for babies that aren’t wanted?” Many other images and videos showing a selection of rallies all over France are available here.

But of all the many, varied themes and catchphrases, the mainstream press focused massively on sparse occurrences of demonstrators wearing the yellow star imposed by the Nazis on Jews, “virtuously” decrying the use of the symbol by people who are being officially depicted as lazy, ignorant, and egoistic good-for-nothings.

Yes, many of the people who took to the streets are angry about the restrictions to their leisure activities, and rightly so, because they are part of life: meeting friends, gathering to enjoy a show or a meal together.

But this is not merely a question of being able to benefit from the simple pleasures of ordinary social life. For all health workers and employees in hospitals, homes for the elderly, in the tourism industry, transportation or major shopping centers having a sanitary pass will be compulsory, which amounts to mandatory vaccination. The probable reason French president Emmanuel Macron made the pass and not vaccination mandatory is that such a disposition would have been more difficult to impose in view of existing laws.

Conversations at the march I joined were not about being free to have fun: there were nurses and assistant care-givers who work hard all through the year and who are afraid that they will have to leave their jobs without compensation. Many spoke of fear for their children, others were explaining that they expect being forced to resign from their beloved profession at a time when COVID has pushed the employment market down. Families spoke of members who had accepted the COVID jab just to be free to go on vacation. Others explained how in the French army, enormous pressure has been put on soldiers and officers alike to accept the “vaccine”: some student officers are being forced to choose between resignation and getting the shots; others are being pushed into uninteresting, administrative jobs when they had hoped to join exterior operations.

In another recurring theme, demonstrators exchanged anecdotes about “adverse events” hitting the vaccinated shortly after getting the injection: blood clots, strokes, young women losing their periods and other, sometimes lethal occurrences were quoted as having happened to people directly known to them.

One such case involved the elderly father of a friend of my interlocutor, who recently died of thrombosis one week after being injected with the COVID jab: his death certificate mentioned the cause of death as the “consequence of a vaccinal injection.” But in the large majority of cases, no adverse effects are officially reported, and no autopsies take place.

A large section of the French public is clearly fully conscious of the astounding attack on freedoms and fundamental liberties that is being fast-tracked through the legislative system. Only hours ago, this Monday afternoon, the highest administrative court, the Conseil d’Etat, gave its green light to the sanitary pass law as drafted by the government, making only minor reservations such as the fact that COVID-positive individuals should not be controlled at night.

The Conseil d’Etat also decided that a 45,000 euro fine for shop or restaurant owners tasked with checking their clients’ compliance (that’s about 53,000 dollars), as suggested by the government, was too heavy, and revised it to 1,000 euro (and 9,000 in case of a repeat offense). But this is still a hefty fine for people whose livelihood depends on welcoming their clients; many joined the demonstrations all over France to protest on being used as auxiliary police forces.

On Tuesday, the National Assembly’s special commission will vet the draft law. One day later, the National Assembly will be asked to debate the text which should reach the Senate by Thursday. The government hopes that the procedure will be wrapped up by the end of the week, and that the sanitary pass” will come into effect by August 1.

On July 19, France had 4,151 new “cases” of COVID and twenty (20) deaths attributed to the disease. Meanwhile, in the U.K., some 50,000 new cases and 28 deaths were counted on Sunday. But in the U.K., yesterday was “Freedom Day” with the lifting of almost all restrictions, although vaccine passports will be rolled out for use in nightclubs starting in September.