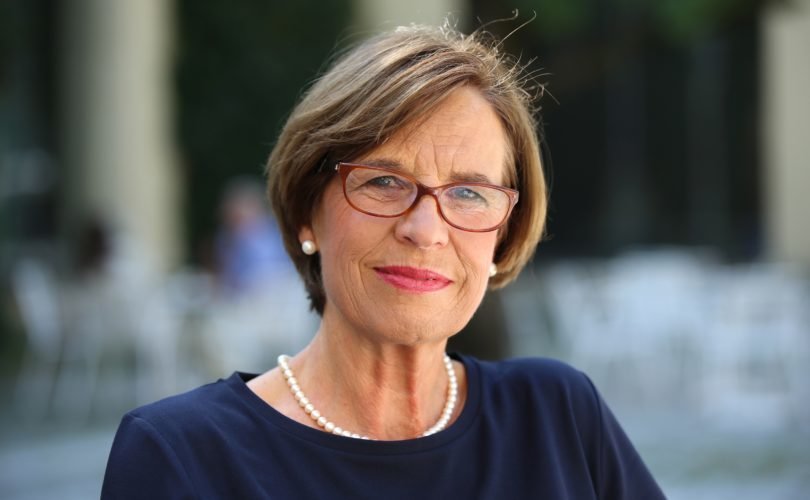 In his play, Falk Richter targeted five women who promote the natural family in Germany. They appear with their names and large photographs. For Richter, they are “zombies” risen from their graves, in which they were buried in 1945. Richter wants to get them under the earth anew, best done by “shooting them in the head.” One of these “zombies” is Gabriele Kuby.

FEAR has been performed since October 2015. The critiques were negative, even in left-wing papers. The aim of the play is to free Germany from a group of conservative opinion leaders. The introduction to the play portrays the five women as “zombies, returned from the past, who reiterate a vocabulary and rhetoric that throws us back into the times of national socialism …” In the play, these “zombies” are rendered objects of hatred and their death is seen as the only solution to “antiquated” beliefs. Actors poke out the eyes on their photographs. Counted among these zombies are also “Christian fundamentalist hate mongers, worried citizens,” and “parents who are afraid of alternative models of the family and the acceptance of sexual diversity.”

Kuby is reproached in the play as a “hate monger.” To make this point, the author manipulates quotations and puts words in her mouth that she never said in support of a totalitarian state. In reality, Kuby has incessantly warned of a new totalitarianism.

Kuby is moving forward with legal proceedings against Richter and the Schaubühne on charges of character assassination, violation of personal rights, manipulating quotations and symbolic violence. “Mobilizing against the ‘right wing’ in Germany counts as politically correct. If you want to ostracize someone, all you have to do is call him a right radical, or worse, a Nazi or anti-Semite — it works, even if it is pure slander as in my case,” Kuby said.

Kuby's lawyer, Steinhöfel, stated in a press release: “I cannot imagine that the courts will come to the conclusion that the symbolic mutilation of political enemies and the use of false and manipulated quotations is protected by 'freedom of the arts.’”

Kuby explained: “Falk Richter demonstrates with his play ‘Fear’ exactly the totalitarian spirit which I always warn of. I am carrying out this lawsuit because freedom of speech is at stake, a basic democratic right. Democracy thrives on free open discourse. This discourse cannot be sacrificed to political correctness. Whoever does not comply will be ostracized, bullied, and punished with public smear campaigns. We should not allow this.”

Kuby invited Falk Richter to a public discussion, but Richter, who complains that “zombies” shy away from open discussion, declined.

Gabriele Kuby's milestone work, The Global Sexual Revolution — Destruction of Freedom in the Name of Freedom — has been published in English by Angelico Press.