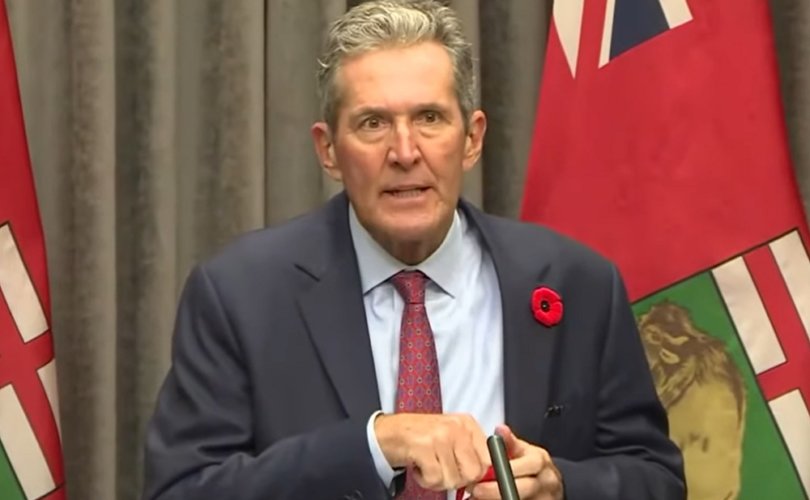 WINNIPEG, Manitoba, July 27, 2021 (LifeSiteNews) — Manitoba’s Premier said only those who have had two COVID-19 jabs will be allowed the “extra privileges” to access popular businesses such as cinemas and museums.

“Yes, people who get double vaccinated have additional advantages in this short-term period, we’re trying to do that, of course, to be safe and to encourage others to do the same,” the province’s Premier Brian Pallister recently told reporters at a news conference.

Under those new rules, only people who have been “fully vaccinated” will be allowed to go to professional sporting events, movie theaters, casinos, and galleries, which have all been closed since last fall.

Opening to everyone will be churches at 50 percent capacity or 150 people, whichever is lower, with masks required. Restaurants, libraries, days camps, and stores are also allowed to operate with higher capacity limits.

“One of the positive social realties of a society that is actually free, and therefore also equal, is that everyone is able to participate generally in public life by attending cultural events and facilities,” said Kitchen. He added that the new rules are akin to the “hallmarks” of an “authoritarian or dystopian society” in the “segregation of a class of people because of their status, be it immutable characteristics such as race or gender, or fundamental personal choices such as religious belief or health choices.”

Pallister claimed that those who are not vaccinated will still benefit “as well,” saying “special circumstances around being able to go to a movie or a Bomber game if you’re double vaccinated are extra privileges.”

Roussin claimed that the current rules are only for the interim, but would not say when all restrictions will be lifted.

It is not clear from the government press release how businesses will determine one’s COVID-19 jab status. One possibility could be to use the province’s recently launched form of vaccine proof, which one can attain in digital form.

Kitchen told LifeSiteNews that if Manitoba’s government does not provide exceptions to what he calls a “vaccine passport” on grounds of “religion, mental disability, and physical disability,” it will most likely contravene human rights legislation and equality protections guaranteed by section 15 of Canada’s Charter of rights and freedoms, “and freedom of conscience and religion as protected by section 2(a) of the Charter.”

“Even without exemptions, such a policy infringes the rights to liberty and privacy under sections 7 and 8 of the Charter because it ‘outs’ and penalizes people for deeply personal health choices,” said Kitchen.

As of July 6, 75 percent of Manitobans have had a first dose of the COVID-19 jab, and half the population are fully vaccinated.