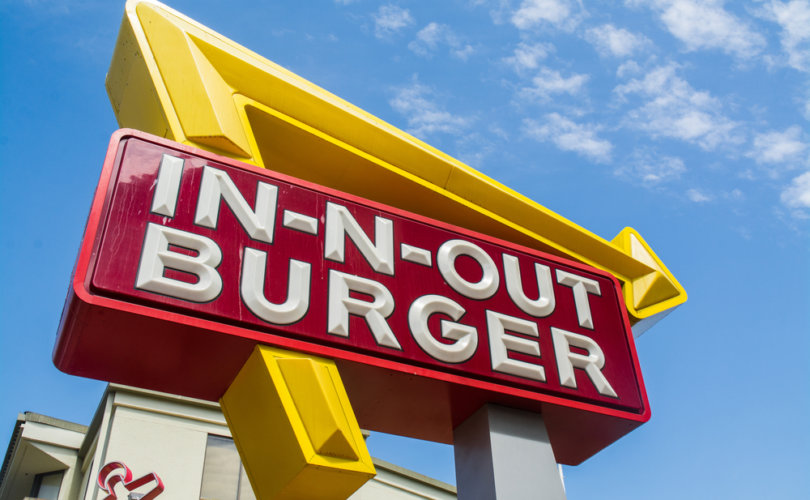 (LifeSiteNews) — Holding firm in its refusal to “become the vaccination police,” popular California-based burger joint In-N-Out has opted to offer drive-thru and take-out service only for all its restaurants in one Bay Area county rather than force employees to check patrons’ COVID-19 vaccination status.

Last month Contra Costa county, located in the east Bay Area of California near San Francisco, adopted a COVID-19 vaccine mandate demanding certain public venues — including restaurants — to require patrons to show proof of “full” vaccination or a negative test result along with a photo ID to gain entry.

Instead of bowing to pressure to enforce the COVID-19 vaccine passport rule in, In-N-Out Burger, which was founded in 1948 as a small hamburger stand in Baldwin Park and maintains its mid-century muscle car motif, opted to stay true to its roots and its values by keeping its drive-thru open and shutting down indoor dining for its five Contra Costa locations rather than enforce the local vaccine passport rule.

The move came after county health officials closed down In-N-Out’s Pleasant Hill location and fined three other In-N-Outs in the area, leading protesters to rally outside two of the Contra Costa locations to support the burger joint’s stand against the discriminatory regulations.

Protesters rally in support of In-N-Out after CA location closed due to health order violation https://t.co/3BwL30PxWi

“The reason for the closure is that In-N-Out Associates were not actively intervening by demanding COVID-19 vaccine or testing documentation and photo identification from each dine-in Customer before serving them,” In-N-Out Chief Legal and Business Officer Arnie Wensinger said in a statement after health officials ordered their Pleasant Hill location to permanently close down, according to The Hill.

“Rather than acting as enforcement agents, our Associates were allowing our Customers to be responsible for their own compliance with the divisive local regulations,” Wensinger said.

The Hill reported that the Pleasant Hill location had been hit with numerous warnings “before they were ultimately told to close indefinitely for violating the mandate.”

“The Pleasant Hill In-N-Out location received four citations in recent weeks and fines totaling $1,750, all for the same health order violation, before today’s action,” Contra Costa Environmental Health said in a statement, according to the outlet.

Though public health officials had ordered the Pleasant Hill location to shut down for running afoul of the county’s vaccine passport mandate, the restaurant re-opened its drive-thru only a day later on Wednesday night.

News of In-N-Out’s decision to preemptively close indoor dining at its Contra Costa locations came after the company’s San Francisco location was briefly closed down earlier this month.

The penalty came after health officials allegedly gave the restaurant repeated warnings, advising its management that employees would need to check patrons’ COVID-19 vaccination status in order to stay open.

In a statement, Wensinger said, “We fiercely disagree with any government dictate that forces a private company to discriminate against customers who choose to patronize their business.”

Calling out the city for asking restaurants like In-N-Out to “segregate Customers” based on their vaccination status, Wensinger added, “We refuse to become the vaccination police for any government,” describing the mandate as “clear governmental overreach” which “is intrusive, improper, and offensive.”

As with the Contra Costa locations, the San Francisco restaurant reopened its drive-thru and take-out options shortly after its scuffle with the public health authorities, but has kept its indoor dining closed.

Ever since In-N-Out made its stand against the California vaccine passport regulations, the already popular restaurant has drawn attention from private citizens and public figures alike, who have expressed their appreciation for the business’s willingness to stand up for the rights of both its employees and its customers.

Florida Gov. Ron DeSantis’ spokeswoman Christina Pushaw put out a call for In-N-Out, a California-based family-owned restaurant with locations in Arizona, Nevada, Texas, Utah, Oregon, and Colorado, to open up locations in Florida as well.

In-N-Out, which late last year announced it was opening at least one location in Idaho, has not yet responded to the offer to open locations in the Sunshine State.

It is unclear whether In-N-Out will seek legal action if it continues to face pressure and penalties from health officials for refusing to comply with the “clear government overreach” of vaccine passport requirements in California.

Known for its soda-cup Bible verses and charitable foundation to help child abuse victims, In-N-Out is currently run by CEO Lynsi Snider, a vocal Christian and granddaughter of the company’s original founders.

Snyder, 39, who struggled with serious personal tragedy and addiction before dedicating her life to Christ, has spoken publicly about wanting to encourage other Christians to live their faith authentically.

Speaking about the “battle over souls,” Snyder told the Christian Post in a 2019 interview, “We want to be on the front lines of this battle to save the lost and bring fallen Christians back to their first love.”