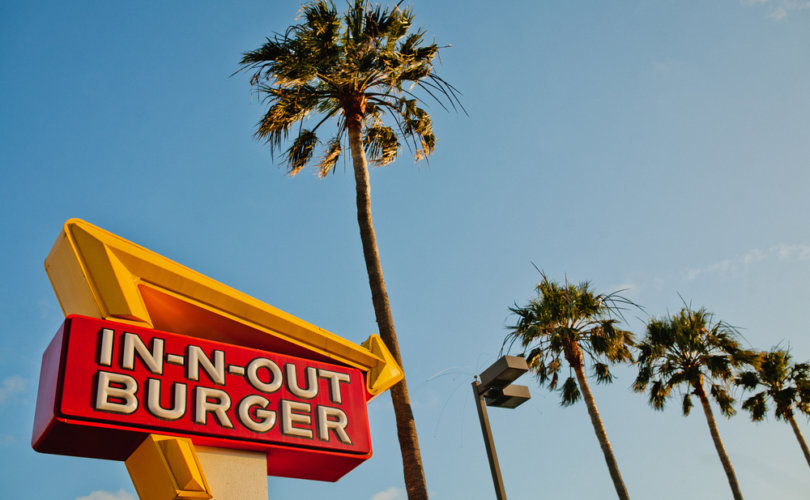 SAN FRANCISCO (LifeSiteNews) — California’s beloved drive-thru restaurant In-N-Out Burger, known for its simple menu, soda cup Bible verses, and a throwback vibe reminiscent of 1950s Americana, has joined the ranks of the many businesses and individuals pushing back against draconian COVID-19 jab mandates.

“We fiercely disagree with any government dictate that forces a private company to discriminate against customers who choose to patronize their business,” In-N-Out Burger’s Chief Legal and Business Officer Arnie Wensinger said in a statement to Fox News, calling out the city for asking restaurants like In-N-Out to “segregate Customers” based on their vaccination status.

“We refuse to become the vaccination police for any government,” Wensinger said. “This is clear governmental overreach and is intrusive, improper, and offensive.”

“We refuse to become the vaccination police for any government,” a spokesperson for the fast-food chain said. https://t.co/fuZtAuV9mM

The burger chain, which is also well-known for its charitable foundation to help child abuse victims, went public after the city of San Francisco temporarily shut down the historic California city’s only In-N-Out restaurant, located in San Francisco’s famous tourist stop Fisherman’s Wharf.

The move came after the city’s department of public health issued multiple warnings to the restaurant to impel its managers to enforce the city’s authoritarian vaccine passport scheme.

However, in violation of San Francisco’s vaccine passport scheme, one of the strictest in the nation, no In-N-Out employees were checking vaccination status as a condition of entry.

According to the San Francisco Chronicle, the city’s Department of Public Health “asked In-N-Out to correct the violations multiple times since late September, after a complaint was filed with the city’s 311 service center line,” but In-N-Out refused to budge.

“After an initial visit on Sept. 24, health inspectors returned on Oct. 6 and found that the In-N-Out was still not enforcing the vaccine mandate. The Public Health Department said it ‘attempted multiple times to bring the business into compliance with the health order’ before shutting In-N-Out down Thursday, Oct. 14,” the Chronicle reported.

“The business was instructed to cease all operations on site immediately because of the threat it poses to public health,” the Department of Public Health said in a statement.

Wensinger said after the city moved to shut down the restaurant, “local regulators informed us that our restaurant Associates must actively intervene by demanding proof of vaccination and photo identification from every Customer, then act as enforcement personnel by barring entry for any Customers without the proper documentation.”

According to Wensinger, requiring businesses to act as the enforcement arm for the city’s discriminatory policy is “unreasonable, invasive, and unsafe.”

Per San Francisco’s COVID-19 vaccine passport requirement, however, customers are not permitted to dine indoors.

In-N-Out’s response to being shut down by San Francisco:

“We refuse to become the vaccination police for any government. We fiercely disagree with any government dictate that forces a private company to discriminate against customers who choose to patronize their business.”

Kiley was joined by many other social media users who praised the fast food joint for its stand against coercive COVID-19 injection mandates.

“[I]f you live near an In-N-Out Burger it is your patriotic duty to spend some $$$ there tomorrow,” put in Fox News current affairs show host Steve Hilton.

Florida Gov. Ron DeSantis’ spokeswoman Christina Pushaw shared a link to the In-N-Out story, putting out a call for the California-based chain to open up locations in Florida, where businesses are explicitly banned from asking for proof of vaccination.

Founded in 1948, In-N-Out is currently run by 37-year-old CEO Lynsi Snyder, whose grandparents Harry and Esther Snyder founded the chain more than 70 years ago.

Snyder said Harry and Esther “set the bar high and I only try to raise it.”

Though it began in California as a Golden State phenomenon, In-N-Out now boasts locations in Nevada, Arizona, Utah, Texas, and Oregon.

Amid the restaurant’s growth and success, the In-N-Out CEO told the Christian Post she just seeks to “maintain what we’ve started with: Not compromising the quality of product, service, or standards.”

Snyder has also kept In-N-Out’s Christian culture alive by continuing a practice of including Bible verses on In-N-Out’s packaging, a tradition she said was started by her uncle Richard Snyder in the 1990s.

“It was my uncle Rich who put the Bible verses on the cups and wrappers in the early ‘90s, just before he passed away,” Snyder said.

“He had just accepted the Lord and wanted to put that little touch of his faith on our brand. It’s a family business and will always be, and that’s a family touch. In later years, I added verses to the fry boat, coffee, and hot cocoa cups,” she added.