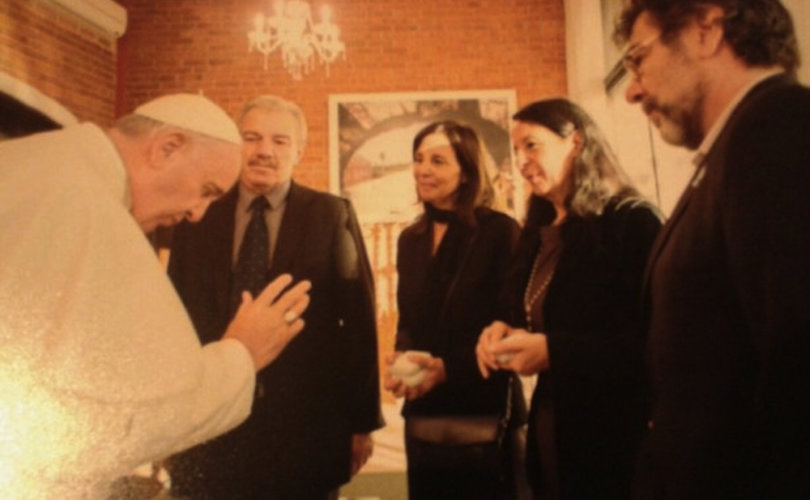 VATICAN CITY, September 1, 2017 (LifeSiteNews) — In a newly published book-length interview, Pope Francis reveals that a Communist woman had a marked impact on his political thinking. “She taught me to think about political reality,” says Pope Francis of Esther Ballestrino De Careaga. “I owe so much to this woman.”

Francis brought up Bellastrino when author Dominique Wolton asked him about women who were a major influence in his life. “She was communist,” Francis readily admits, adding “she gave me books, all Communist.”

Exclusive excerpts from the interview were published in Le Figaro Magazine this morning. Politics and society: Pope Francis speaks with Dominique Wolton will be released in French on September 6.

George Neumayr, author of an in-depth look at Pope Francis called The Political Pope, notes that Ballestrino was the young Jorge Bergoglio’s boss at the laboratory where he worked. “She introduced him to communist periodicals and literature,” Neumayr told LifeSite in an interview. “When she got into trouble with the authorities, he hid her Marxist tracts in a Jesuit library.” “The reporter John Allen says that when her family asked for her to be buried in a Catholic cemetery, Bergoglio ‘readily consented’ even though he knew she wasn't a believing Catholic.”

While some Catholics might view Neumayr’s work as irreverent, the author’s highly referenced work unveils a grim picture of a Pope heavily influenced by communism. Asked to describe the Pope’s attitude towards communism, Neumayr said, “He tends to speak of communism in benign terms … He told the Italian press that he wasn't ‘offended’ if people call him a communist since he has ‘met many Marxists in my life who are good people.’”

Neumayr points to Pope Francis’ communist influence in politics both outside and inside the Church. “As I describe in the book, he rolled out the red carpet for Raul Castro, which flabbergasted Cubans who have suffered under the heel of his communist thuggery,” he said.

Inside the Church, Neumayr notes that Pope Francis has embraced Liberation theologians who were banned by his predecessors. “Liberation theology, which is an attempt to incorporate socialism into Catholic theology, was marginalized under Pope John Paul II and Pope Benedict XVI,” he said.