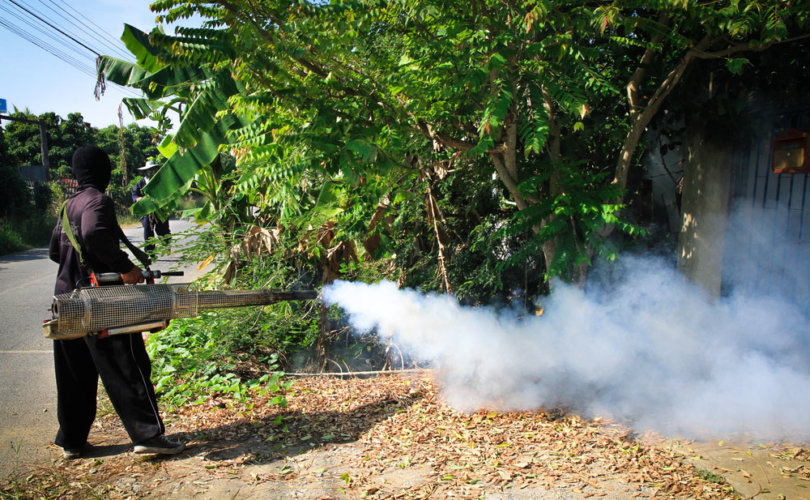 WASHINGTON, D.C., April 14, 2016 (LifeSiteNews)—As the Centers for Disease Control (CDC) said Wednesday that the Zika virus can cause microcephaly and other birth defects, pro-life leaders expressed concern that the assessment will be used to promote abortion.

A report published in the New England Journal of Medicine concluded, “a causal relationship exists between prenatal Zika virus infection and microcephaly and other serious brain anomalies.”  The study examined, among other factors, “Zika virus infection at times during prenatal development that were consistent with the defects observed” and the identification of Zika virus in brain tissue of affected unborn children and infants.

“This study marks a turning point in the Zika outbreak.  It is now clear that the virus causes microcephaly,” said Dr. Tom Frieden, director of the CDC.

The Zika virus is spread primarily through infected mosquitoes.  Microcephaly is a birth defect that causes babies to be born with severely undersized heads and neurological problems.

Abortion advocates have used the Zika outbreak to push Latin American countries to loosen abortion restrictions.  UN human rights chief Zeid Ra’ad al-Hussein said that abortion and contraception laws in affected areas—many of which are predominantly Catholic—should be reviewed “in line with human rights obligations to ensure the right to health for all in practice.”

“Upholding human rights is essential to an effective public health response and this requires that governments ensure women, men and adolescents have access to comprehensive and affordable quality sexual and reproductive health services and information, without discrimination,” Zeid said.  According to a news release from Zeid’s office, “comprehensive sexual and reproductive health services include contraception…and safe abortion services to the full extent of the law.”

“Naturally the Zika virus is a cause for concern, and we call upon governments and medical professionals to continue to develop appropriate treatments and interventions.  But in no way does this justify recourse to abortion,” said Father Frank Pavone, National Director of Priests for Life.  “The child in the womb is a patient too, and killing one's patient is never an appropriate response.”

Gwen Hartley, who has two daughters with microcephaly, recently told the Washington Post, “I know the joy that can come from having these kids. I wouldn’t purposely want another child to be affected, but I’m happy that they’ll know what I know [about having a child with microcephaly]. I would not have chosen it prior to my girls, but I didn’t know what I was missing out on.”

“Pregnancy always entails some risks; the presence of the Zika virus adds incrementally to those risks,” Catholic writer Phil Lawler wrote on his website CatholicCulture.org. “But for a woman who is not already infected, the additional risk is not overwhelming—not so great that it should bar any chance of having children. A better solution, from a public-health perspective, would be to help women of child-bearing age avoid Zika infection. For that matter, the top priority should always have been to help everyone avoid that risk.”

Pope Francis made confusing, controversial remarks in February about whether the use of artificial contraception would be morally permissible to prevent pregnancy due to Zika.

“Zika is the most recent and high-profile instance of any number of diseases that might have deleterious effects on the unborn children whose mothers contract it while pregnant,” the National Catholic Bioethics Center (NCBC) wrote in February. “In no way, however, would it justify a change in the Catholic Church’s consistent teachings on the sacredness and inviolability of human life and the dignity and beauty of the means of transmitting life through marital relations.  Direct abortion and contraceptive acts are intrinsically immoral and contrary to these great goods, and no circumstances can justify either.”

The NCBC explained, “governments and public health experts may be justified in recommending that married couples delay childbearing temporarily in view of the great number of apparent risks associated with contracting Zika during pregnancy. Married couples should prayerfully assess any such recommendations.”

Hartley said she doesn’t look at her daughters “as having terrible birth defects. I look at them as gorgeous. To me that is not a horrible, hideous birth defect. It’s no less beautiful to me.”

Vatican affirms Pope was speaking about contraceptives for Zika

Pope Francis compares Zika abortion-pushers to the Mafia: abortion is ‘a crime, an absolute evil’

Zika and abortion, a tale of two viruses