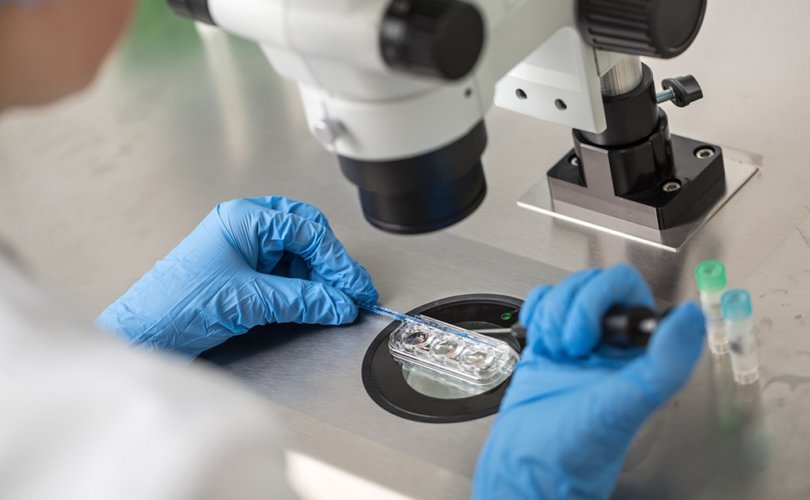 PARIS, January 21, 2020 (LifeSiteNews) — Shortly before the French Senate was scheduled to contemplate a bill to permit in vitro fertilization for single women, including lesbians, more than 40,000 people demonstrated against the measure on the streets of Paris on Sunday.

Led by the populist La Manif pour Tous movement, tens of thousands of demonstrators protested against legislation that will allow women in same-sex couples to resort to “artificial conception” — that is, taking sperm from a random or pre-selected father, whom the conceived child will likely never know, so the child can be raised by his mother, alone or with another female — and allow the mother and the other woman to be listed as parents on the birth certificate of the resulting children. Pro-family activists of La Manif have disputed official estimates for the number of participants in the massive demonstration, saying there were far more. The leader of La Manif, Ludovine de La Rochère, said she was happy with the turnout, which came about despite the cold and a prolonged and crippling transport strike.

In October, the lower-house National Assembly passed a draft bill with amendments for review by the Senate, sparking public protests in opposition in the fall. Protesters on Sunday objected especially to extending legal access to artificial procreation, such as in vitro fertilization (IVF), to single women.

President Emmanuel Macron expressed support for the concept while running for office in 2017. The Senate began debate on Tuesday and will continue to review the reform bill through February 4, at which time the measure will return to the National Assembly.

Macron and the French minister of health and solidarity submitted the bioethics bill in July to the National Assembly. Currently, France’s Public Health Code allows artificial reproduction only to couples, in consultation with medical experts, that consist of a “man and a woman” who are either experiencing fertility problems or wish to avoid transmitting a serious illness to their child. Macron’s La République en Marche! (LREM) party wants to see the reform pass, but without the public backlash that came upon the legalization of same-sex “marriage” in 2013.

While the amended bill includes access to artificial reproduction “sans père” (using sperm from an uninvolved male — French literal translation, “without a father”) for single women, it remains to be seen whether the procedure will be covered by the French social security system. Senator Muriel Jourda of the party Les Républicains has proposed that only heterosexual couples should be covered for artificial reproduction but only when specific medical criteria are met, such as diagnosed infertility or in order to prevent transmission of a serious illness or condition to the child.

Under Jourda’s proposal, single women, including lesbians in a couple with another woman, would have to pay the full price for the procedure, which in France is available only in publicly funded facilities. However, France’s minister of health, Agnès Buzyn, wants to see total coverage for artificial procreation for all.

Despite opposition by pro-family legislators and activist groups, language in the bill establishing the identity of the mother and a biologically unrelated second woman on birth certificates remained unamended during committee debate in the National Assembly. Last year, the lower house agreed that both a mother and her same-sex paramour would have to officially recognize a child born to the former in an act before a notary public. Therefore, the non-mother in the pair would be recognized as one of the two parents and on equal footing with the mother. Birth certificates could therefore claim to list two “mothers.”

Storing frozen embryonic babies who are conceived by artificial procreation, when women are subjected to dangerous mega-doses of hormones and injected with sperm, is currently permitted in public facilities only. Leftist advocates of the process contend that the public facilities are storing frozen human beings beyond their capacity, leading to delays. Therefore, they successfully passed an amendment in committee in the lower house to allow for-profit private facilities to store embryonic babies, which would ostensibly be able to absorb a growing number of women seeking artificially conceived children.

Another amendment raised the period for cultivating an embryo from seven days to 14. Storage of embryonic babies would be increased from five to 10 years.

When a woman subjects herself to IVF hormone treatment, superovulation in the woman’s body releases perhaps dozens of eggs (oocytes), which are then frozen. They can be fertilized with sperm, and the resulting embryonic babies are frozen for later implantation in other women, scientific research, or destruction. Unfertilized eggs and sperm can also be frozen for later use.

In advance of the National Assembly vote in September, the French National Academy of Medicine issued an official opinion that expressed “a number of reservations” about the proposed revision of bioethics laws. While the Academy recognized the “equal rights of all women regarding procreation,” it also recognized “the right of every child to have a father and a mother as far as possible.”

Asserting that the proposed reform would mean a “voluntary breach of equality between children,” the body declared: “As such, the deliberate conception of a child deprived of a father constitutes a major anthropological rupture which is not without risks for psychological development and the development of the child.”

A child is a gift, not a commodity

The Catholic Bishops’ Conference of France has condemned the bill and called on Christians to sign a petition and march in protest. Archbishop Michel Aupetit of Paris released a statement, saying: “You would think the senators had some form of wisdom and that we could count on a certain reserve on their part.” He went on to say, “One has the impression that there is a total loss of consciousness. We are totally drifting!”

Archbishop Aupetit is a medical doctor who once practiced medicine and taught bioethics in a medical school.

He asked, “After starting to destroy the planet, are we going to let our humanity be disfigured? Who will dare to raise their voices?” Alluding to the internationalization of the IVF business, and the possibility of human-animal hybrids (chimeras), he said, “For years, we have been committing ourselves ever further towards a mercantile drift of wealthy countries which buy themselves the luxury of organizing eugenic trafficking, with the systematic elimination of the most fragile, the creation of transgenic embryos and chimeras.” He asked how society can be so concerned for the natural environment yet show comparatively little concern for humanity.

“A child is a gift to be received, not an order to be manufactured. The absence of a father is an injury that can be suffered, but it is monstrous to inflict it on purpose,” said Archbishop Aupetit. He added, “As the Permanent Council of the Conference of Bishops of France has just recalled, the right to conscientious objection in these areas must be guaranteed in the name of freedom. There is still time for the legislature to pull itself together, to dare to go beyond ideological postures and for all citizens to make the voice of common sense, conscience and human brotherhood heard.”