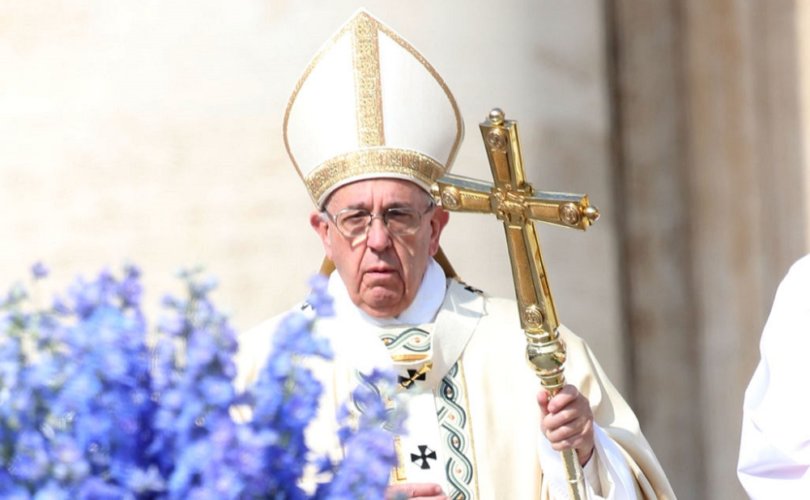 VATICAN CITY, July 31, 2020 (LifeSiteNews) ― Pope Francis has contributed a preface to a book of personal reflections by Cardinal Walter Kasper, among others, about the COVID-19 pandemic.

The book, published in Italy by Libreria Editrice Vaticana, is entitled Communion and Hope: Witnessing Faith in the Times of Coronavirus in Italy. For the Spanish-speaking market, it is called “God in the Pandemic.” A collection of essays, the volume was edited by Cardinal Kasper, 87, and the Indo-German founder of the Walter Kasper Institute, Fr. George Augustin, 64.

Cardinal Walter Kasper is one of the cardinals believed to have backed the election of Jorge Bergoglio as pope in 2005 and then, successfully, in 2013.  The German theologian, a former bishop of Rottenburg-Stuttgart, is known for his early advocacy of the admission of  divorced and “remarried” Catholics to Holy Communion. He has more recently suggested that homosexual relationships are “analogous” to marriage.

Kasper is believed to exert a strong theological influence on Pope Francis. However, his strong opinions have led him into occasional embarrassments, such as his dismissal of the traditional views of the African bishops in 2014, and his declaration in 2010 that someone landing at London’s Heathrow airport might think they were in a “Third World country.”

Contributors to the new book include Archbishop Bruno Forte, the pro-LGBT theologian who introduced the issue of homosexuality at the Synod for the Family.

According to the Holy See’s own Vatican News, Pope Francis likened the coronavirus pandemic to a sudden “storm.”

“Like a sudden breaking storm, the coronavirus crisis has caught us all by surprise, abruptly changing on a global level our personal, public, family and working lives,” the pontiff wrote.

Francis noted that people had lost loved ones, jobs and financial stability. He reflected also that Christians were unable to celebrate Easter in church and that many had not had recourse to the sacraments.

“This dramatic situation highlights the vulnerable nature of our human condition, limited as it is by time and contingency,” he wrote.

The pontiff saw a bright side to the pandemic in that it has helped people to contemplate what is truly important in life.

“It reminds us that we have forgotten or simply delayed attending to some of the key issues in life,” he wrote.

“It is making us evaluate what is really important and necessary, and what is of secondary or only superficial importance.”

This “time of trial” is reorienting us toward God, Francis said. He also reflected that it has made us aware of our dependence on others and our call to serve others and our “gravely diseased planet.”

Previously Pope Francis has astonished Catholics by blaming the Covid 19 novel coronavirus, which originated in Wuhan, China, on human mistreatment of the environment. In March, the Argentinian pontiff told a Spanish journalist that he believes the pandemic is nature “having a fit” in response to pollution.

During his dramatic Ubi et Orbi service on April 1, Pope Francis again connected the virus to environmental decline. He prayed aloud to God, “We did not stop at your reproach to us, we were not shaken awake by wars or injustice across the world, nor did we listen to the cry of the poor or of our ailing planet. We carried on regardless, thinking we would stay healthy in a world that was sick.”

Vatican News reported that this year’s Easter, which most Catholics and other Christians spent at home, locked out of churches, led Pope Francis to reflect that the “Easter message of Christ’s victory over death … showed Christians that we cannot remain paralyzed in the face of the pandemic.”

“Easter brings us hope, trust and encouragement,” he wrote.

“It strengthens our sense of solidarity. It speaks to us of overcoming past rivalries so that we may see each other, above and beyond any differences, as members of one large family, where we bear each others’ burdens.”

Francis then compared the contagion of the disease to the “contagion of love” and expressed gratitude for the good deeds of medical professionals and priests during the pandemic.

Pope Francis asserted that public Masses were not “possible” during the beginning of the pandemic.”

“The first phase of the corona virus, in which public celebrations of the Eucharist were not possible, represented for many Christians a time of a sorrowful Eucharistic fast.” Pope Francis also acknowledged that livestreamed Masses were “no substitute for the living presence of the Lord in the celebration of the Eucharist” and expressed his satisfaction that in many places, Catholics have been allowed to return to Mass in person.

“The presence of the Risen Lord in His Word and through the celebration of the Eucharist will give us the strength we need to resolve the difficulties and challenges that we will face after the coronavirus crisis,” he wrote.

Aug. 5, 2020 update: This report now includes additional information about Cardinal Kasper and the Pope’s previous statements about the pandemic.