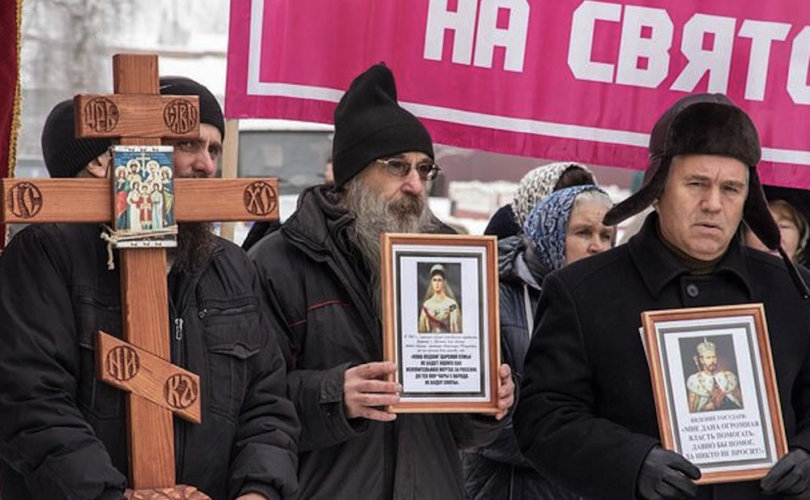 BOGOLYUBOVO, Russia, December 8, 2016 (LifeSiteNews) – The villagers of Bogolyubovo, a name which means “Lovers of God,” are taking a stand against a proposed condom factory — even though they need jobs.

On December 4, 120 Orthodox Christians protested outside village offices demanding that officials halt the conversion of an abandoned brick factory into a condom manufacturing plant. The population of Bogolyubovo is 4,500.

Demonstrators prayed, holding icons, a large cross, and signs that said, “No condom manufacturing on a holy site!” and “Mother of God, save us from desecration!”

Protesters are especially offended at the location of the factory, near a monastery and a school. Supportive local officials say the factory will create 200 jobs and will replace imported goods with domestic product.

“I thought they would support the creation of jobs and tax revenue for the village,” Pavel Spichakov, the managing director of the conglomerate that includes Bergus, said.

“There used to be a brick factory here. It closed. People ended up without work,” Kirill Vasilyev, a local reporter covering the dispute, said.

In November, a petition was submitted to stop construction of the plant, which will also make diapers and adhesive bandages. Bergus, the company that owns the proposed factory, agreed to meet with concerned citizens.

“Purity is the instrument against ugly diseases,” one factory opponent said at the meeting.  “From Bogolyubovo, we should spread purity and holiness!”

“What is surprising is not the protest of believers but the fact that the owner of the enterprise and local authorities entered into talks with them,” Spichakov added.

Vasilyev reported that the Christians intend to collect enough signatures from villagers to stop the factory.

The Russian Orthodox Church is maintaining neutrality in the dispute. Orthodox Christianity is not against the use of condoms for married spouses to space the births of children, but only sparingly and unselfishly. The world’s second largest body of Christians teaches that “the deliberate refusal to have children because of selfish urges devalues marriage and is undoubtedly a sin.”