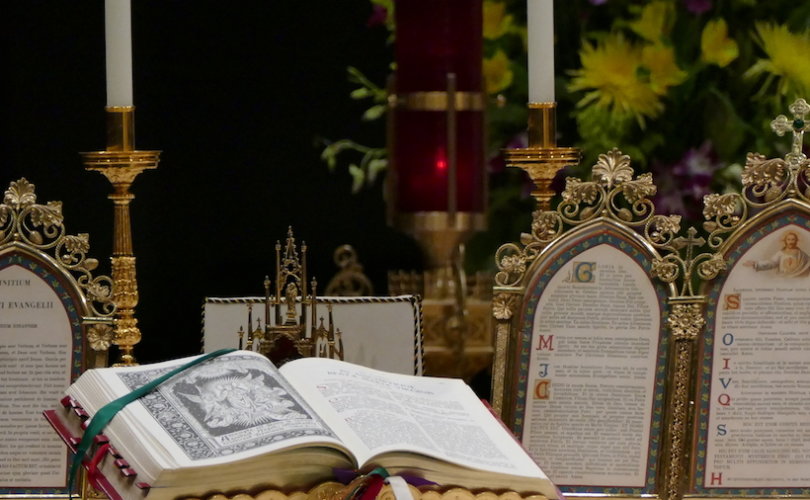 December 24, 2016 (LifeSiteNews) – One night each week, I forget about work and all the stresses of modern life during a quiet, humble Low Mass in the Extraordinary Form of the Roman Rite.

This is the ancient rite of the Mass that was used before Vatican II. Today, it’s considered by the Church to enjoy equal dignity with the Ordinary Form of the Mass (“English Mass” or Mass that uses exclusively or mostly the vernacular, with different rubrics and prayers). I’m blessed to attend a parish that offers Mass in both forms, with holy priests who love Jesus and are devoted to glorifying Him and Him alone in the liturgy.

There’s rarely a homily at this Mass. Many of the priest’s prayers are barely audible. The congregation silently reads the prayers as the priest whispers them. There are a lot of people under 30 and over 60. There’s definitely a crowd of “regulars.” There are usually just two altar boys.

It’s during the quietest moments during these most quiet of Masses, when everyone’s eyes are transfixed on the crucifix with the priest, that I can best focus on God. There are no distractions. It’s not about the priest. It’s not about what other people are doing or wearing. It’s about the word becoming flesh right before our eyes — the priest turning mere bread and wine into the literal body, blood, soul, and divinity of Jesus the same way the Holy Spirit allowed the Virgin Mary to conceive a son.

During these quiet moments, it’s most apparent how unworthy we are of any of it: a God who allowed himself to be a human (while still remaining fully God) in order to sacrifice Himself for us, a God who forgives even the most disgusting and evil of sins, a God who established an institution on Earth against which the gates of hell will not prevail.

It’s during these quiet moments that God has given me the grace to make peace with heartbreak, anger, frustration, shame, and the other emotions and states into which our fallen human condition allow us to go. He has used these quiet, mystical moments to heal deep wounds and speak to me in an intimate, loving way.

And it’s during these quiet moments that the Catholic Church’s internal problems, our culture’s embrace of militant secularism, and the widespread confusion about what it means to be man or woman or even human don’t have any power.

The image of baby Jesus in a manger became significant to me when, a few years ago, a friend pointed out that the Three Wise Men were visiting Jesus the same way we do at Eucharistic Adoration or Mass. And, she said, the fact that Jesus was laid in a manger — the animals’ trough — was foreshadowing of the fact that He would give us His literal flesh and blood to eat.

This tiny white host is so powerful it gives the most broken, most unworthy, least likely people the strength to fight in the culture war and sometimes even make a dent of positive change.

I pray that Jesus in the Eucharist will heal every one of your pains and disappointments this Christmas. Just as the Three Kings were able to adore Our Lord as the Savior of the World, I hope that you too are able to kneel before Him and experience the deep peace that only a tiny infant in a manger or flat host in a priest’s fingers can bring.