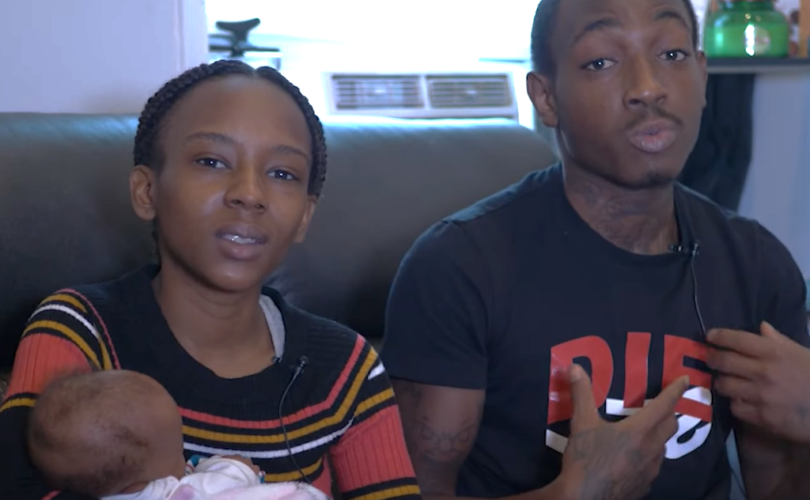 PHILADELPHIA (LifeSiteNews) — In a display of awe, gratitude and affection, a West Philadelphia couple shared the profound impact pro-life councilor Mark Houck has had on their lives due to his last-minute intervention on the sidewalk just as they were entering Planned Parenthood to undergo an abortion last year.

Houck and his family were the victims of a terrorizing FBI raid on their home September 23, a report that LifeSiteNews broke at the time and has since gone viral as a national news story.

Interviewed in a four-minute video produced by the Pro-Life Union of Greater Philadelphia, the young couple identified as Jadda and Markeem joyfully held infant daughter Nevaeh as they described how their lives would have been drastically impacted for the worse had Houck not reached out to them that day on the sidewalk.

“I had one hand on the door about to go into Planned Parenthood, and then Mark stopped us,” Jadda recounted, “and he was like, ‘You guys don’t have to do this.’”

“We talked to him, and he really got through to us like literally before we walked into the doors,” Markeem added.

Jadda explained how she felt such “shame and guilt,” sadness, confusion, and disgust with herself when she discovered she was pregnant, and how Houck made all the difference with his approach to the couple.

“He was just really trying to get to know us on a deeper level” rather than only focusing on whether or not they went through with the abortion, she explained. “And that’s another reason why we was like real easy and quick to open up to him, because it wasn’t like a judgment thing at all. He was really like digging deep.”

Markeem explained how Mark gave them great confidence in their ability to give birth to their daughter and the support that he and the pro-life community in Philadelphia could provide them.

“I really feel like if we would have went through with it [the abortion], I would have been living with regret,” Jadda reflected.

“The pro-lifers definitely were there for us every step of the way,” Markeem said.

Jadda added, “Even though we had our family, they [the pro-lifers] was like our first support system that we had. So that’s heavy. That’s deep.”

“There’s times I can’t think of her [baby Nevaeh] without thinking about y’all,” Markeem said. “So that should just explain it right there. I’m happy, but like I said, I’m just like complete, I’m so overwhelmed.”

“And you guys who were pro-life, were the first people to actually, you know, reach out and actually be our support system to actually show us the way,” Jadda said. “And it actually worked out. I can’t imagine it any other way.”

“So, thank you to all the supporters of the Pro-Life Union. Thank you so, so, so much. We don’t even know where we would be without you guys,” she added. “From day one you’ve been there beyond the support system. You guys are definitely like family. So, thank you.”

The video ends with a written acknowledgement stating, “Special thanks to Mark Houck for being there on a cold winter day to say ‘we will help you.’”

Pro-Life Union CEO: Mark Houck is ‘the real thing,’ ‘he cares and he personally offers help’ to women and couples experiencing crisis pregnancies

Tom Stevens, who serves as president and CEO of the Pro-Life Union (PLU), told LifeSiteNews that Mark Houck “is such a great guy: kind, generous, and thoughtful.”

He is also “gentle but assertive,” which Stevens believes contributes to his effectiveness with young women and men when they are facing a crisis pregnancy.

And since that encounter on the sidewalk, he reports Mark and his wife Ryan-Marie have built a friendship with Jadda and Markeem supporting them every way they can.

“It’s the real thing,” Stevens explained. “It’s not just saying, ‘we care and we can offer help,’ but he cares and he personally offers help and his wife does as well.”

This includes the hosting of a baby shower for Jadda while she was expecting and even having the couple with baby Nevaeh to their home earlier this year.

Stevens explains that the Pro-Life Union “hosts baby showers pretty regularly for women who have changed their mind and have become part of our network,” which includes “the pro-life community in general in Philadelphia.”

The Pro-Life Union consists of “25 member organizations” with “six pregnancy care centers and about five maternity homes” along with many other service organizations, including Houck’s The King’s Men apostolate, Stevens said.

And further, Houck’s relationship with this young couple is not an isolated circumstance, according to the PLU CEO, who does a generous amount of sidewalk counseling himself. “Mark is in relationship with a lot of people over the years that he’s come to know because he’s been outside praying, witnessing and reaching out in front of abortion centers.”

In a September 26 interview with LifeSiteNews, Houck family spokesman Brian Middleton said that though he “had to drag it out of him,” Mark estimated that “in the last two years he has prevented 20 babies from being killed in abortion clinics and probably more than 100 over the last 18 years.”

Stevens also explained that like 96 documented cases of terrorist violence and vandalism committed against churches, and pro-life centers this year, the Pro-Life Union was also vandalized twice with the second occasion being caught on surveillance video.

Though Merrick Garland’s Department of Justice (DOJ) has executed dozens of SWAT-type acts of terrorism against pro-life activists, including Mark Houck, and other ideological adversaries, not a single arrest has been made in connection with the “Jane’s Revenge” terrorist attacks against churches and pro-life centers.

After his harrowing arrest 13 days ago, Houck was charged by the DOJ with violating the Freedom of Access to Clinic Entrances (FACE) Act when he allegedly pushed an abortion clinic employee named Bruce Love twice in one day in October 2021.

— Article continues below Petition —
Stand with pro-life Catholic dad of 7 raided by Joe Biden's FBI
Show Petition Text
6786 have signed the petition.
Let's get to 7500!
Thank you for signing this petition!
Add your signature:
Show Petition Text

Houck pleaded not guilty to two counts on September 27 in a Philadelphia federal court.

The pro-life leader’s wife, Ryan-Marie, told LifeSiteNews the abortion facility worker had been harassing their 12-year-old son by using vulgar language and getting into the boy’s “personal space,” and that Houck had shoved him away to protect his son.

Breen explained that the case against his client had been tossed out of the state courts but was picked up again by the Biden administration’s DOJ almost a full year later.

“This is a political prosecution,” Breen added. “And what’s clear from the Department of Justice at its highest levels, which is directing this case, [is] that they are trying to send a message to pro-life and people of faith: ‘Don’t mess with us.’”

“They want to intimidate — they want to cause good people like Mark to stop praying and counseling at the abortion clinics of our country,” the attorney said. “And that’s not going to happen.”

The Pro-Life Coalition of Pennsylvania is sponsoring a public protest on Friday, from 11:00 a.m. to 12:00 noon at the U.S. Attorney’s Office in Philadelphia to express “Opposition to the Brazen Injustice Committed … against Mark & Ryan-Marie Houck & their Seven Children.” Supporters are asked to “Please attend this Rally and publicly express your resistance to this raid… and call for an end to the Biden Administration’s raids on their political opponents.”

Those who wish to make a financial contribution to the Houck family for legal and other expenses may do so here.

FBI has made no arrests in connection with Jane’s Revenge attacks on pregnancy centers, churches