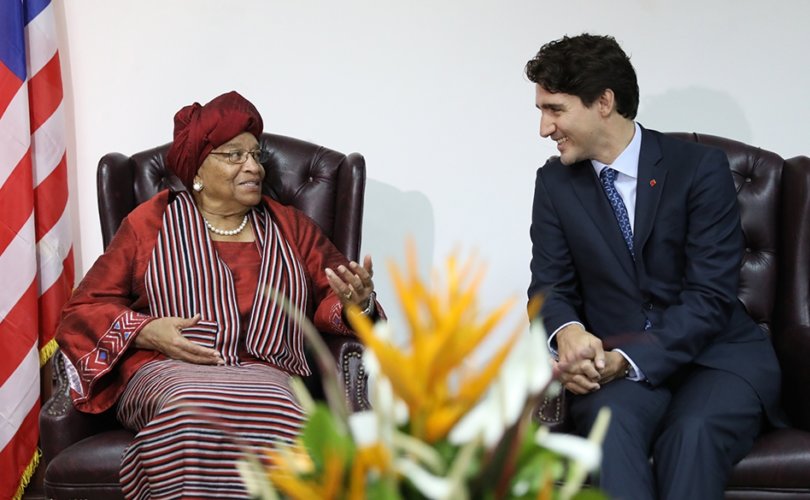 MONROVIA, Liberia, November 25, 2016 (LifeSiteNews) – Canadian Prime Minister Justin Trudeau began a two-day visit to the impoverished West African nation of Liberia this week by treading delicately around his government’s frank encouragement of homosexual and transgender status in Canada and internationally.

Global Affairs Canada’s website offers more than 130 links to projects around the world from Kashish to Manila and Dominica with which it is promoting homosexuality, but Trudeau shied from touting the issue in the heart of a region that is strongly opposed to that agenda.

Yet he is signalling that he will advocate “LGBT rights” in an address Saturday morning in Madagascar when speaking to La Francophonie, a consortium of the world’s nations with close ties to French language and culture.

Trudeau came to Liberia to talk about the $11.5 million his government was spreading across West Africa over the next five years to advance the economic and social status of women. He encouraged the development of agriculture and condemned violence against women without controversy.

But at a joint press conference with President Ellen Johnson Sirleaf a reporter asked him about the opposition to same-sex “marriage” in Liberia. (Sirleaf has won a Nobel Prize for her efforts towards the advancement of women but has been criticized for not applying herself similarly to the LGBT agenda.)

Trudeau responded, “The fact is, different countries have different paces of evolution in terms of recognizing and enshrining those rights, but we can see that there has been tremendous progress over the years in many different areas.”

When Sirleaf was asked to comment, she said, “Liberia has no laws that restrict the rights of individuals to their own choices.”

Liberian law does not mention homosexuality in its penal code, but it does criminalize as “sodomy” and “deviate sexual intercourse” any kind of non-genital sexual relations between unmarried partners, whether in same-sex or opposite-sex couplings.

According to a U.S. Department of State report in 2012, documented reports of harassment and violence against LGBT people are few, perhaps out of fear that complaints would bring retaliation.

“The…culture is strongly opposed to homosexuality,” the report stated. “LGBT persons were cautious about revealing their sexual identities, and groups that supported the rights of LGBT persons did so quietly due to fear of retaliation.”