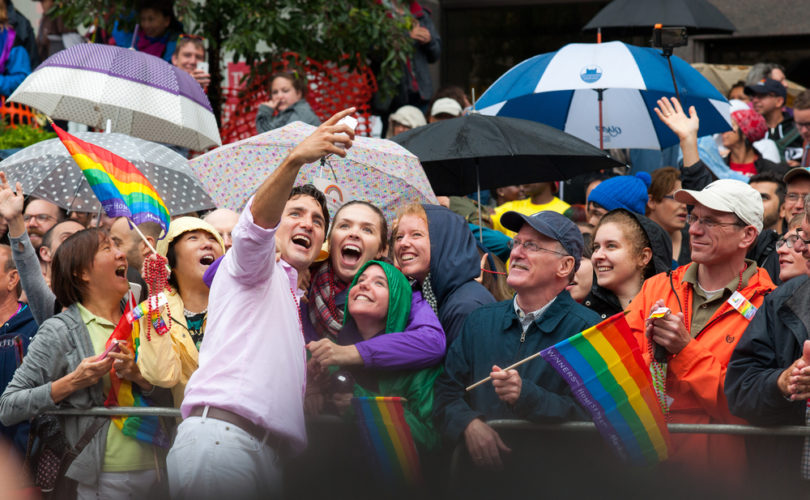 TORONTO, March 11, 2014 (LifeSiteNews.com) – The thin veneer of Toronto’s annual homosexual parade, ostensibly promoted as “family friendly,” has been further chipped away by a mainstream media columnist who insists that “in-your-face sexuality is the point of the damn thing.”

“Ultimately, there are worse things than seeing a penis flopping down Yonge Street,” Canada.com News Editor Lauren Strapagiel wrote in an article attacking the Toronto District School Board (TDSB) trustees who raised questions about the legality of public nudity at the pride parade.

Strapagiel called the trustees' concern “a fuss over what is essentially a red herring” and a “profound display of ignorance.” The homosexual festival “as a whole does not make 'family friendly' claims,” she argued, and so “the fuss about nudity is a manufactured controversy.”

She quotes Toronto Pride co-chair Sean Hillier justifying public nudity as a celebration of “sexual diversity and sexual expression and that doesn’t just apply to the LGBT community.” Parading naked in public, Hillier says, is done by “a very small [group] and it tends to be an isolated instance throughout the festival itself.”

The trustees targeted by Strapagiel put forward a motion, to be debated at last week's board meeting, requesting that the TDSB agree to ask Mayor Rob Ford and city councillors to clarify the city’s position on upholding the law.

Sotiropoulos told the Toronto Star that the board supports the event because it is touted as being “family friendly,” but he objects to the lack of police enforcement of a law that is in place to protect the public, and especially children, from lewd behavior.

“I have no problem participating with Pride — it’s such a wonderful event that’s also part of our board’s social justice piece — but I cannot sign off to participating and promoting an event where the laws against public nudity are being flouted,” said Sotiropoulos.

A report from Newstalk 1010 following last Wednesday’s board meeting said the meeting ended before trustees could debate the motion addressing nudity at the pride parade.

Before the meeting Sotiropoulos told reporters the issue is important because the board has a float in the parade and promotes it to its students.

The motion the trustees brought to the board states that nudity at the event “raises legal concerns and implications” for “TDSB students and their families.”

Sotiropoulos said he is also concerned that students at the parade are seeing Canadian law openly “flouted.”

Students, he said on the Tarek Fatah radio show, are “seeing the breaking of the laws of Canada,” adding that he does not understand “how being naked [in public] is part of being gay. I get stuck on that question. Why is that a necessary element to parade naked in the streets of Toronto to express what? I’m not sure, except for the flouting of the laws of this country.”

Homosexual activists defending nudity at pride parades say the purpose of the event is to express their “wanton sexuality and hedonism.”

Last month, Danny Glenwright, the managing editor at the homosexual news agency DailyXtra wrote a column responding to the controversy by encouraging parade participants to shed their clothing.

In a piece titled “Let’s get naked this Pride,” Glenwright mockingly suggested that those who have a problem with nakedness at the parade can “stay home” with their children and watch on TV “more palatable aspects of our world” such as “priests raping children.”

“It’s what we do with our naked bodies that kept us gays down for so long,” he wrote.

“I prefer to leave that all behind for a few hours on Pride and head downtown to celebrate gay rights and gay sex — and to protest those who hate us gays and the ways we seek pleasure.”

CLC encourages Toronto District School Board ratepayers and parents to make the motion put forward by the three trustees a municipal election issue in the October 27, 2014 Ontario elections, by voting out any trustees who vote against the motion.

CLC also urges parents to apply as delegates to the next TDSB meeting, to speak in favor of the important child-protection motion put forward by trustees Sam Sotiropoulos, Irene Atkinson and John Hastings.