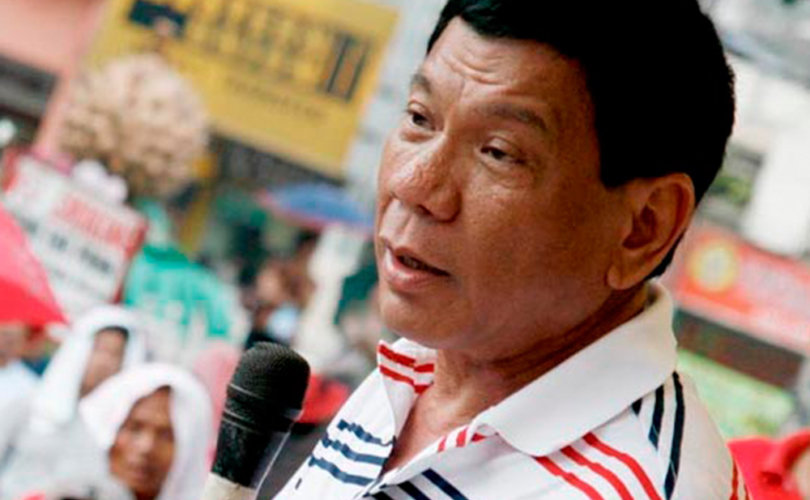 'I only want three children for every family,' says President-elect Rodrigo Duterte.

MANILA, Philippines, May 25, 2016 (LifeSiteNews) – The president-elect of the Philippines called on Sunday for a three-child policy, following shortly after an angry tirade against the bishops in the predominantly Catholic nation.

“I only want three children for every family,” said Rodrigo Duterte, who is set to take office in June.  “I'm a Christian, but I'm a realist so we have to do something with our overpopulation. I will defy the opinion or the belief of the Church.”

According to Reuters, the remarks came just one day after Duterte slammed the Catholic bishops in the country as “sons of whores,” asking rhetorically, “aren’t you ashamed?” “You ask so many favours, even from me,” he said, calling the Catholic Church “the most hypocritical institution.”

The president-elect had previously referred to the pope as “a son of a whore” in April.

Steve Phelan, the director of mission communications for Human Life International, said pro-lifers in the Philippines “cannot give an inch” when it comes to opposing population control.

“There’s been a huge upheaval in the Philippines [during] the last four years especially,” said Phelan.  “There was incredible pressure for well over a decade” for the Philippines to legalize contraception.

In 2012, the country’s Congress passed the Responsible Parenthood and Reproductive Health Act of 2012, known as the “RH Law” for short, which forces government health clinics to provide free contraceptives. An unsuccessful proposed version of the RH Law suggested a two-child policy.

The RH Law guaranteed the legality of contraception across the country; previously, some local governments had banned its sale and distribution in government-run clinics.  The law also mandated sex education in government schools.  It went all the way to the Philippine Supreme Court, which upheld it as constitutional in 2014.

There have been budgetary setbacks to the implementation of the RH Law, and in 2015, the Philippine Supreme Court banned the Department of Health from procuring, selling, distributing, or promoting Implanon, a potentially abortifacient contraceptive.  Nevertheless, the RH Law’s passage marked a significant shift in Philippine law.

“There’s still in the law a very strong advisement towards couples who have to get marriage certificates from the government to use…contraception,” Phelan said, and he anticipates the Philippines will soon act to legalize abortion now that contraception is encouraged.

Phelan also wondered whether Duterte had studied any neighboring countries with coercive population control practices, such as China.

“We hope that [Duterte is] advised by people who have a more sober outlook” and “recognize the gift that Filipinos are for their country…and don’t see them as a burden,” Phelan said.

“I don’t think [Duterte] has any idea of the human tragedy that this kind of government interference into the reproductive rights of his people would mean,” continued Mosher.  “Couples have a fundamental right, a natural right, to determine the number and spacing of their children.  The Filipinos have historically been generous in having children, in part because [of] their very family-oriented culture, in part because the country is overwhelmingly Catholic.”

Duterte  was a mayor for seven terms before his election, of which he has not yet officially been declared the winner despite his rivals’ conceding defeat.

“This president-elect is not really one for dialogue,” said Phelan, who predicted Duterte’s election would have “unforeseen” consequences.

“We hope people are vigilant and we hope that they keep reaching out to him to talk to him, but they cannot give an inch when it comes to either a three-child policy or even further expansion of the RH bill,” said Phelan.

“I’m in contact with pro-life groups in the Philippines and have assured them that pro-lifers in the United States stand in solidarity with them against this kind of intrusive, damaging population control program,” said Mosher.