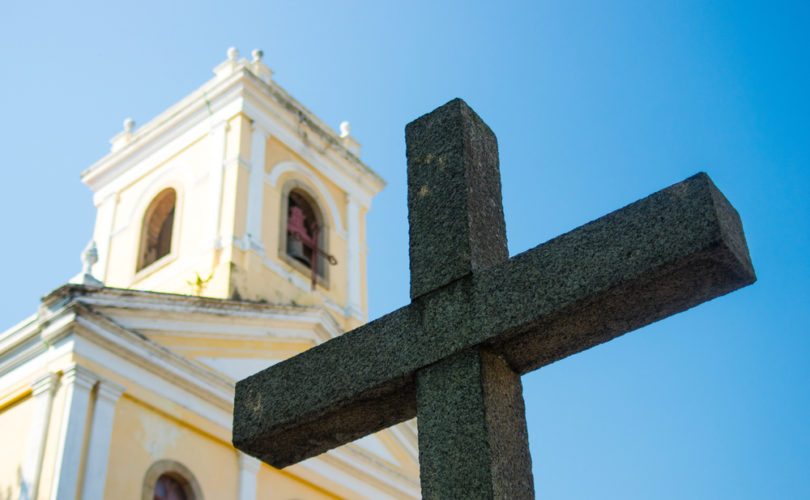 April 2, 2019 (LifeSiteNews) — Government  officials in a heavily populated region of China are offering cash incentives to citizens to report their neighbors who engage in what the government deems to be “illegal religious activities.”

The Bureau of Ethnic and Religious Affairs in Guangzhou — better known to westerners as Canton — is offering up to $1,500 to those who act as informants, uncovering underground church activity according to a report by Aisa News.

The newly instituted measure is meant to crack down primarily on underground Protestant communities but has set members of all religious faiths — including Catholics — on edge.

“The authorities could not have picked a better time, just before Easter to introduce these measures,” said a local priest in the report. “At this time, we often meditate on the passion of Jesus and Judas’ treachery for 30 pieces of silver. The Guangzhou government wants to turn people into many mini Judas.”

New regulations regarding the practice of religion enacted by the Chinese government in February 2018, have produced a more tyrannical environment for religious people in the communist state.

While presented as nothing more than a bureaucratic revision to existing regulations, the move was seen by many as a giant step backward toward increased state control of all religions by the nation’s communist government. Their concerns have been validated.

Chinese officials insist that their goal is benign “sinicization,” a process where foreign influences within the country are made more compatible with Chinese culture. In reality, it is a mandate to co-opt Christianity – a process that is exacting an increasingly quantifiable toll on Chinese Christians.

Far from benign, the sinicization process has created an increasingly oppressive environment for believers.

“It seems like virtually every week the Chinese Communist government reaches a new low,” Gary Bauer, member of the U.S. Commission on International Religious Freedom (USCIRF), told LifeSiteNews. “It’s disdain for this basic human right of being able to seek God and worship God as your heart tells you to do.”

“It appears to many of us on the commission that in the last couple of years that the Chinese government has literally declared war on faith,” said Bauer. “The crackdown on both the house churches and even the licensed churches are good examples of this terrible development.”

Perhaps counterintuitively to many, as China has continued to rise as an economic power and engage more heavily with the world beyond its borders, “its disrespect of religious liberty seems to be getting worse and worse,” said Bauer.

“We may never know how many people have lost their lives in China over the decades because of religious persecution,” noted Bauer, adding “every indication is it’s getting worse.”

“At USCIRF, our mandate is to speak the truth about this sort of thing and we will continue to do everything we can to expose what’s happening in China to Christians” as well as Muslims, Falun Gong, other religious beliefs.” Bauer noted how members of the Uighur sect have been put into camps to help them assimilate, but “we’re getting widespread reports of torture and beatings.”

“At the same time, there is this crackdown on the house churches, as well as well-established licensed churches. … we still hear reports of churches being demolished.”

“The government-sanctioned churches that are allowed to exist right now have unique restrictions,” explained Chinese Christian activist Bob Fu in an interview with The Stream last fall. “Each church has to install a facial-recognition camera in front of the pulpit. The purpose is to identify certain people in the congregation.”

Bauer spoke about a major church in Beijing, not too long ago, whose pastor refused to put facial recognition cameras in the church. The pastor refused and so “they took him and most of the church leadership away in the middle of the night and they have not been heard from since.”

Likewise, leaders within the underground Catholic Church who resist government control continue to live under the threat of severe sanctions and abduction.

As recently as last weekend, Cardinal Joseph Zen, Bishop emeritus of Hong Kong, tweeted, “Pray for the underground church in the northern province of Hebei,” after Bishop Augustine Cui Tai of Xuanhua was taken into custody.

Pray for the underground church in the northern province of Hebei.https://t.co/6HWy9KcsXQ

According to a Union of Catholic Asian News (UCANews) report, “His whereabouts are unknown.”

“China’s tyrannical abuse of the rights of faithful Catholics confirms its position as one of the worst religious freedom abusers in the world — right up there with North Korea,” asserted Robert P. George, McCormick Professor of Jurisprudence at Princeton University and former chairman of USCIRF.

There is a reason that China has been recommended for CPC (‘Countries of Particular Concern’) status in every annual report of the U.S. Commission on International Religious Freedom since the Commission was founded by act of Congress in 1998.

You are seeing that reason on display here. Catholics have long been victims of the tyrannical Chinese communist regime — but they are not alone. The regime also brutally persecutes Tibetan Buddhists, evangelical Protestant Christians, Uighur Muslims, and Falun Gong practitioners. It is an equal opportunity human rights violator. It fears, and seeks to crush, any civil society association — religious or otherwise — that could conceivably provide an authority structure outside its control.