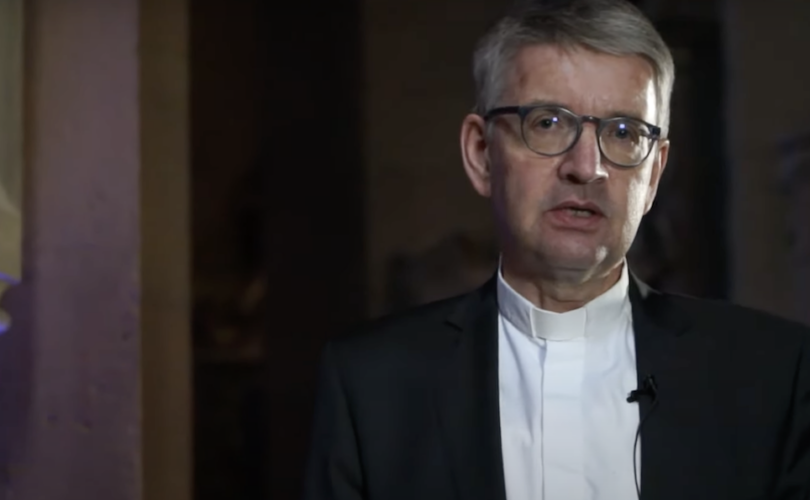 (LifeSiteNews) ― A group of faithful Catholic laity blasted the German bishop of the Diocese of Mainz in a letter and called for him to resign for establishing a pro-LGBT “queer-sensitive pastoral ministry.”

“Bishop Kohlgraf, you are incurring the wrath of God. One day you will have to answer to God. What is at stake is nothing less than your soul’s salvation,” the group states in the letter.

The letter urges Bishop Peter Kohlgraf to “abandon the immoral project of a ‘queer-sensitive pastoral ministry’.”

“Behind the seemingly harmless term ‘queer-sensitive pastoral ministry’ lies a subversive plan that you and many of your German fellow clergymen are pursuing together with officials of Catholic committees and associations,” the letter states, adding that the goal of this plan is to “undermine traditional Catholic sexual morality” and to replace it with “a hedonistic ethical surrogate that also declares ‘queer’ sexual practices to be normal and pleasing to God.”

“Where is your sensitivity for the preservation of the depositum fidei [deposit of faith]?” the authors of the letter ask Kohlgraf.

The letter concludes with a call for Kohlgraf to repent and resign his office: “Repent, make a public apology before God and do penance. Offer the Pope to renounce your episcopate. You are not suited for it.”

One of the tasks of the so-called “queer-sensitive pastoral ministry” is to provide education and training on the topic of “Strengthening Sensitivity to Sexual Diversity,” according to the website of the Diocese of Mainz.

Kohlgraf said that he believes that people with non-heterosexual orientations “feel marginalized and hurt by the church, its teachings, and its concrete behavior,” and started this queer-sensitive ministry as a result.

“The reality of queer people’s lives should also be reflected in the public life of the diocese,” one of the commissioners of the pro-homosexual ministry said.

Kohlgraf has been an outspoken dissenter on the Church’s teaching on sexuality. He questioned the Church’s demand for chastity for people who experience homosexual inclinations since they allegedly would not choose them. Kohlgraf wrote in a column that the Catholic Church needs to recognize that homosexuality occurs in the “animal world” and should not be thought of as a “mistake” in God’s order of creation.

LifeSiteNews columnist Pete Baklinski explained that Kohlgraf’s reasoning is fallacious, as it is built on the erroneous claim that someone can be “born gay”:

Below is the full text of the Catholic lay group’s letter:

according to an announcement on the website of the diocese of Mainz, today, Sunday, October 9, 2022, you intend to publicly commission a priest and a female lay theologian “in a service with the queer-sensitive pastoral ministry in the diocese of Mainz and hand them their decrees.”[1]

We, orthodox Catholics, almost all from the diocese of Mainz, hereby require you both to cancel this scandalous event and abandon the immoral project of a “queer-sensitive pastoral ministry.” As a bishop, you have the duty to represent the Church’s doctrine on faith and morals without reservation. We hereby demand that you fulfill this duty.

Behind the seemingly harmless term “queer-sensitive pastoral ministry” lies a subversive plan that you and many of your fellow German bishops are pursuing together with officials of Catholic committees and associations. The goal is to eradicate traditional Catholic sexual morality. It is to be replaced by a hedonistic ethical surrogate that also declares “queer” sexual practices to be normal and pleasing to God.

You are about to push through this plan in your diocese. But the diocese of Mainz is not your property, it is not a disposal mass. You serve the zeitgeist and the “queer” scene with a “sensitive” pastoral. But where is your sensitivity for the orthodox Catholics of your diocese? Where is your sensitivity for the preservation of the depositum fidei?

For some time now, church “blessing ceremonies” for homosexual couples and other irregular unions have been held in the bishopric of Mainz with your explicit approval.

You are not authorized to do any of this, Bishop. You are abusing your office as bishop. You are breaking the oath of office you took when you were consecrated bishop. Here, too, the question must be asked: Where is your sensitivity?

If you should actually carry out the planned “commissioning” today, you are doing something for which you have no competence whatsoever. Just like the blessing of morally inadmissible relationships, this “commissioning” is also null and void. You have no authority to do this. The decrees you want to hand over to the two “commissioners” are not worth the paper they are printed on. This does not change even if you carry out the “commissioning,” as planned, in a church in the context of a church service-like event. Speaking of church service, you are certainly not serving God, but rather someone else entirely. What you are organizing is a pseudo-liturgy and the simulation of an episcopal official act. You are desecrating the holy place and insulting the One who is truly present there.

The sermon you prepared for this “church service,” the text of which has been online since Friday is entitled: “There must be an end to being pushed into a life of lies.”[2] No, Bishop Kohlgraf, the doctrine of the Church does not push anyone into a life of lies. A life of lies arises when one breaks with the doctrine of the Church, blames the Church for it, and requires it to change its doctrine. It is you yourself, Bishop, who, by denying a significant part of Catholic doctrine on faith and morals and turning to the heresy of homosexual, gender, and queer ideology, is establishing a life of lies and wants to drag an entire diocese into it by exploiting his administrative power.

Bishop Kohlgraf, you are incurring the wrath of God. One day you will have to answer to God. What is at stake is nothing less than your soul’s salvation. Repent, make a public apology before God and do penance. Offer the Pope to renounce your episcopate. You are not suited for it.