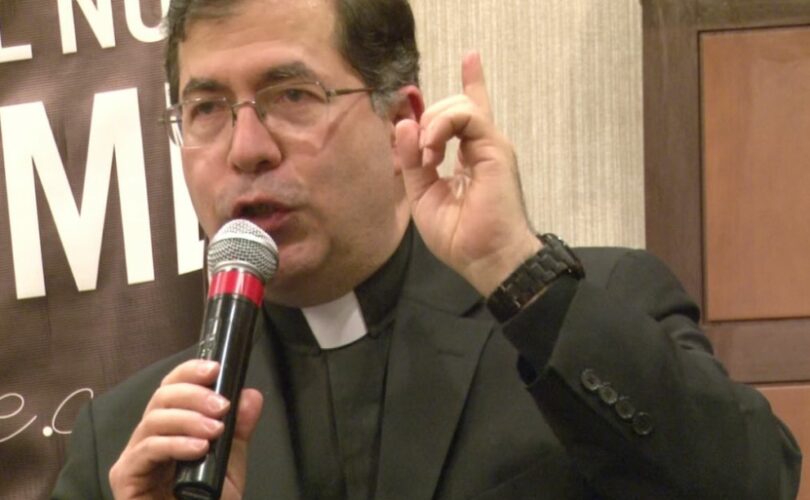 (LifeSiteNews) — In the wake of Father Frank Pavone’s sudden dismissal from the priesthood, a decision which sent shockwaves through the pro-life world, activists and leaders across the U.S. have spoken out in support of the beleaguered cleric and his work defending the life of the unborn.

According to a December 17 report by the Catholic News Agency, Pavone, who acts as the national director of Priests for Life and president of the National Pro-Life Religious Council, was dismissed from the priesthood for “blasphemous communications on social media” alongside “persistent disobedience of the lawful instructions of his diocesan bishop” in a December 13 letter from Archbishop Christophe Pierre, the apostolic nuncio to the U.S.

In comments to LifeSiteNews, many pro-life leaders expressed profound disbelief that Pavone, arguably the most outspoken Catholic cleric in defense of the unborn, would be subjected to censure from the Vatican.

Reggie Littlejohn, president of pro-life organization Women’s Rights Without Frontiers, stated that Pavone “is a beloved, generous priest, intensely committed to the Catholic faith and the protection of the unborn.”

“He is one of the finest fruits of the Catholic Church and deserves its support in defending a key teaching about the sanctity of life,” Littlejohn said, adding that “it is a travesty that the Vatican has issued a decision dismissing him from the priesthood.”

He has had no chance to defend himself, yet the letter states there is ‘no possibility of appeal.’ His summary dismissal without the chance even to know that he was being considered for laicization is an indefensible injustice perpetrated against one of the most magnificent priests of our time. Those who love Fr. Pavone should pray for him – and for the souls of those responsible for this grotesque malfeasance.

Pro-life attorney Royce Hood, who founded the Law of Life Summit and sits on the LifeSiteNews board of directors, commented:

We live in an era in which reason has been replaced with an empty blindness. Truth is no longer recognized as truth by those who seek to weaken the foundations of the natural law. Pray our church can return to the roots of Fides et Ratio.

In the meantime it is hard to understand God’s permissive will in times of uncertainty. But we must have faith. We must be confident that God is preparing the harvest.

Father Frank has been a friend for well over 10 years. His work has saved countless lives from the ravages of abortion and has helped countless others to heal after abortion. I sincerely hope he continues working to build a culture of life.

Former Planned Parenthood director-turned pro-life advocate Abby Johnson, who was mentored by Pavone during her conversion to Catholicism, characterized Pavone as “one of the most dedicated prolife warriors.”

Johnson lamented the Vatican decision to laicize Pavone, noting that other clerics who have openly supported causes antithetical to the Catholic Church’s moral and doctrinal teaching remain not only unchecked, but actively promoted by the Catholic hierarchy.

So, let’s tally the score: Fr. James Martin, a priest who supports gay ‘marriage’ and loads of other immoral acts – priest in good standing who continues to move up the Vatican chain of command.

Fr. Frank Pavone, a faithful priest who has been the director of Priests for Life for decades and has fought tirelessly for the unborn, their mothers, and former abortion clinic workers – removed from the priesthood…

The enemy is in our churches, friends. Every faith tradition. All different congregations. All ages. All cultures. He is sly, charming, unassuming, and incredibly convincing. Good will indeed look like evil and vice versa.

American Life League president and co-founder Judie Brown wrote to LifeSiteNews, saying that “in this age of error as ‘fact,’ Father Pavone has defended the Truth, Christ!”

“Sadly that Truth is the enemy of those persecuting him,” Brown stated before requesting prayers “for his complete vindication.”

— Article continues below Petition —
Tell Pope Francis that Fr. Frank Pavone's laicization must be overturned
Show Petition Text
46148 have signed the petition.
Let's get to 50000!
Thank you for signing this petition!
Add your signature:
Show Petition Text

Monica Miller, director of Citizens for a Pro-Life Society, said that news of Pavone’s laicization came as a “complete shock.”

For the Vatican to actually dismiss/revoke Father Frank Pavone’s status as a priest – to move him to the lay state is just too much to bear. Nothing makes any sense anymore. How is it possible that this man of God – who loves our Lord and His Church – be treated in this shameful fashion, all the while so-called Catholics like President Joe Biden cotinine to remain unscathed and sacrilegiously receive Our Lord’s Body and Blood in Holy Communion while facilitating the dismemberment of the bodies of the innocent unborn a priest like Fr. Frank has tirelessly defended? It’s madness – a true injustice to Fr. Pavone and so demoralizing to every pro-lifer! I pray for Fr. Frank and can only hope to God this can be righted.

Frank Pavone, whom I have known since 1987, is to me the most anointed pro-life leader in the United States. He is daring, profound, truthful, creative, caring, and an inspirational, if not anointed,  preacher; however, his forums will no longer be pulpits but podiums and media studios.

I cry for the Catholic Church, in one of its worst moves in American history. But Frank will persevere after this pathetic persecution, as he has done for decades, in a Church desperate for leadership and reform. I beg you all to Pray for Mr. Pavone and his great group Priests for Life (PFL). I will stand with Frank and PFL.

The Lepanto Institute asked in a tweet Sunday why Pavone has been laicized by Vatican orders but other clerics who have openly defied Church teaching and discipline remain in good standing.

The Coalition for Canceled Priests released a statement in the wake of Pavone’s dismissal, clarifying its unequivocal support of Pavone and his pro-life ministry.

“This latest and very extreme level of cancelation is the culmination of a decade long attempt to silence Fr. Pavone,” the statement reads. “Pro-life leaders have recently faced the wrath of the U.S. Federal Government as retribution for the reversal of Roe v. Wade. They also don’t need the wrath of leftist prelates. Like what Fr. Pavone said, they need encouragement.”

“We’ve seen time after time faithful Catholic priests being silenced, handcuffed, persecuted, and outright canceled while priests who overtly oppose Church Teachings are rewarded and even promoted,” the group wrote, adding that the situation represents “a sad and tragic irony… that the Vatican hierarchy and leftist U.S. prelates would outright cancel the most preeminent defender of the unborn in our global Church today.”

Father John Lovell, co-founder of the Coalition for Canceled Priests, issued his own statement, describing Pavone as “fearless” despite becoming the latest “victim of the cancel culture in the Church.”

“This latest, and very prominent, cancelation shows all of us that it is not about just the Traditional Latin Mass, but rather any and all aspects of Catholic Orthodoxy, which includes the moral aspects,” Lovell stated. “May this be an opportunity to pray and fast not only for Fr. Pavone, but for an end to the human sacrifice that is called abortion.”

READ: Fr. Pavone’s message to Pope Francis: ‘I want to continue serving as a faithful priest’

Conservative commentators also spoke out, with some taking to social media to voice criticism of Pavone’s dismissal from the priesthood.

Meanwhile @JamesMartinSJ continues to openly defy the church’s moral teachings every day with absolutely no consequence.

Pope Francis is a disgrace. https://t.co/3wQgpJkJRl

Deeply shocking! Evidently the reason is he would not submit to his bishop’s attempt to restrict and control his organization “Priests for Life.”

Newsmax anchor Greg Kelly tweeted his shock at the news of Pavone’s dismissal, describing the priest as a “hero.”

What the hell is going on??? Father Frank PAVONE is a HERO. How many priests who MOLESTED CHILDREN have been allowed to stay in the priesthood, yet they KICK OUT Father Frank for making the case Against Abortion. SOMETHING IS VERY WRONG! pic.twitter.com/6ySkfUXwHJ

Alongside consistently defending the life of the unborn, Pavone has been politically active. Throwing his full support behind former President Donald Trump, Pavone served on his 2016 campaign, and in 2020 played an advisory role in the Catholics for Trump group.

According to Catholic News Agency, an accompanying statement to Archbishop Christophe Pierre’s notification explains that “Father Pavone was given ample opportunity to defend himself in the canonical proceedings, and he was also given multiple opportunities to submit himself to the authority of his diocesan bishop.”

“It was determined that Father Pavone had no reasonable justification for his actions,” the explanatory note reads.

Pavone, however, denied knowledge of the judgement in comments to CNA.