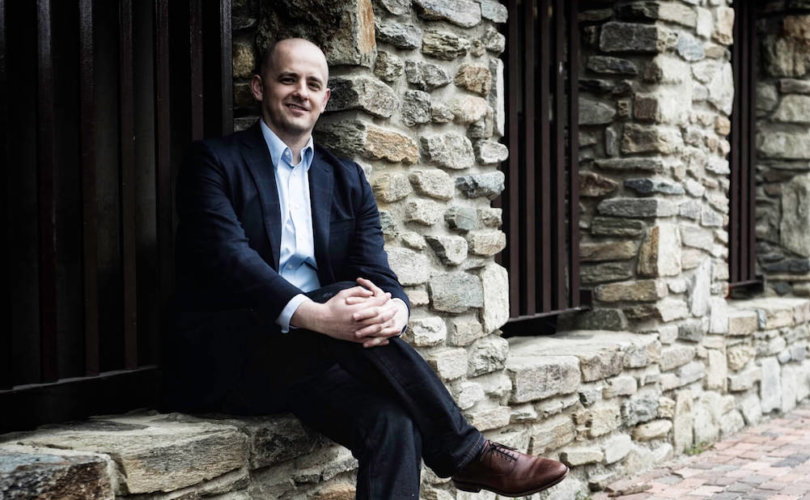 WASHINGTON, D.C., August 11, 2016 (LifeSiteNews) – Evan McMullin, a 40-year-old former CIA officer and Goldman Sachs employee, has thrown his hat into the ring as an independent candidate for president.

The lifelong Republican says he would not attempt to restore the traditional definition of marriage and opposes federal funding for abortion. Despite the low profile of his nascent campaign, announced this week, experts say his candidacy could tip the presidential election to Hillary Clinton.

“Move on” from marriage

Evan McMullin told Mark Halperin he is personally opposed to redefining marriage but that he would do nothing to reverse the Supreme Court’s ruling on the Bloomberg News webcast, “With All Due Respect.”

“As a member of the Church of Jesus Christ of Latter-Day Saints, I believe in traditional marriage between a man and a woman, but I respect the decision of the Court, and I think it's time to move on,” McMullin said, echoing moderate Republican presidential hopefuls.

When pressed, McMullin said he would have “ideally” liked to see the issue decided by the states, “but it's been handled by the Supreme Court, and that's where it is.”

McMullin said he bases his definition of marriage on his Mormon faith, but “my faith isn't everybody else's faith. I make my decisions for me [based] on those kinds of things.”

When Halperin asked if a President McMullin would appoint Supreme Court justices who would overturn the case nullifying state marriage protection laws nationwide, Obergefell v. Hodges, he replied, “I wouldn't.”

Donald Trump has said he would “strongly consider” appointing justices committed to overturning Obergefell and returning the issue to the states.

Against federal funding of abortion

McMullin opposes the public funding of abortion-on-demand and believes Roe v. Wade should be overturned, according to NPR. His brand new campaign website positions him as an opponent of abortion, but has scant specifics.

“Our respect for life is the most important measure of our humanity. From conception to death – and any time in between – life is precious and we have a responsibility to protect it,” his website says. “A culture that subsidizes abortion on demand runs counter to the fundamental American belief in the potential of every person – it undermines the dignity of mother and child alike.”

He also asks people to “work together to increase support and resources to reduce unintended pregnancies and encourage adoption.”

As a new candidate, it is not clear what specific laws or measures McMullin would support.

Donald Trump has said he would sign the Pain Capable Unborn Child Protection Act and appoint only pro-life justices to the Supreme Court.

McMullin refused to answer whether he had ever killed another human being. However, he admitted he had “served in war zones and conflict zones, and part of our role at the [Central Intelligence] Agency was to eliminate threats,” and his assignment required him “to assist efforts to take them off the battlefield in one way or another.”

When told he was being opaque, McMullin replied, “I believe I'm totally open.”

On other pressing issues, Evan McMullin believes illegal immigrants should be given “a path to legal residence and in some cases citizenship.” He favors entitlement reform and school choice. He supports free trade agreements and advocates an activist foreign policy to combat “global instability.” He told Halperin that Syrian President Bashar “Assad should go. I don't think we can allow him to stay there if we ever hope to defeat ISIS.”

McMullin is the latest – and so far, only successful – candidate fielded by the “Never Trump” movemeent. McMullin is strongly supported by the group Better for America, a nonprofit funded by Patheos investor John Kingston III and supported by former New Jersey Governor Christie Todd Whitman. Several employees have resigned the 501(c)4 in order to work in McMullin's campaign.

Aside from his stint in the CIA, which began when he was in college, McMullin worked on Capitol Hill and said he “learned a lot” about business from his three years working at the international investment firm Goldman Sachs.

McMullin, who is not married, worked for three years in the San Francisco office of Goldman Sachs, which is one of the largest contributors to Hillary Clinton’s political career behind EMILY’s List.

His candidacy could tip Utah, and the election, to Hillary Clinton

McMullin’s campaign already finds itself far behind, having missed filing deadlines to appear on some state ballots. However, the Provo-born candidate is said to be focusing his efforts on Utah, where polls show Hillary Clinton within striking distance of Donald Trump. No Democrat has carried the state since 1964.

Utah is vital enough to Donald Trump's electoral fortunes that “he could win Florida, Pennsylvania, and Ohio, the trifecta he’s banking on for national victory, and … still lose the election narrowly to Hillary,” writes AllahPundit at HotAir.com.

The Clinton campaign is said to be expanding its operations in the state in hopes of an upset.