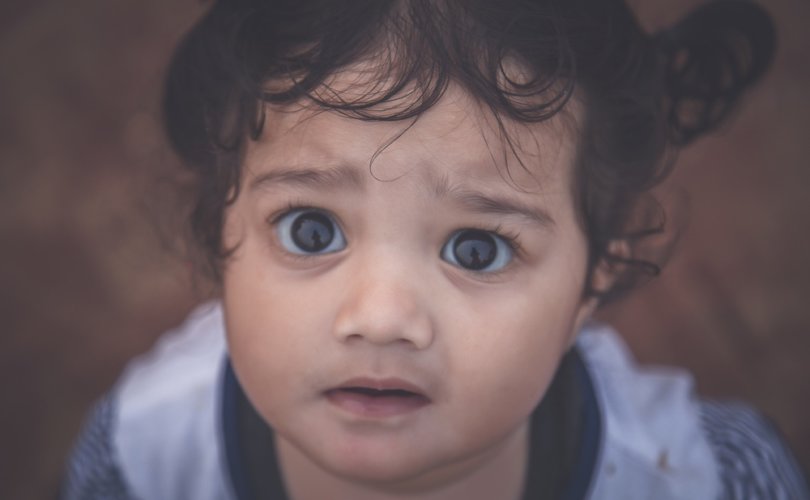 A government report shows India has an alarming imbalanced ratio of boys to girls: For every 100 females born in India, there are 107.6 males birthed.  The natural average is 105 to 100.

“Couples’ tendency to keep trying until a boy is born has led to the birth of as many as 21 million…unwanted…girls,” CNN reported on the matter. “The preference for boys and the availability of sex-selective operations, although illegal in India, means there’s a gender gap of as many as 63 million girls, classified in the report as ‘missing.’”

As LifeSiteNews has reported, “missing,” like “sex selection operations” are euphemisms for abortion.

Targetting females for abortion is rampant across the nation, even though it is technically illegal.

HLI’s Milagres Pereira, who lives in India, shared an all-too-common scenario.  “A couple of miles away from my place a well educated and working couple killed three babies in a womb when they discovered they were girls,” he told LifeSiteNews via email.

“The slogan ‘Pre-Natal Sex Scanning is a Crime’ is all over government hospitals with huge fines and imprisonment notices, but they do not scare anyone because our nation has been deeply rooted in abortion since its legalization in 1971.”

Female infanticide is a growing practice in the country as well.

“Even now there are places where untrained village mid-wives have been known to put a spoonful of un-husked rice into the (newborn’s) throat, so the soaked rice expands and chokes the child to death,” Pereira related.  “As horrible as it may sound, this is the truth.  There are worse (means of sex selection) than what CNN has reported.”

“The gender gap epidemic that India is facing right now is none other than modern day eugenics,” Tara Shaver of Abortion Free New Mexico told LifeSiteNews. “The belief that one human being has more value or is less of a burden results in the skewed sex ratios of countries like India and China.”

Dr. Michael Parker said India’s practice “makes a distinction that one sex, mainly female, is less inherently worthy of life.  The Catholic Medical Association denounces this utilitarian view of the child.  All children regardless of sex are entitled to the right to life.”

“India’s skewed population is the end result of a lack of appreciation for the differences between males and females, not to mention a bias against welcoming the children God deigns to bless a family with as part of His plan,” the American Life League’s Judie Brown said.

“Only in a culture where the human person is valued because he is an individual, regardless of gender, can this challenging imbalance be fixed.”

“We must expose the lethal sex discrimination and the anti-woman hypocrisy in the media which gives cover to the horrific practice of killing babies for the crime of being female,” Faith2Action’s Janet Porter told LifeSiteNews. “It is now obvious the fake news cares more about abortion than they do about the rights of girls and women,” the Heartbeat Bill champion said.

Amidst India’s gendercide, women’s rights advocates are largely and strangely silent.  Marie Tasy of New Jersey Right to Life asked, “Why aren’t all the #MeToo feminists protesting the systematic elimination of their gender?”

“Where are the women’s groups to decry this blatant discrimination against females?” Mark Harrington of Created Equal asked.  “Sadly, they are leading the opposition to efforts to ban sex-selection abortions.”

“The practice of aborting based on gender affirms a sexist notion that girls and women must prove they are desirable in order to be granted human rights,” Sacramento pro-life attorney Megan Fera told LifeSiteNews.  “Those who believe in equality between men and women must oppose sex selection in abortion.”

Jill Stanek, National Campaign Chair for the Susan B. Anthony List, agrees. “This discrimination is a major blind spot for the modern feminist movement, which is failing women and girls with its extreme devotion to abortion on demand.”

“Sex selection abortions have the added nastiness of targeted bigotry,” Paula Westwood, Executive Director of the Right to Life of Greater Cincinnati told LifeSiteNews.  “The fact that unwanted little girls are the primary victims should have every feminist up in arms to protect them, but there is loud silence.  Because sacrifice to the god of Abortion is more important than protecting tiny human beings.”

“Abortions already exterminate half of all females in the womb.  Yet pro-abortion feminists have yet to address this injustice,” Shaver added.  “Until they do recognize the use of abortion as a means of targeting the female population globally, they really can’t claim to be true feminists.  True feminists embrace the fact that women are vital to society as the only ones privileged to carry new life in our wombs.”

“Abortion is oppression in its most deadly form,” Heartbeat International president Jor-El Godsey said.  “No child should ever be killed just because she is a girl.  Every woman deserves the right to be born. Every mother deserves to meet and hold her precious daughter.”

“A nation that has done such harm to its own women is in great need of healing, hope and help,” Godsey concluded.  ‘We see that here in America, and we see it all over the world –including in India– wherever God’s people rise up to serve on the mission field created by abortion.”