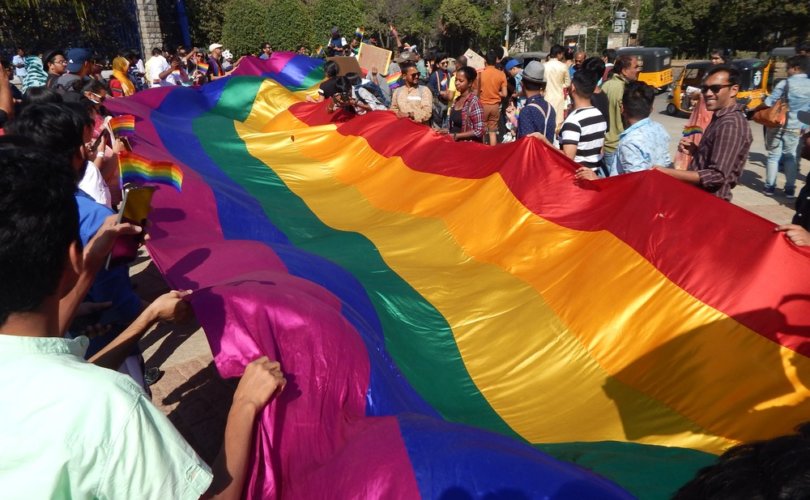 NEW DELHI, September 7, 2018 (LifeSiteNews) – The Supreme Court of India ruled Thursday to strike down a provision of a longstanding law criminalizing homosexual sex.

The law applies to anyone who engages in the specified acts. While pro-LGBT groups claimed it was used to “harass and abuse” homosexuals specifically, the BBC says it “was rarely invoked when it involved consenting adults.”

However, the court also stressed that the ruling did not strike down Section 377’s ban on sex with children or animals, and that it was not changing the country’s marriage or inheritance laws. India does not recognize same-sex “marriages.” The Supreme Court did create a “third gender” status in 2014 for individuals who consider themselves transgendered.

This week’s decision follows a winding legal battle since 2001, when legislation to repeal Section 377 was first introduced. A lower court ruled for decriminalization in 2009, but the Supreme Court reversed it in 2013. Pro-LGBT activists petitioned the court to reconsider, and it agreed to do so in 2016.

Pro-homosexual activists responded to the ruling with celebration, marching with a rainbow banner in Mumbai and releasing balloons in Bangalore. “I’m elated,” writer and activist Harish Iyer said. “We have thrown out the British once again.”

Others, meanwhile, blasted the ruling as misguided and dangerous.

“The decision of a two-judge bench has been overturned by a five-judge bench,” said Subramanian Swamy, an MP with India’s Bharatiya Janata Party. “If this freedom leads to excesses, including paedophilia, gay bars, increase in HIV cases, etc, we can have a seven-judge bench to overturn this. There is no finality to the Supreme Court's judgment today.”

“We are giving credibility and legitimacy to mentally sick people,” All India Hindu Mahasabha president Swami Chakrapani declared according to the New York Times.

Christian, Hindu, and Muslim religious leaders also expressed concern that the ruling would be taken as a moral endorsement of homosexuality. The Catholic Bishops' Conference of India stressed that while it “respects the dignity of homosexuals,” it must be remembered that “what is legal is not equal to moral acceptability,” and sodomy “violates the purpose of human sexuality, which is procreation.”

Pro-LGBT voices also predicted that the sodomy ruling could open the floodgates to further cultural changes. “It’s in our favour,” said a 19-year-old identified only as Smriti. “It’s a great first step.”

Ajit Prakash Shah, the former Delhi High Court justice behind the 2009 decriminalization ruling, wrote at the Times of India Friday that he wants the latest ruling to have a “transnational” impact. “The effect of this judgement is especially likely to be felt in other common law countries, and it will, hopefully, provide an impetus to those countries” to strike down similar laws.