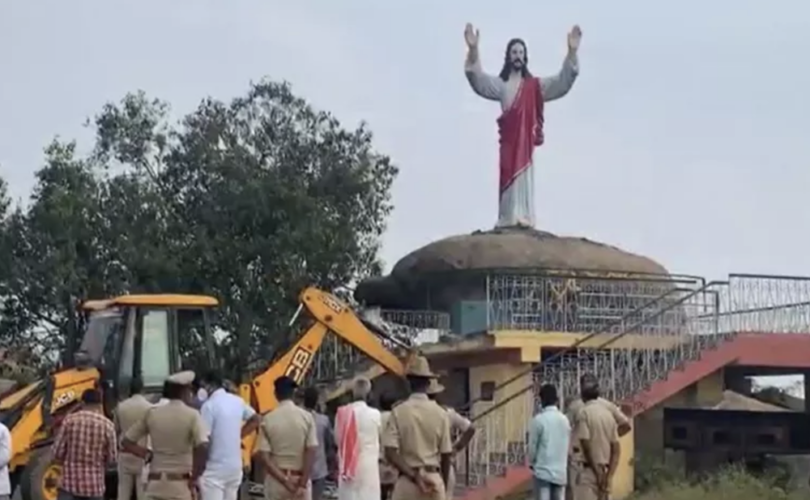 BANGALORE, India (LifeSiteNews) – An Indian archbishop denounced local officials in the state of Karnataka for destroying a statue of Jesus Christ in what he says is part of a broader pattern of violence against Christianity.

Vatican News reported that the controversy concerns a 6-meter-tall statue of Jesus and the Stations of the Cross that stood in Karnataka’s Gokunte village. Shobitha R., the revenue officer of Mulbagal, had the statue torn down on February 14 as part of a dispute with local church authorities over whether the statue had been built on government land.

Archbishop Peter Machado of Bangalore, Karnataka’s capital, argued that the demolition violated a stay order issued by the High Court that the land dispute had not yet been fully adjudicated.

Shobitha “refused to cooperate and even to share the fresh directives of the court if any,” Machado said. “We were not served with a written notice of the impending action, which she went ahead with the determined notion to demolish the structure.”

“The systematic and ill-conceived demolition drive is pursued with dogged determination by the government and its machinery,” he lamented. “Are there the pressures from fundamentalist groups who are bent on the demolition of these Christian structures? Does the government have any control over such fringe elements?”

Machado added that last fall saw the enactment of a law called the Karnataka Religious Structures (Protection) Act, which provides for the protection of preexisting religious structures on government land, “notwithstanding anything contained in any law for the time being in force or any judgment, decree or order of any court, tribunal or authority.”

“In the last two years, we have seen demolitions occurring at six such places on the hills, and systematic attacks on the Churches across the state,” continued the archbishop, who asked if it was “too big an expectation from the government for any act of benevolence to the Christian community.”

“Notwithstanding these ill-conceived acts, we still hope and pray that the government will protect our places of worship, religious symbols and sacred structures, and that it does not continue to hurt the religious sentiments of the Christian minority,” he said.

Christians represent just 2.4 percent of the population of the predominantly Hindu India, with more than half of the country’s Christians residing in the south and three-quarters of which identifying with lower castes. Last month, the Indian government reversed a ban on a permit for Mother Teresa’s Missionaries of Charity to receive foreign funding.