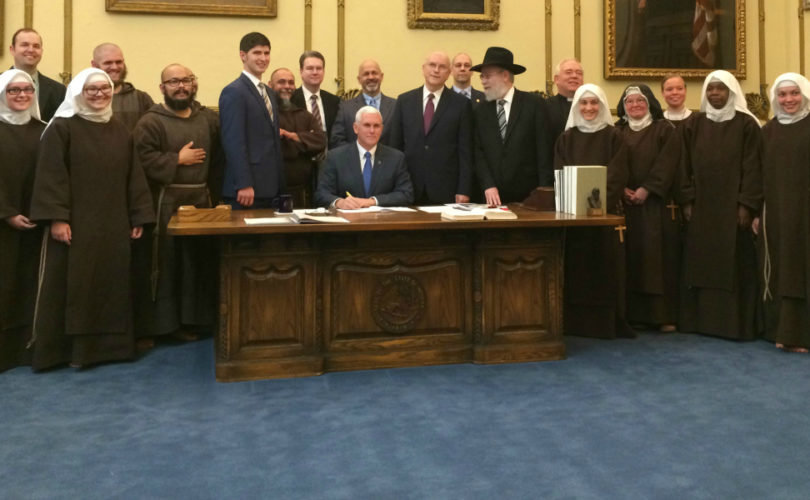 INDIANAPOLIS, IN, March 27, 2015 (LifeSiteNews.com) – On Thursday, Indiana became the 20th state to prevent the government from forcing people of faith to violate their religious beliefs in business or the public square.

“The Constitution of the United States and the Indiana Constitution both provide strong recognition of the freedom of religion, but today, many people of faith feel their religious liberty is under attack by government action,” Pence said.

Gov. Pence, a possible dark horse candidate for president in 2016, cited court cases brought by religious organizations and employers, including Catholic universities, against the HHS mandate. “One need look no further than the recent litigation concerning the Affordable Care Act. A private business and our own University of Notre Dame had to file lawsuits challenging provisions that required them to offer insurance coverage in violation of their religious views.”

The new law could also prevent Christian business owners from being compelled to bake a cake or take photographs of a same-sex “marriage” ceremony, if doing so violates their faith. In recent years, business owners have seen an increased level of prosecution for denying such services, despite their religious and moral beliefs.

The state's pro-life organization applauded Pence for his stance. “Indiana's pro-life community is grateful to Gov. Mike Pence for signing the Religious Freedom Restoration Act into law,” said Indiana Right to Life's president and CEO Mike Fichter. “This bill will give pro-lifers a necessary legal recourse if they are pressured to support abortion against their deeply-held religious beliefs.”

“RFRA is an important bill to protect the religious freedom of Hoosiers who believe the right to life comes from God, not government,” he said.

The state RFRA is based on the federal bill introduced by Sen. Chuck Schumer, D-NY, and signed into law by President Bill Clinton in 1993. The Supreme Court cited the federal law when it ruled that Hobby Lobby had the right to refuse to fund abortion-inducing drugs, if doing so violated its owners' sincerely held religious beliefs.

In signing the measure – similar to the one Arizona Gov. Jan Brewer vetoed – Pence and the state of Indiana have faced a torrent of venom from opponents of the bill, who claim it grants a “right to discriminate” and raises the spectre of segregation.

“They've basically said, as long as your religion tells you to, it's OK to discriminate against people,” said Sarah Warbelow, legal director of the Human Rights Campaign, a national homosexual pressure group.

The Disciples of Christ, a liberal Protestant denomination based in the state capital, has said it will move its 2017 annual convention if the RFRA became state law. The NCAA warned the bill's adoption “might affect future events” in the Hoosier state.

Pence denied such concerns, saying, “This bill is not about discrimination, and if I thought it legalized discrimination in any way I would've vetoed it.”

The bill's supporters say that, under the Obama administration, it is Christians who are most likely to suffer discrimination.

“Originally RFRA laws were intended to protect small religious groups from undue burdens on practicing their faith in public life,” said Mark Tooley, president of the Institute on Religion and Democracy. “It was not imagined there would come a day when laws might seek to jail or financially destroy nuns, rabbis or Christian camp counselors who prefer to abstain from the next wave of sexual and gender experimentation. And there's always a next wave.”

The bill's supporters note that it does not end the government's right to coerce people of faith into violating their conscience in every situation. However, it requires that doing so has to serve a compelling government interest and the government must use the least restrictive means possible. “There will be times when a state or federal government can show it has a compelling reason for burdening religious expression – to ensure public safety, for instance,” said Sarah Torre, an expert at the Heritage Foundation. “But Religious Freedom Restoration Acts set a high bar for the government to meet in order to restrict religious freedom.”

Restricting the ability of government to interfere in people's private decisions, especially their religious decisions, is the very purpose of the Constitution, its supporters say.

“Religious freedom is the cornerstone of all liberty for all people,” Tooley said. “Deny or reduce it, and there are no ultimate limits on the state's power to coerce.”