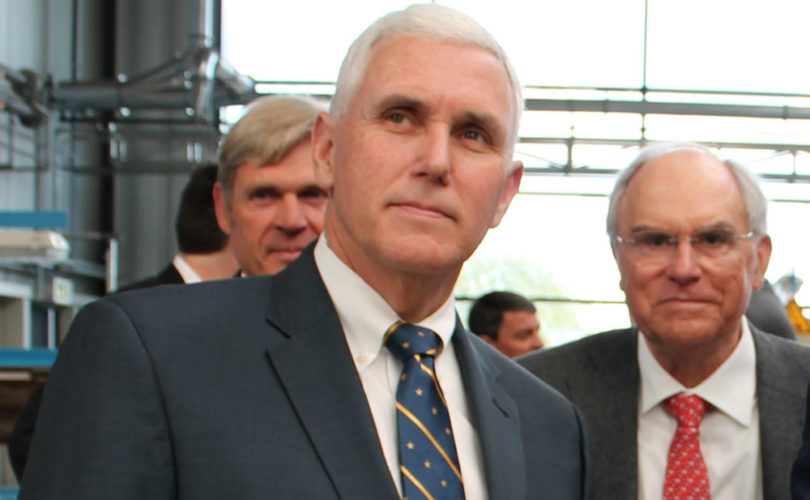 Update: Trump announced Thursday night that he will now postpone the announcement in the wake of the attack in Nice, France. He tweeted:

In light of the horrible attack in Nice, France, I have postponed tomorrow's news conference concerning my Vice Presidential announcement.

Trump spokeswoman Hope Hicks told the media that “a decision has not been made” on the matter. And Mr. Trump personally threw cold water on the reports this afternoon, telling talk radio host Michael Savage, “I haven’t made that decision yet. I’ll make it today, maybe tomorrow.”

His campaign announced he will make his official announcements at 11 a.m. on Friday at the New York Hilton Midtown.

Political media report that multiple sources close to both campaigns have confirmed Pence is Trump's pick. The Hill, an influential Beltway outlet, reported a 95 percent probability of a Trump-Pence ticket days ago.

The Indianapolis Star reports it has confirmed that Pence, who is running for re-election, will be named to the post tomorrow morning.

The one-term governor is a former U.S. congressman popular with the GOP's fiscal and social conservatives. He was known for long participation in Christian Bible studies and supporting conservative causes across the board, from defunding Planned Parenthood to opposing the TARP bailout. In the House, Pence introduced a modest immigration restriction policy that was somewhat more moderate than, but compatible with, Mr. Trump's stand on his signature issue.

National pro-life leaders say Pence would help reassure them on the issue of abortion. However, conservatives say Pence has drifted from his convictions on protecting religious liberty as governor.

“Mr. Trump’s selection of Gov. Mike Pence is an affirmation of the pro-life commitments he’s made and will rally the pro-life grassroots,” said Susan B. Anthony List President Marjorie Dannenfelser. “Gov. Pence has proven to be a pro-life champion both during his time in Congress and as Governor of Indiana. It was Mike Pence who led the effort to defund Planned Parenthood in Congress, and it was Gov. Pence who signed into law a historic bill protecting unborn children from lethal discrimination in the womb.”

Kristan Hawkins, president of Students for Life of America, called Pence “a tested pro-life conservative” who fought “in the trenches with us on several important fights. The pro-life movement should be thrilled with this pick.”

“Mike Pence is a pro-life trailblazer,” she said. “Mr. Trump could not have made a better choice.”

State pro-life leaders also reiterated that Pence is a pro-life politician with a track record.

“Gov. Pence is devoted to protecting the unborn and their mothers,” said Indiana Right to Life President Mike Fichter. “Gov. Pence's pro-life stance is more than a talking point; Gov. Pence has put his pro-life position into action time and time again.”

His record in the House of Representatives similarly shows strong support for pro-life legislation.

But national leaders say he has been less impressive on family issues, including protecting religious liberty and objecting to federal guidelines imposing gender-neutral restrooms and showers on public schools.

Last March, Pence signed a statewide Religious Freedom Restoration Act (RFRA), based on the 1993 legislation adopted by President Bill Clinton. The original Indiana version would have prevented the government from forcing businesses to participate in same-sex “wedding” ceremonies if doing so would violate a sincerely held belief.

But after a backlash from the nation's LGBT activists, Pence backed down and asked state legislators to amend the bill, stripping out protections on the basis of sexual preference and gender identity.

Pence “caved-in to the radical homosexual lobby and abruptly demanded amendments to the bill he had just signed,” wrote Richard Viguerie, a godfather of the conservative movement with five decades of political experience, on his website, ConservativeHQ.com. “Mike Pence did much the same thing on Common Core and earned the enmity of Indiana’s grassroots local control and education reform movement in the process.”

“Mike Pence collapsed,” said AFR Talk radio host Bryan Fischer on his program this afternoon. “He betrayed his convictions” – which Fischer said were legitimate – “to sign a much weaker bill.”

Some see signs of concern over his non-action on transgender restrooms, as well.

While Pence said President Obama's controversial federal guidance that public schools must allow members of one biological sex to use the showers, locker rooms, and restrooms of the opposite sex was an overreach, he did not indicate how state school districts should react.

He said the decision should be left to local schools, some of which have an open restroom policy.

The state Superintendent of Public Instruction, Glenda Ritz, announced that she supports the measure. Gov. Pence's office refused multiple requests for comment on the matter from LifeSiteNews at the time.

Indiana is not yet among the 23 states that have filed two multistate lawsuits against the federal transgender guidance.

“Donald Trump could do a lot worse than Mike Pence as his running mate,” Viguerie said. “However, if he expects that the selection of Pence will close the deal with conservatives he is sadly mistaken.”

And then there were two?

Others who had been, or may still be under consideration for the vice presidential slot include Newt Gingrich, Chris Christie, Rick Santorum, Sen. Jeff Sessions, and Lt. Gen. Michael Flynn.

Oklahoma Gov. Mary Fallin had been rumored to be on the list. However, she announced Sunday that she was not being vetted. Gov. Fallin is scheduled to address the Republican National Convention on Friday, while the vice presidential nominee is slotted to speak Thursday.

Gingrich is scheduled to speak separately at the convention on Thursday.

In a live video feed this afternoon, Gingrich said he knew of no final decision but believed the job came down to him or Pence.