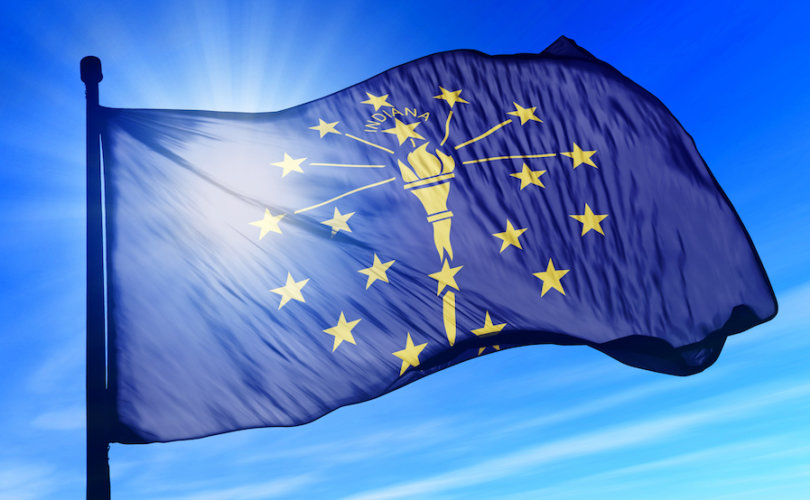 INDIANAPOLIS, Indiana (LifeSiteNews) – In a victory for sports fairness and biological reality, Indiana House lawmakers voted yesterday to ban males who identify as “transgender” from competing in girls’ sports.

HB 1041 prohibits males, based on their sex and in accordance with genetics and reproductive biology, from participating on teams for women and girls.

The bill, authored by Greenwood Republican Rep. Michelle Davis, applies to all K-12 public schools and school districts, as well as any private school teams that compete against public school students. It doesn’t cover higher education.

A section in the bill would also require schools to create a grievance process allowing parents or students to report violations. Students denied athletic opportunity or otherwise injured due to violations of the bill could sue their schools for damages.

If enacted, HB 1041 would make Indiana the tenth state to approve legislation that protects sports fairness from transgender ideology. Governors in nine states, including Florida and Texas, have signed transgender sports bills, amid recent reports of biological males injuring female opponents and taking opportunities from girls across the country.

Studies have repeatedly shown that gender-confused males massively outperform women in athletic competitions, regardless of attempts at a feminized appearance. A recent study published in Sports Medicine found that a year of transgender hormone drugs results in “very modest changes” in the inherent strength advantages of men.

Indiana Gov. Eric Holcomb, a Republican, has not revealed his stance on HB 1041, though he’s taken pro-LGBT positions in the past and unsuccessfully pressured lawmakers to include “gender identity” and “sexual orientation” in a 2019 hate crimes bill.

In addition to HB 1041, Indiana lawmakers have introduced several bills to push back against the radical transgender movement. HB 1348 would prohibit people 12 years old and up from entering bathrooms designated for the opposite sex, following outrage over the Loudoun County “gender-fluid” bathroom rape scandal.

HB 1399 would ban changing a listed gender on a birth certificate or permanent record to contradict an individual’s immutable biological sex.

A Senate bill, SB 402, would clarify that not using transgender pronouns is not child abuse under state law. Another Senate measure authored by Republican state Sen. Dennis Kruse would outlaw transgender drugs and surgeries for minors, but Kruse told The Indianapolis Star that it will not be advancing.

Republicans in more than a dozen other states have also filed legislation in the first weeks of 2022 to halt attempts to redefine biological sex in school sports or protect kids from transgender drugs and surgeries.