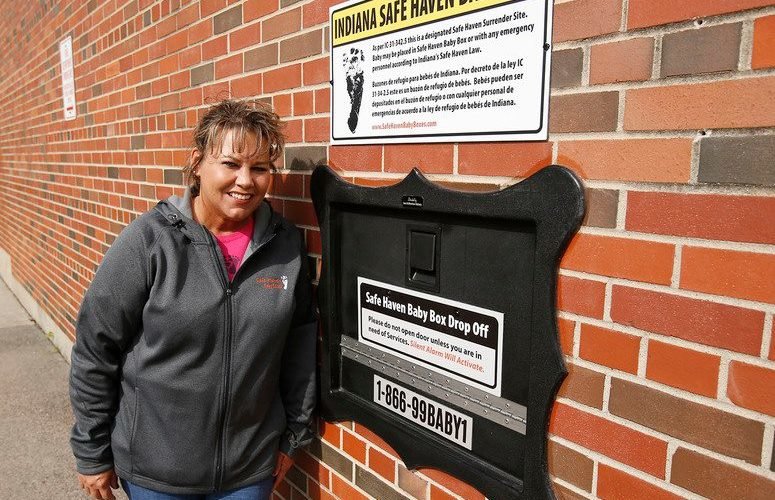 WOODBURN, Indiana, May 10, 2016 (LifeSiteNews) — With newborns increasingly abandoned, sometimes literally thrown in trash bins or flushed down toilets, one Indiana pro-life organization is installing “baby boxes” for mothers who feel they cannot care for their baby to ensure the child's safety.

When a mother opens the box – which is climate-controlled, padded, and circulates fresh air inside – a call is made to 911.  The box automatically locks once the mother shuts its door.  Motion sensors trigger a second, backup call to 911.

In three to five minutes, paramedics arrive and take the baby to the hospital for care. Indiana's Child Protective Services then takes custody of the child.

Monica Kelsey, who was abandoned as an infant herself, founded the Safe Haven Baby Boxes organization, which is sponsoring the depositories outside Indiana fire stations for mothers in crisis.

“As a child who was abandoned by my birth mother two hours after I was born, I am honored that Christ has me spearheading a program that will save the lives of abandoned children,” Kelsey told LifeSiteNews. “This is truly in His honor!”

So far, two boxes have been installed in the Indiana cities of Woodburn – near Fort Wayne – and in Michigan City.

But the Indiana’s Knights of Columbus, a Catholic fraternal organization, are aiming to sponsor 100 boxes across the state. The boxes can cost up to $2,000 each.

Facing a growing number of abandoned and murdered newborns, every state in the U.S. has passed a similar “safe haven” law. Proponents say the laws have saved hundreds of babies' lives.

“In Arizona they have been using 'Baby Drawers' for 10 years, with great success, saving babies from abandonment by giving women complete anonymity,” Ms. Kelsey told LifeSiteNews.  “There have been countless lives saved by their program.”

“We are now honored to be joining them in this fight to protect babies lives who might otherwise be abandoned and left to die,” Kelsey said.

Indiana's Safe Haven Law gives a mother 30 days after childbirth to give her baby to authorities, with no questions asked.

Shawn Sullivan of the South Bend (IN) Life Center told LifeSiteNews, “The Safe Haven Baby Boxes are founded upon the same ideal that our Life Center Advocates utilize in the streets with mothers seeking abortion: letting mothers know that there is an answer for every unwanted pregnancy, whether that’s safe-haven or adoption or some combination of medical, financial and legal assistance that enables the mother to keep the child.”

Sullivan continued, “There are options, and abortion does not need to be one of them.”

“We at The Life Center Legal read the Indiana State Department of Health report, and could find no compelling basis to have any legitimate problem with the Baby Boxes,” Sullivan added.  “The Baby Boxes are to enhance the existing laws on the books and give those potentially effected by the law another way to utilize the Safe Haven Law.”

Sullivan said the Life Center in South Bend is currently investigating whether they would be a feasible site for a Baby Box.

Proponents of the baby boxes say they save the lives of those who would otherwise be abandoned without further medical care, left to die.

But not everyone is applauding the Safe Haven Baby Boxes.  Indiana State Department of Health (ISDH) officials recommended they not be installed in a report released last December.

“A team of child health experts…carefully studied available research on newborn safety incubators,” ISDH spokeswoman Jennifer O'Malley told the Indianapolis Star, “and determined that there are no standards or protocols that can ensure the safety of children placed in these devices.”

But Kelsey says her organization responded to ISDH concerns, and their Safe Haven Baby Boxes have been tested and improved to ensure complete safety for babies.