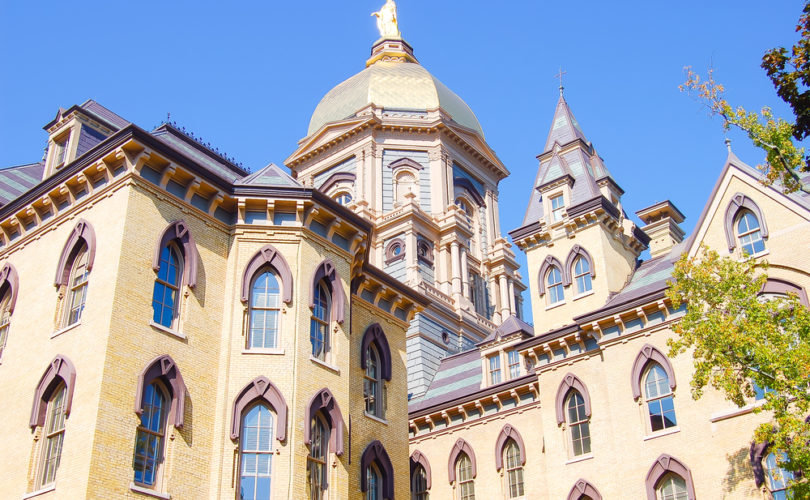 March 30, 2015 (CardinalNewmanSociety.org) — Indiana’s version of the Religious Freedom Restoration Act (RFRA) was signed into law on Thursday by Governor Mike Pence, protecting “the fundamental freedom of Indiana citizens from unnecessary and unreasonable government coercion,” as it was described by Ryan Anderson, the William E. Simon Fellow at The Heritage Foundation.

The law could serve as legal protection for the University of Notre Dame if it chooses to reverse its policy of providing employee benefits to same-sex spouses—a policy that is not required by Indiana law and which was publicly opposed by Fort Wayne-South Bend Bishop Kevin Rhoades last October.

“Indiana’s leaders have done their part, now Notre Dame needs to step up and demonstrate its fidelity to Catholic teaching,” said Patrick Reilly, president of The Cardinal Newman Society. “To do otherwise rejects the precious religious freedom that Catholic institutions should be cherishing and defending.”

It’s clear what Notre Dame should do to uphold Catholic teaching on marriage, but the Newman Society spoke to a Notre Dame alumnus and a Notre Dame professor who worry that the University won’t take up the opportunity.

William Dempsey, alumnus and chairman of the Sycamore Trust to promote Notre Dame’s Catholic identity, told the Newman Society that Indiana’s RFRA is a “welcome protection for institutions and individuals who don’t want to collaborate in what the Church teaches is grave sin.” But as long as Notre Dame neglects to uphold Church teaching, the law is “simply an embarrassment” to the University.

“Father Jenkins’ claim that the University adheres to the Church’s teaching now floats aloft with no visible means of support,” Dempsey contended.

Similarly, Notre Dame law professor Gerard Bradley agreed that the law can only make a difference if “Notre Dame decides on its own to change course and to restore the former policy of extending marital benefits only to husbands and wives.” Had Notre Dame stood strong for marriage, RFRA would be “one protection which Notre Dame could invoke” in the case of an employee filing a lawsuit against the University for denying marital benefits to same-sex couples.

Last October, Notre Dame announced that it would be implementing extension of benefits to same-sex spouses of employees according to “the relevant civil law.” It was a disappointing move for many, even generating a statement from Bishop Rhoades indicating his disapproval. The move also drew criticism from Bradley at the time, who lamented that the University “so nonchalantly, and without a whisper of resistance or even protest, rush[ed] to comply with such an unjust law.”

Dempsey pointed out that Notre Dame has never specified which “relevant civil law” required it to provide such benefits—there doesn’t appear to be any current mandate—and the real reason why the University chose not to pursue legal protection was left unanswered.

“Father Jenkins finally declared they were acting out of ‘love,’” Dempsey said, but he deems this explanation “a grotesque ‘love’ that encourages faculty, staff, and students to engage in grave sin by rewarding it with substantial benefits.”

The University of Notre Dame was contacted for comment on whether a reversal of its employee benefits would be considered, but a response was not received by time of publication.