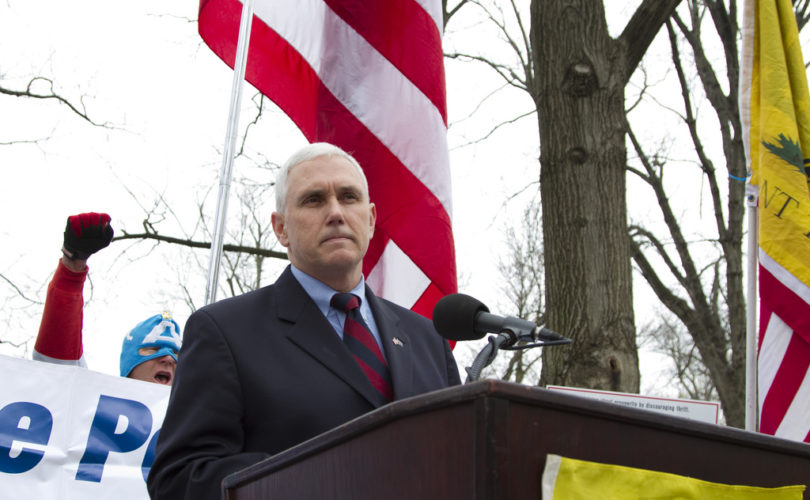 "As governor I have to see to it that the state operates in a manner consistent with Indiana law,” Pence said in a statement.Mark Taylor/Flickr

All but one of the same-sex “marriages” performed in Indiana in a 72-hour gap where they were temporarily permitted in the state will be treated as invalid by the state per an order from Republican Governor Mike Pence.

The “marriage” ceremonies took place in the interval between a lower court ruling declaring the state’s ban on gay nuptials unconstitutional, and a subsequent circuit court ruling ordering the ban reinstated pending appeal.

Gov. Pence issued the order in a memorandum (PDF) on Monday, explaining that the upper court’s order means that at least for now, state law still defines marriage as a union between a man and a woman.  As such, the state cannot offer marital benefits to same-sex couples.

“I appreciate the confusion that has been created by different federal court decisions, but as governor I have to see to it that the state operates in a manner consistent with Indiana law,” Pence said in a statement.

Supporters of true marriage praised the move, saying they hoped it would avoid the chaos that has occurred in other states, including Michigan and Utah, as judges continue to wrestle over the contentious issue.

“I think it's a prudent move and very wise to wait and see what the higher courts do with this,” Micah Clark, executive director of the American Family Association of Indiana, told the Indy Star. “It's a ping-pong ball going back and forth and it's best for the state to see what happens.”

Eric Miller of Advance America, a conservative advocacy group, said the lower court judge who originally struck down the ban is to blame for any confusion over the legality of the marriages performed in the hours following his decision.  Rather than waiting for the appeals court to issue a stay against his ruling, “[Judge Richard Young] should have immediately granted a stay while the issue is under appeal,” Miller told the Indy Star.

The memorandum issued by Governor Pence and his chief counsel Mark Ahearn said Indiana’s marriage law remains “in full force and effect.”  It instructed executive branch agencies to operate as if the lower court ruling had never been issued in the first place.

The memo did grant an exception to a single pair of lesbians who were specifically exempted from the higher court’s stay because one of them has terminal cancer. That couple was worried that even if gay “marriage” does eventually become legal in Indiana, their union might not be recognized because it occurred during the 72-hour window after Judge Young’s decision, which would result in the survivor being unable to collect death benefits.