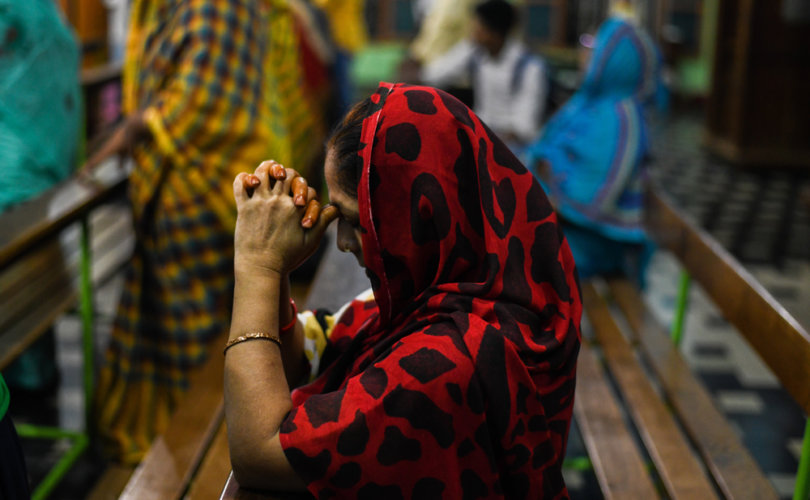 (LifeSiteNews) — A Catholic association in India is urging bishops to openly condemn escalating violence against Christians in India and to take action through measures such as legal aid, protests, and fasting.

The Forum of Religious for Justice and Peace, a group of Catholic clergy and laity in India, wrote to Cardinal Oswald Gracias of Mumbai, the president of the Catholic Bishops’ Conference of India (CBCI), asking him to lead Catholic prelates in breaking their silence on growing violence against Christians.

The letter points out that from December 24-25 alone, “the media reported 7 well-planned attacks on Christian Institutions across the country,” and that in 2021, “there were 486 incidents of violence against the Christian community in India, according to the United Christian Forum (UCF).”

According to the UCF, 2021 was the most violent year for Christians in India’s history. It marks a large increase from the previous record of 328 violent incidents of Christian persecution in 2019.

The letter goes on to say, “What shocks us is the complete silence on the part of the official Church, the CBCI. If we do not respond to such acts, the secular fabric of India will be lost causing irreparable damage to the people of India, and an inclusive, democratic and pluralistic India as envisioned in the preamble of the Indian Constitution could be lost forever.”

The ideal of an “inclusive” and “pluralistic” India is said to have been under increasing attack since the Hindu nationalist Bharatiya Janata Party (BJP) came to power in India in 2014, according to reports by the Christian persecution watchdog Open Doors USA.

UCF reported that “almost all” incidents of violence against Christians are motivated by anger against alleged forced conversions of Hindus. Christians, who only comprise 2.3 percent of Indian nationals, are often accused of using “monetary rewards” to convert Hindus, who make up about 80 percent of the country’s population.

The UCF further noted that such attacks are enabled by impunity under anti-conversion laws, “which presum[e] that Christians ‘force’ or give financial benefits to Hindus to convert them to Christianity.” Days before Christmas, Karnataka became the 10th state in India to pass such a law.

Such a law can in theory be used to condemn any Christian, since it considers the “threat” of “divine displeasure,” such as speaking about Hell, a method of force, according to The Christian Post.

Thus, after committing violence against Christians, the Hindus reportedly often hand them over to the police “on allegations of forcible conversions.”

Indignation against conversion of Hindus by Christians is so woven into Indian national policy that India’s Ministry of Affairs refused to renew Mother Teresa’s charity’s registration this past December following accusations that the Catholic missionaries have been converting Hindus.

To fight this current of Hindu animosity, the letter to Cardinal Gracias requests that he “have the CBCI respond immediately after harassment or attacks on Christian institutions,” “provide legal guidance and support to the victims of violence,” “organize a day of fasting at the Indian state capitals,” led by the bishops, “to protest against the increasing violence against minorities.”

Gracias is also asked to request, including through Indian Prime Minister Narendra Modi, that the “chief ministers of states” “take strict measures” to prevent such violence.

However, Modi is a member of the Bharatiya Janata Party (BJP) and of the Rashtriya Swayamsevak Sangh (RSS), a Hindu nationalist paramilitary organization. In October 2021, Mohan Bhagwat, head of the RSS, and “the ideological mentor of Modi’s BJP,” is reported to have cast conversions to Christianity in a negative light, which he portrayed as “demographic” changes that “need to be addressed.”

Bhagwat said in his annual speech on October 14 for a Hindu festival, “Rising population and demographic imbalance need to be addressed and population policy is to be redesigned …Illegal immigration in bordering districts and conversions in [the] northeast have changed the demographics further,” Al Jazeera reported, adding that India’s northeastern states have a large Christian population.

In 2005, the United States revoked a visa for Modi on the grounds that he was complicit in the Gujarat riots of 2002, during which more than 2,000 people were killed, and was responsible for “severe violations of religious freedom.”

Hindu nationalism’s sway over India’s law and justice system is also evidenced by the arrest of Father George Ponniah last summer for speech crimes because of comments “offensive” to Hindus.

During a meeting “convened to pay homage to late activist Father Stan Swamy,” Ponniah criticized government leaders for “preventing minorities from conducting prayer meetings” and “acting in favor” of Hindus, according to The Indian Express.

Ponniah also took a jab at the homage paid by a Member of the Legislative Assembly (MLA) to Bhārat Mātā, the national personification of India as a mother goddess. The MLA is said to avoid wearing slippers “out of respect to Bharat Mata,” and Ponniah reportedly said during the meeting, “We wear slippers to make sure we don’t get our feet dirty and to avoid getting any disease from Bharat Mata.”

Ponniah’s recorded speech went viral, and over 30 complaints were filed in different cities. He was charged with “promoting enmity between different religious groups” and arrested on July 24. While Ponniah was later released on bail, police have filed charges against him for his statements, and Justice G.R. Swaminathan has openly agreed that he deserves a trial, according to UCA News.

The judge stated in his order, “It is not necessary that all the Hindus should feel outraged. If the offending words outrage the religious feelings or beliefs of even a section of Hindus, the penal provision would be attracted,” UCA News reported.

He further accused Ponniah of “demean[ing] the Hindu community” and “putting them on one side and the Christians and Muslims on the other.”

“Those who fight against conversions do not regard Jesus as a false god or even a foreign god. They actually fight against the monopolistic claim that he is the only god and all other gods and goddesses are false,” Swaminathan said.

According to the judge, such a theologically “monopolistic” mindset “launched the world’s longest inquisition in India,” during which he said “St. Xavier ruthlessly destroyed Hindu places of worship and harassed Hindus.”

It remains to be seen how Cardinal Gracias and the CBCI will respond to the plea from the Forum of Religious for Justice and Peace, if at all, and if the response will bear any resemblance to that of one archbishop to the targeting of Ponniah.

Far from coming to Ponniah’s defense after his arrest, Archbishop Antony Pappusamy of Madurai told UCA News that he “disapproved of Father Ponniah’s alleged remarks,” and that “the Catholic Church does not support such statements.”

The plea letter to Cardinal Gracias concludes, “We are of the view that we Catholics cannot remain silent spectators when the drama of violent attacks against the minorities is unfolding before us. We need to act and fulfill our prophetic role before it is too late.”