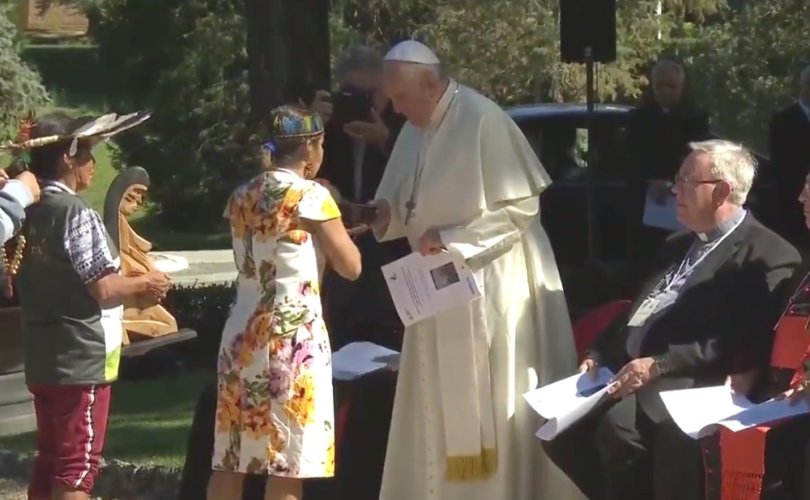 VATICAN CITY, October 4, 2019 (LifeSiteNews) – In a move which will most likely heighten the concerns of critics of the upcoming Amazon Synod, Pope Francis today participated in a “highly symbolic tree-planting ceremony” in the Vatican Gardens, where indegenous leaders offered prayers for the Earth and people bowed before carved images of pregnant women.

Participants planted the tree in dirt from the Amazon region (“celebrating the wealth of the bioregion’s cultures and traditions,” Vatican News explained) and India. Also brought in was “soil representing refugees and migrants, forced to leave their homes because of war, poverty, and ecological devastation” and “more soil from the Amazon, earth bathed in the blood of those who have died fighting against its destruction.”

“There was earth from places of human trafficking, and from sustainable development projects around the world,” according to Vatican News. The tree that was planted came from Assisi, a nod to today’s feast day of St. Francis, and Pope Francis used the occasion to consecrate the upcoming Synod for the Amazon to the protection of St. Francis of Assisi.

A female in ritual dress approached Pope Francis and appeared to place rings on his fingers, and then made the Sign of the Cross.

To some, this resembled a pagan fertility ritual taking place within the walls of the Vatican.

“The ceremony…looks like it was lifted from the Berkeley campus in the 60s,” said one priest in a Tweet. “How am I supposed to take it seriously?”

“The only question that interests me is what His Holiness's prepared comments were and why he set them aside,” he added.

Like … when they have a ceremony that looks like it was lifted from the Berkeley campus in the 60s, how am I supposed to take it seriously?

The only question that interests me is what His Holiness's prepared comments were and why he set them aside.https://t.co/pUYPXxCBk6

After event participants knelt and bowed to the statues of pregnant women, Pope Francis “set aside his prepared remarks, opting instead to offer the Our Father without comment,” CNA reported.

The event was organized by the Pan-Amazonian Ecclesial Network, the Order of Franciscan Friars Minor, and the left-wing Global Catholic Climate Movement. The Global Catholic Climate Movement includes working groups that “coordinate Catholic engagement in the Paris Agreement” and promote “Climate Strikes” and “fossil fuel divestment” to youth. Its executive director “served in the UN Climate Secretariat doing political outreach and comms for the COP21” – a UN climate conference – and has worked for Google, according to his bio. The group also offers a free guide that teaches strategies on forming parish “green teams,” “engaging parishioners on low carbon lifestyle choices” and “advocating for climate justice.”

“Various religious congregations and representatives of the indigenous people of the Amazon Region played important roles in providing colour and creativity” for the tree-planting ceremony, according to Vatican News.

Cardinal Peter Turkson, Prefect of the Francis-created Vatican Dicastery for Promoting Integral Human Development, also participated in the unusual Vatican ceremony. He said the “Season of Creation” is also “a season to respond to the ecological crisis” and suggested that Pope Francis’ message for the World Day of Prayer for Creation is “a time of change: humanity’s turning a new leaf to save the planet.”