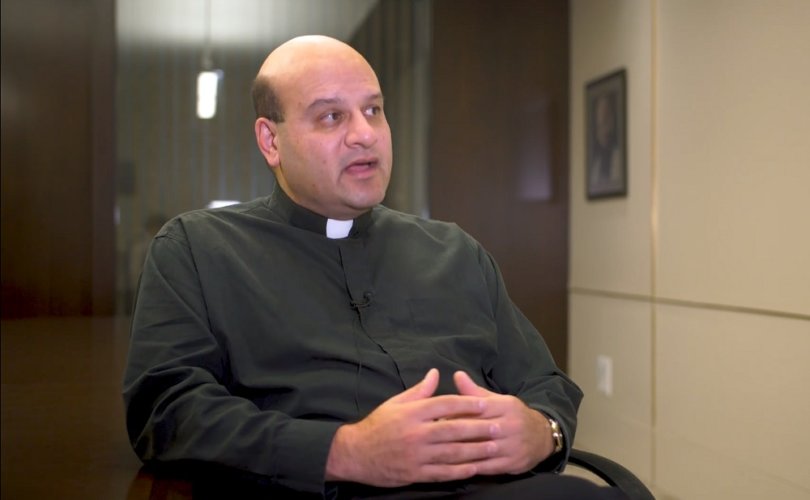 Fr. Raymond de Souza, editor of Canada’s Convivium magazine and a columnist for the U.K. Catholic Herald, wrote last week of the pontiff’s June decision to give representatives of Bartholomew, the ecumenical patriarch of Constantinople, a reliquary housing nine bone fragments belonging to the first bishop of Rome.

The majority of St. Peter’s relics are under the high altar of St. Peter’s Basilica, de Souza explained, but Paul VI had taken these fragments to keep in the private chapel in the papal apartment.

De Souza recalled that when Francis gave the relics away, the pontiff told Bartholomew’s delegation that he had first thought of it the night before.

“I no longer live in the Apostolic Palace, I never use this chapel, I never serve the Holy Mass here, and we have St Peter’s relics in the basilica itself, so it will be better if they will be kept in Constantinople,” he quoted Pope Francis as saying.

“This is my gift to the Church of Constantinople. Please take this reliquary and give it to my brother Patriarch Bartholomew.”

The columnist didn’t think the fact that the Apostolic Palace is unoccupied by Peter’s successor is sufficient reason to give Peter’s bones away. For one thing, there is no connection between St. Peter and Constantinople. In fact, the link between Peter and Rome is so strong that when Rome was replaced by Constantinople, then called Byzantium, as the capital of the Roman Empire, the popes refused to follow the emperor in leaving Peter’s city.

“The rationale that the relics were languishing in the unused papal apartment is not sufficient to transfer them to Constantinople,” de Souza stated. “They could have been moved to the chapel of the Domus Sanctae Marthae, where the Holy Father does pray.”

“If it was thought that Rome had a superabundance of Petrine relics, the fragments could have been sent to Antioch, the first place where Peter was bishop, before he moved to Rome.”

De Souza contrasted the almost spontaneous handover of St. Peter’s relics, which he deems among the most precious items of which the Vatican has custody, with earlier transfers or “translations” of relics from one city to the next. He revealed that the Feast Day of Saint Stephen has pride of place right after Christmas because December 26 marks the day when the relics of this saint were translated to Hagia Sion, a Byzantine basilica in Jerusalem, in 415.

“Bartholomew came to Rome to venerate the relics together with John Paul in a public celebration, and the two exchanged formal addresses explaining the significance of the occasion,” de Souza recollected.

John Paul II told Bartholomew, “In the transferral of such holy relics we find a blessed occasion to purify our wounded memories in order to strengthen our journey of reconciliation, to confirm that the faith of these Holy Doctors is the faith of the Churches of East and West.”

Quoting his own Orientale Lumen, John Paul said they were also “witness to a favourable moment to ‘show in word and deed today the immense riches that our Churches preserve in the coffers of their traditions’.”

In response, Bartholomew described the relics of the Eastern saints as “returning home” and emphasized the joy of the occasion, saying “the transferral and return of the relics of our blessed Predecessors to the Most Holy Archdiocese of Constantinople, which they have glorified with their holiness, wisdom, struggles and apostolic work in general, is a cause of joy and exultation, not only for our sacred Ecumenical Throne and for the pléroma (fullness) of the whole of our Most Holy Orthodox Church which deeply reveres them, but also for all our Catholic brethren who reside in our See.”

“You are following the example of St Basil the Great,”  he quotes Bartholomew as saying to the late pontiff.

“He returned the venerable relics of St Dionysius, Bishop of Milan, who fell asleep in the Lord while in exile because of the Arians. He was buried in the region entrusted to St Basil himself, as the Saint mentioned in his Letter addressed to St Ambrose, the successor of St Dionysius,” the patriarch continued.

“The Church throughout the world, adorned by the venerable blood of the Martyrs — like purple vestments and fine linen — properly respects the relics of her children who in the Lord bore painful sufferings, crucifixion and death, inflicted by wild beasts, fire, the sword and countless adversities.”

“One could only imagine what Bartholomew would have said upon jointly venerating the relics of St Peter in a similar circumstance,” de Souza remarked. “But he didn’t have the chance.”