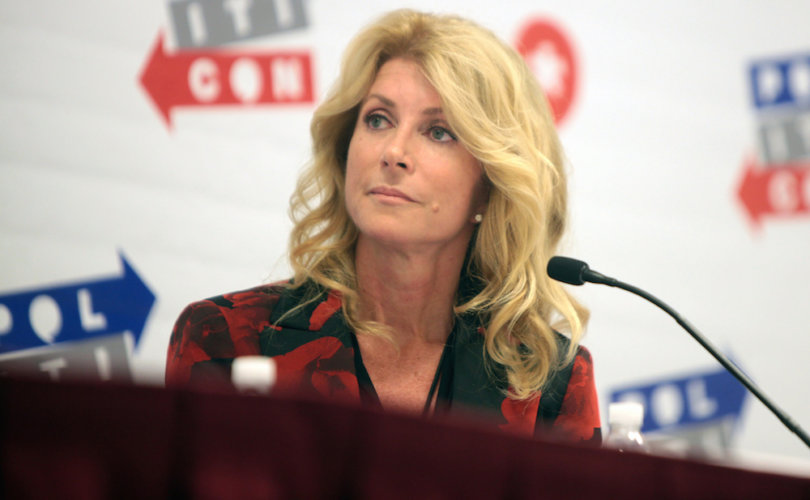 TEXAS, July 22, 2019 (LifeSiteNews) – Wendy Davis, the former Texas state lawmaker who made a national name for herself filibustering on behalf of late-term abortion, is throwing her pink sneakers back in the political ring with a new bid to join the U.S. House of Representatives.

Davis announced Monday that she is running in the Democrat primary for Texas’ 21st congressional district, the Texas Tribune reports. The party’s nominee will go on to face the Republican incumbent, freshman Rep. Chip Roy.

“I'm running for Congress because people's voices are still being silenced,” Davis declared in her announcement. “I'm running for our children and grandchildren, so they can live and love and fight for change themselves.” She claimed that if elected, she will “work to end divisiveness and to create the kind of unity that really helps to solve problems.”

Roy responded by dismissing the notion that her left-wing views would appeal to a majority of the district:

Wendy Davis’ radical & extreme views will no doubt excite the likes of Nancy Pelosi & other DC liberals. I will continue fighting for the hardworking families of #Tx21 & the commonsense values that make Texas everything Washington is not. #Life, #Liberty, & #PursuitOfHappiness

“It’s beyond parody that Wendy Davis is attempting to make her political comeback in a district she lost by 20 points last time around,” National Republican Congressional Committee spokesman Bob Salera responded. “Texans resoundingly rejected Davis and her socialist agenda 5 years ago, and will do so again in 2020.”

Davis rose to national prominence in 2013 by engaging in an 11-hour filibuster against a bill to ban abortions beyond 20 weeks, when preborn babies can feel pain. She failed to stop the bill from becoming law, but succeeded in becoming a national celebrity in pro-abortion circles.

While left-wing figures declared her a hero for “women’s rights,” pro-lifers seized on her subsequent comments, such as claiming that women who oppose late-term abortion “don’t really understand” the issue, and admitting she was largely ignorant about the case of Kermit Gosnell’s largely unregulated abortion business.

Other Democrats who have filed to run so far include Llano County party chairwoman Jennie Lou Leeder and educator Bruce Boville. But the Tribune notes that Davis will have strong backing for the nomination; House Speaker Nancy Pelosi and most of the Democrats in the Texas House delegation are throwing an event for her in the nation’s capital.